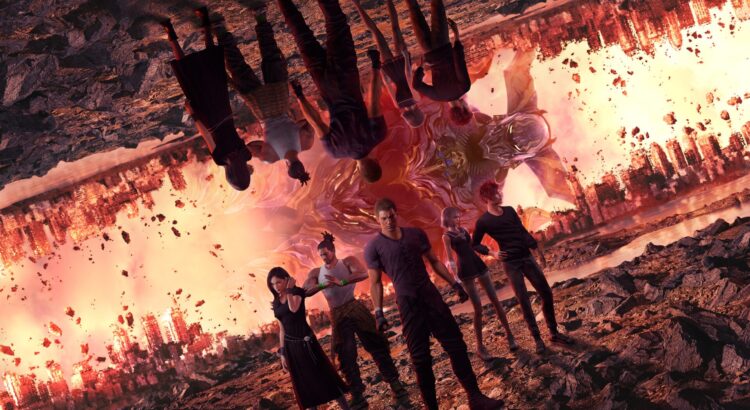 This year marks the 35th anniversary of the Final Fantasy franchise, and what better way to celebrate it than Square Enix teaming up with Team Ninja and releasing a character action game that retells the events of the very first Final Fantasy, but in a very dumb and surprisingly fun way? Stranger of Paradise: Final Fantasy Origin is just that, a weird experiment of a game that happens to bear the name Final Fantasy, even though it’s not really the first attempt at turning an entry in the series into anything but an RPG.

Set in a world that’s somewhat standard for a Final Fantasy game, that is, one with an eclectic mix of technology and medieval elements, Stranger of Paradise: Final Fantasy Origin stars Jack, a man of not many words but a lot of brawn and gruffness. Joined by two other four-lettered named grunts and a mysterious girl, they are what the king of the land calls the legendary four Heroes of Light. Charged with ridding the world of the threat of an entity known as Chaos, well, our plucky group is off on an adventure, learning a whole bunch of jobs and gathering a boatload of gear along the way.

It’s been said that this game is one of those times when things are done in such an ironic way that it ends up just being plain funny, and I have to agree. It’s clear that Team Ninja’s way of designing games and coming up with stories is basically set to 11 in the ‘overdoing it’ scale. If I had to draw a comparison between Stranger of Paradise: Final Fantasy Origin and any other game, it would be their own Metroid: Other M. In the same way Square Enix lent one of their most valuable franchises to Team Ninja, Nintendo did so with Metroid, and look where that ended up – a middle-of-the-road action game with a horrible story that uncharacterized Samus Aran into a bumbling Yes-girl.

On the other hand, Stranger of Paradise: Final Fantasy Origin doesn’t have a whole lot to break apart when it comes to story, given that the game it attempts to retell is the original Final Fantasy, which didn’t really have much of a story to begin with. So other than some events from that game taking place in Stranger of Paradise, it has free reign to do whatever it wants, and it sure does. If you come into this expecting to get a traditional Final Fantasy story, you’re bound to be disappointed.

Let’s not kid ourselves though, protagonists in the series haven’t had a stellar track record when it comes to being likable. It took three games for Final Fantasy XIII’s Lightning, for instance, to come close to being anything close to that, and Squall from Final Fantasy VIII, hell, if you have three hours to kill I could go on about how shallow of a character he is. Still, even then, Jack and company are even more paper-thin than your average action game set of protagonists. The only one that holds even a tinsy bit of depth comes in the form of the team’s fourth member, Neon, but not by much.

So what’s the draw to playing Stranger of Paradise: Final Fantasy Origin, you’d probably asking this review. Well, first things first, you shouldn’t be talking to a web page. This being a Team Ninja game, the gameplay’s where it’s at. Known for their fast-paced, bloody and all nonsense blockbuster action games, they’ve clearly given their best effort in Stranger of Paradise. Even though it’s nowhere near the level of tightness of Nioh or Nioh 2, the combat in the game is certainly enjoyable and somewhat rewarding.

Taking a cue from bona fide Final Fantasy, you can change into a number of different jobs throughout Stranger of Paradise, where you can use different abilities and level them up individually via skill trees as you see fit. Having played a bunch of Final Fantasy XIV over the past few months, it’s fun to see familiar class powers that are used in an entirely different setting in that game making an appearance in a more action-focused manner.

For as stiff as the fighting feels at times due to the clumsiness of the lock-on and overall character movement, there’s much enjoyment to be had button mashing your way through encounters which there are a lot of throughout every single level of the game. Split into small arenas that are locked off by walls you punch your way through after clearing enemies, each area you explore in a mission is designed as corridors you navigate with little in the way of circling around, with save points every so often.

Aside from your combat skills based on the job you’re currently equipped with, you can also make use of two separate means of blocking attacks, as well as absorbing certain kinds of enemy attacks, which you can then use against them yourself. The bread and butter defense works the same way as in your usual action game, but the real charmer is the soul burst, a gamble that can be pulled off with proper timing that can pay off in a bunch of damage to whoever’s on the other end.

Team Ninja likely has hoarders working in the studio since Stranger of Paradise: Final Fantasy Origin is yet another one of their games that features loot. Way too much of it in fact. Every combat encounter gives you loads of crap to carry around and equip, so you better get used to tabbing out to the character equipment menu in order to swap out weapons and armor. It’s yet another silly aspect to the game, one that strips away any semblance of value from anything you happen to pick up and use since it’s bound to be replaced in a manner of minutes.

The mission structure in the game has you jumping from level to level from the main map, which hilariously enough also works in having you engage in conversations with random people instead of actually exploring the spaces the group walks around in during cutscenes. Then again, a lot of games have you waste time doing exactly that only to read line after line of meaningless dialog, so this approach might be a blessing in Stranger of Paradise’s case, especially since there’s little in the way of depth to anything relating to its story.

Outside of the handful of trademark Final Fantasy tunes like the crystal’s theme and a number of town songs playing throughout the game, the rest of the soundtrack is very general rock and for about thirty seconds, a part of Frank Sinatra’s “My Way,” if things weren’t weird enough. Then again, Final Fantasy XV featured the entirety of a remix of “Stand By Me” during its opening, so who am I to judge Square Enix’s taste in music?

The Final Fantasy games are known for pushing the envelope when it comes to visuals, but this isn’t the case with Stranger of Paradise: Final Fantasy Origin. Character models look okay when still, but as soon as any dialog is played, they just look wrong, lips flapping like fast-forwarding marionettes. The overall detail of textures looks blurry even on PlayStation 5, and there’s not much to it that honestly screams next-gen.

In sum, Stranger of Paradise: Final Fantasy Origin is a serviceable action game that just happens to be set in Square Enix’s number one RPG franchise. The story is as throwaway as it can be, and it’s clear that the focus of the game is providing an entertaining if totally brainless character action brawler, which you shouldn’t take with even a little bit of seriousness. It’s dumb and it probably knows. At least I hope that it knows that it’s silly, you wouldn’t want to be the only one in the room who’s in on the joke, right?