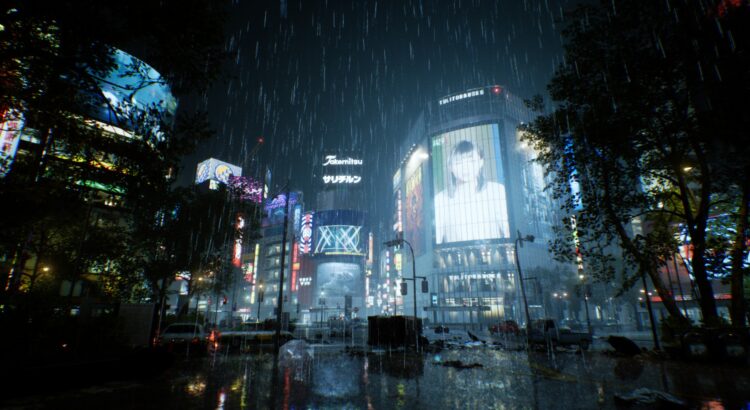 Everyone is dead. Even your character is dead (or was). Lead character Akito is a corpse who wakes up to what seems like the end of the world; the entirety of Tokyo’s Shibuya district completely depopulated, people’s clothes, phones and other belongings strewn all over the roads and pavements, with their cars and trucks crashed into each other. The world has become overrun by monsters from Japanese folklore, many of whom want to see you dead (again) but some of whom are friendly.

That is the world Ghostwire: Tokyo immerses you into from the outset, and the weirdness doesn’t really let up as the game continues. While the open world format is rather rote and relies too much on repetitious side quests and similar collect-a-thon activities, the uniquely beautiful world of empty downtown Tokyo mixed with ghostly apparitions is successful in maintaining engagement, at least for a while.

The main plot of Ghostwire: Tokyo involves Akito and his ghostly co-inhabitant KK (whom partially takes control of his body in the opening cutscene) searching for “the man in the Hannya mask”; the evil spirit/person who has brought havoc on the world and killed several hundred thousand people, cutting Shibuya off from the outside world. At the same time, the man has also kidnapped Akito’s younger sister from Shibuya Central Hospital, who somehow needs to be involved in some kind of terrible ceremony to inflict the same disaster upon the entire world.

The voice acting is available in both Japanese and English, although I much preferred the original Japanese dialogue with English subtitles (and indeed it defaults to this). The plot is delivered fairly slowly as you’ll regularly be engaging in a variety of side activities, mostly given by friendly spirits who require you to solve a particular problem which happened during their life, preventing them from seeking eternal rest. The writing for these side quests can be good, but the quests themselves become somewhat formulaic after a while, although they can often take place in a unique new building to explore.

In terms of gameplay, Ghostwire: Tokyo is probably closer to a first-person open world shooter than anything else. Akito is equipped with a variety of spirit-weaving powers, harnessing the elements of wind, water and fire. Wind acts as your “pistol”, allowing for rapid fire attacks on enemies, while water is the shotgun equivalent and fire, the grenade launcher. The enemies are all some corrupted version of stereotypical Japanese groups; faceless Slenderman-esque salarymen dressed in ragged suits and carrying bedragged umbrellas, headless schoolgirls in their uniforms, prim shop assistants or trenchcoated women. They deal both melee and ranged attacks, which you can block using middle-mouse or attempt to dodge.

Once you’ve hit enemies enough you’ll explore their “core”, which can then be destroyed to insta-kill them. Alongside fighting offensively, you’re also given a bow which can use used to silently takedown enemies at a distance (although stronger foes may require more than one arrow), as well as the ability to sneak up behind enemies and perform stealth kills. This variety normally meant that I focussed on stealth killing and using the bow until I was discovered, before using my magic to mop up the remaining monsters. The combat does look very impressive and is broadly satisfying, but the magic always feels somewhat intangible, perhaps by its very nature. It’s not bad, but it’s not best in class either.

As well as fighting, you’ll also be exploring Tokyo, clearing the map of areas of impenetrable fog (which drains your health if you enter it) by cleansing Toki gates of their dark energy, in a manner reminiscent of the Far Cry watchtowers. You also need to regularly gather groups of floating spirits; the people who died during the initial opening decimation of Shibuya. You collect these spirits using katashiro (a traditional Japanese paper doll) which you then take to any phone booth in order to “save” by transferring them out of the quarantine zone to KK’s colleague (sending ghosts along the wire… ghostwire). There are about a quarter of a million souls to save in total (similar to the entire real-life population of Shibuya), the percentage of which you’ve saved is tracked in the menu screen. Saving souls rewards you with XP, allowing you to upgrade Akito with new abilities, improving his spirit-weaving abilities, or giving him other upgrades such as carrying more food or arrows.

There is also an exhaustive index where you can browse through every note you’ve picked up, descriptions of every food item, as well as overviews of each enemy of monster from Japanese folklore, not all of which are necessarily evil. For example, all of the convenience stores in Shibuya, absent of their usual human staff, have been taken over by feline nekomata; friendly floating cats who will sell you food and other items. You can also take on quests for particularly prized items from certain nekomata, which will reward you with money, new clothes or other bonuses.

One thing I do think the game excels at though is atmosphere. The open world of downtown Tokyo is one of the most gorgeous settings I have ever seen in a video game. The rain drenched streets, with so many ray-traced reflections on both the road surface and the buildings, all of which are eerily deserted heavily reminded me of The Chinese Room’s game Everybody’s Gone to the Rapture, which likewise featured a realistic setting (in that case, a British village) completely devoid of ordinary humans. The fact that in real life this setting is almost virtually never empty (indeed usually full of people) makes the setting more memorable for me. That said however, despite its marketing somewhat playing this up as a horror game, there’s not really anything scary here. It’s creepy occasionally, but nobody should come expecting anything close to Dead Space levels of scares.

At its heart, despite how different Ghostwire: Tokyo may appear on the surface, it is essentially an open-world shooter in the vein of something like Far Cry 6 or Homefront: The Revolution. Although the world is staggeringly beautiful, most of the time you’ll be paying relatively little attention as you move about Shibuya doing varieties of repeatable busywork; collecting spirits to save, fighting groups of enemies, finding collectibles to take to the nekomata.

But even though it’s “another one of those games”, I still found it surprisingly compelling. I liked doing the little sidequests to help a young girl’s spirit find her grandmother’s old umbrella (which had become possessed), or helping a group of friendly tanuki (Japanese racoon dogs) reunite with their boss. I liked reading the thoughts of the cats and dogs, wondering where all the humans went. If it had been a bit more adventurous, Ghostwire: Tokyo could have been something very special, and although gameplay-wise it plays it safe, there’s enough weirdness and personality here to make it worth a visit.