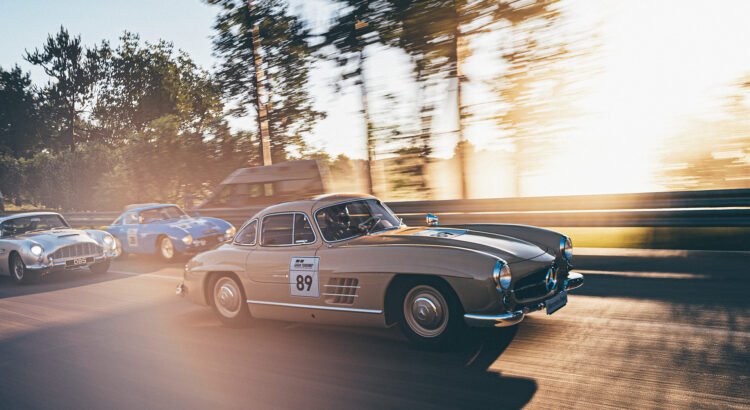 Have you ever had a friend who’s really into something? So much so that they sometimes come off as a bit crazy, but you still enjoy hanging out with them regardless because in the end they’re so passionate that it’s somehow contagious? Well, Gran Turismo 7 is like that. It’s SO into cars, their history and every facet of driving that even if you can’t tell a shift clutch apart from a brake disc, you won’t be able to help but be fascinated about its existence.

Gran Turismo 7 is the latest entry in Polyphony Digital’s long-running racing simulation series that started on the first PlayStation. Back then, Gran Turismo was incredibly unique, because it was the debut console game to take racing seriously and provide a realistic enough experience in game form of driving a car around a track. It was very in-depth for the time, and for someone like me, who’s always had a knack for appreciating auto racing somewhat casually, Gran Turismo 2 especially came at just the right time. I was in school and I had a lot of time to kill, so that game took over and didn’t let go for months.

Over the years, though, I played less and less of Gran Turismo for many reasons, but mostly due to converging facts: with each new game, there was more to do and more stuff in the way of the actual racing, and I had increasingly less time to play games as an adult. In fact, ridiculously enough, even though I own all of the Gran Turismo games over all four generations of PlayStation, their total playtime probably doesn’t add up to a fifth of what I played of Gran Turismo 2.

So to my surprise, for as much as Gran Turismo 7 tries to keep me from actually racing with all of its slow to pop text boxes, excessive videos, and cluttered menus, I’ve been putting some quality time in daily, plucking away at challenges and hell, enjoying my time with it quite thoroughly. Is it the best racing game I’ve ever played? Surely not, but it’s put together in a way that makes for some good bite-sized slices of gameplay for a few minutes to an hour total a day.

Gran Turismo 7 consists of a number of different locations on a map that would otherwise be menu items in any other game. You can check the cars you own in the garage, go buy new or used one at either car shops, where you can also check out each vehicle’s extensive history files, go to the museum, buy new parts, take pictures, have a coffee, or hey, actually do some gosh-darned racing.

That’s right, you get to sit and listen to some geezers go on and on while sipping on a cup o’ joe in this game, or as close to it as possible, except for the coffee. In fact, the café is the most important location of all as it gives you quests to partake that slowly doles out new game features and special events as you collect cars by participating in events and tournaments. And you guessed it, with each new one of these that you complete, you get a lesson about something relating to cars. I told you Gran Turismo 7 is quirky, so stop rolling your eyes!

It would be easy to fault developer Polyphony Digital and franchise director Kazunori Yamauchi for their overly eccentric delivery with Gran Turismo 7 if the racing itself was no good, but it’s anything but bad. In fact, it’s the best that it’s been in years, thanks in no part to the DualShock 5 controller’s haptic feedback, which is amazing in this game – making you feel every bump and crack in the road, puddles and whatnot, as well as your car’s gear shifting, engine roar – but also to the varying sense of control tightness that each kind of car provides while tearing around tracks, and also the scaling options for driving assists that are incredibly customizable. It’s been a long time since I’ve been into a racing game this much, where I’m looking forward every day to driving around, and for as little as it might end being, I’m feeling rewarded each time.

Things like getting a racing license, for example. I probably spent half my time with Gran Turismo 2 managing to perfect my skills and attaining all golds on all the tests, earning all of the prize cars that way, and it’s been the same with Gran Turismo 7. License tests have been a mainstay feature for every Gran Turismo game admittedly, it’s nothing new, but they’re there because they work. And the ease of getting in and out of these tests due to the PlayStation 5’s SSD speedy loading has provided me with reason to take a quick break now and then to just try to get a better time, which has been loads of fun.

Graphically, cars-wise, Gran Turismo 7 is an absolute gem. The series has always been on the forefront of visual fidelity, and 7 continues that trend in grand fashion. Just about every box in any graphic nut’s list gets ticked in this one, including the fantastically technical real-time fresnel effect, which gives cars even more realistic reflections. Weirdly enough, actual model damage is nowhere to be seen, as it’s been for Gran Turismo series as a whole and has been a part of Forza Motorsports and Project CARS, for instance, for years, an omission that is baffling to say the least.

Locations are less so impressive, but not at all ugly. They’re just not as detailed as the cars, which is understandable to a certain degree due to possible technical limitations, although they are visible breaks in the realism if you look closely at still shots from the game. However, it’s nothing you’ll notice while tearing through the brand spanking new version of old fan-favorite Trial Mountain at 300 kilometers an hour, trust me.

Sony and Polyphony have come under fire for the game’s economy, and for good reason. Very little cash is awarded by simply playing Gran Turismo 7, and regardless of the fact that every so often you get spins at the roulette which can potentially give out cash prizes, it’s still a slow burn. To make things worse, there’s always the constant flashing icon on screen that offers cash via microtransactions and real world currency.

Director Yamauchi has recently gone on record to state that this is being looked into and will be patched to make things more balanced, but not before being somewhat dismissive of players’ concerns about the in-game economy. The fact remains that Gran Turismo 7 started out like this and has only gotten worse with post-release patches that have cut back on in-game event prizes, pushing you to buy currency via PSN or keep playing for even longer in order to earn the same amount.

Worst yet, Gran Turismo 7 is a game that demands you to be constantly online in order to work. That has already proved to be a terrible decision given that the game has gone offline for well over 24 hours recently due to an error introduced in a patch, making it practically unplayable outside of the music rally mode. They tried to make good by giving out a million in-game currency, which is all good and dandy, but haven’t implemented any sort of measure to make features available offline, which is worrying not only now, when the game is brand-new, but even more so for Gran Turismo 7 in the future, for whenever Sony decides to shut off servers and kill it outright.

These are problematic business practices that can hopefully be addressed further if the public makes enough of a fuss and prompts changes to be made in order to improve the overall experience and future-proof Gran Turismo 7. It’s silly to think that Sony and Polyphony did not see this coming when planning out how the game would work, so it would be naive to think that the current outcry is enough to steer the Gran Turismo 7 or even its sequels in the right direction unless it results in lower sales.

As it is now, though, for someone like me who’s casual enough not to be constantly after the next new shiny car but worried enough about not being taken advantage of when I just want to play the game as I should, Gran Turismo 7 is quite enjoyable – when it’s working, mind – if not somewhat bloated. Then again, it’s the sort of bloat I can overlook due to my passing interest in driving fast cars and racing. To someone who just wants to jump in and put their pedal to the metal, though, the eccentricity that comes in the form of its presentation and slow pace of its delivery will come as definite turn offs to Sony’s 7th iteration of the “Real Driving Simulator”.