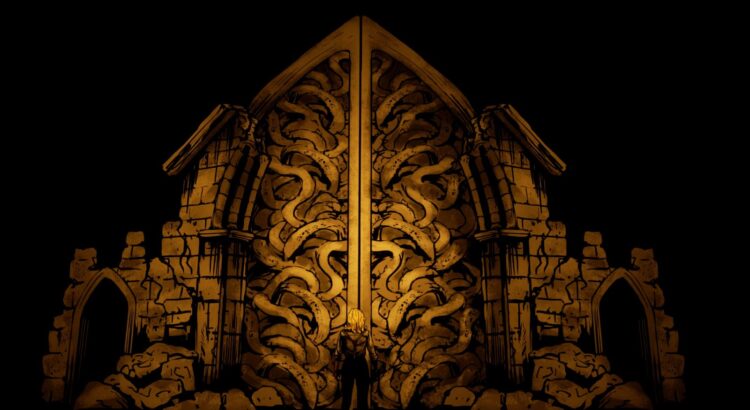 In 1996, id Software named the final boss of Quake “Shub-Niggurath”, and it represented an early high watermark for the influence of H.P. Lovecraft on first-person shooters. The “weird fiction” author died in 1937 but casts a long shadow over videogames, and Forgive Me Father is the latest example. The game is developed by Polish studio Byte Barrel, who have made an interesting sideways move: from games based on the TV series Mythbusters, to a game based on the Cthulhu Mythos.

Being both a Lovecraft game and a retro-influenced “boomer shooter”, Forgive Me Father bravely competes in not one, but two fields which are presently very crowded. The game is better than most at conjuring up a cosmic horror atmosphere, and will tick a lot of boxes for those already initiated into the cult of ‘90s-style shooters. It is arguably a little too rough around the edges to rival the boomer heavyweights like Dusk and Ion Fury, but Forgive Me Father carves out an suitably ominous niche all of its own.

Compared with Lovecraft’s famously purple prose, the setup and story are simple. At the outset, players choose to control either a male priest or a female journalist. In either case, the story begins in the New England town of Pestisville, a doomed setting in the tradition of Dunwich or Innsmouth. It immediately becomes clear that the town is plagued by a full house of cultists, fishmen, mutants, possessed soldiers, and the undead. Neither the priest nor the journalist fit the helpless, overawed model of Lovecraft protagonists. Far from cowering in fear, each of them gradually amasses an arsenal and declares war on these threats to their sanity and to the world.

Forgive Me Father is structured similarly to the classic FPS games of the ‘90s, in that it consists of around numerous short levels split into five chapters. Each section of the game has a loose unifying theme and ends with a climactic boss battle. Level design is relatively unsophisticated compared to the current frontrunners in the retro shooter genre. Early levels in particular are quite boxy and lacking in verticality; progression is arranged mostly around the classic red, blue, and yellow keys pioneered by the original Doom. To be fair to Byte Barrel, though, the levels do become more ambitious and interesting as the game progresses and especially as it goes beyond the chapters available in the early access release.

Throughout the game, what Forgive Me Father lacks in level design quality is made up for with sheer environmental variety. The game has numerous similarities to Monolith’s 1997 classic Blood, and one of these is that almost every level introduces a new and interesting location. Over the course of the story, players will shoot their way through town streets, a slaughterhouse, a hospital, a secret lab, a forest, a farm, a windmill, and many more. Byte Barrel can make no claims to telling a compelling story – or much of a story at all – but their environmental design is imaginative, and each level is a new surprise. To extend the experience, an endless mode is available, with new levels unlocked each time a boss is defeated in the main story.

Adding to the atmosphere of the game is its distinctive look. Forgive Me Father runs on the Unreal engine, which provides for some modern effects like reflections, volumetric fog, and coloured lighting. In other respects, the game is determinedly retro in appearance. While level geometry is fully 3D, most other elements are composed of 2D sprites – this means weapons, enemies, decorations, and item pickups. These are rendered in a comic book style, and there are also speech bubbles and written sound effects (“BOOM!”). All of this brings to mind XIII, another clear influence. There is a sense that the various aesthetics in the game don’t quite gel together at times. For example, the game’s more intense battles are soundtracked by some metal music which is emphatically gnarly – but it can seem a bit out of place in a game set in the 1920s.

Those battles tend to impress because the shooting is very solid. The weapons range from the prosaic to the cosmic, from a pistol and a shotgun to a living, squirming rocket launcher of sorts. There is even a new take on the devastating Tesla gun from Blood. In one of the game’s more unique features, weapons can cross the divide from ordinary to otherworldly thanks to an experience-based upgrade system. The humble knife can be changed first into a stack of throwing knives, and later into a writhing, alien version as if transmuted by “The Colour Out of Space”. Similarly, one of the sub-machine guns can be repurposed as a grenade launcher powered by a sickly green goo.

The hand-drawn sprite weapons are great to look at and even better to use. The enemies are quite varied, which helps to make up for the rather rote encounter design – especially in the early levels. Unfortunately ammo and health balance can be a problem. While the player is often swimming in ammo for their pistols, other kinds of firepower are withheld to a frustrating degree. Should the priest or journalist go for the grenade-launching SMG option, for example, they will be unable to use it for whole levels at a time because of how harshly Byte Barrel ration explosives. Health pickups can also seem meagre, even on normal difficulty. Some players will dislike this sense of starvation, especially when combined with the saving system. Saves can only be made at specific intervals, when a grog-swilling sailor is found sitting by a special Cthulhu totem.

Thankfully, the relative lack of ammo and health can be mitigated to some extent by using special abilities. These are the main things which separate the two player character options. Powered by a madness meter charged by killing enemies and drinking alcohol, these include a voodoo doll, a healing cross, and an equivalent of Doom’s berserk pack. As with weapons, they can be upgraded using skill points but the skill tree is much too large to complete in any given playthrough – so difficult decisions must be made. Naturally, this adds to replayability. Pestisville’s evil can be pursued to its source in seven or eight hours, but many players will find the idea of a second run appealing.

Forgive Me Father can seem a little off the boomer shooter pace at times. While attractive, its aesthetics could be a bit more cohesive – for example, a pulsating Lovecraftian HUD would be much more appropriate than the flat comic book one that Byte Barrel went for. The level designs are certainly not as inventive as the ones found in the best of the genre. With that being said, the game has a lot to offer retro shooter enthusiasts and from time to time, it comes together wonderfully. At its best, Forgive Me Father is an even more compelling occult retro shooter than Dusk. One level is particularly memorable – a forest at night, with hundreds of pitchfork-wielding cultists closing in from all sides. At times like this, when the game’s spell is at its strongest, Forgive Me Father is more than worth the risk to your sanity.