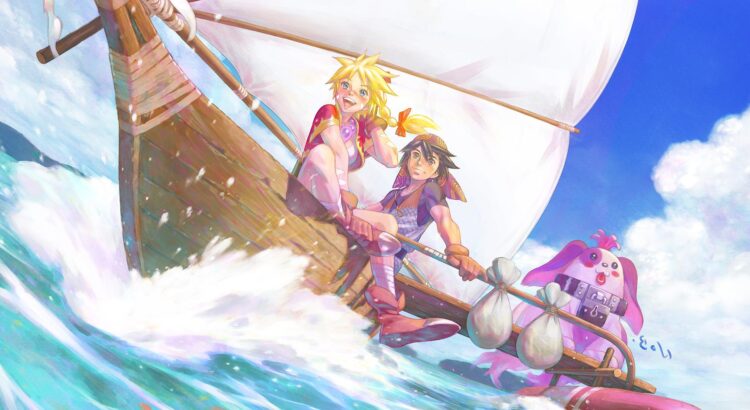 It’s kind of shocking that even though Chrono Trigger is such a beloved RPG and has gotten a number of re-releases, its sequel, 1999’s Chrono Cross hasn’t up until now. So the announcement a couple of months back that it was finally going to be remastered came as a pleasant surprise, even more so due to the fact that it would include a previously unreleased outside of the Japan entry in the Chrono saga, Radical Dreamers. Now that Chrono Cross: The Radical Dreamers Edition is finally out, fans eager to replay the PlayStation classic and dabble in its newly translated pseudo prequel might find themselves slightly disappointed.

Chrono Cross: The Radical Dreamers is a remaster in the vein of Square Enix’s previous rework of Final Fantasy VIII, wherein they upped character model quality, applied an A.I-controlled filter over the pre-rendered background graphics, and added some much needed (but still totally optional) tweaks to gameplay. The end result is a game that still feels very much like a twenty year-old RPG, for better or for worse.

Without a doubt, Chrono Cross was one of the first PlayStation’s top RPGs. Coming in hot on the heels of other heavyweight Squaresoft games at the time, it had a tall order ahead of it, following up the success of the most beloved SNES game the company released. So when it proved to be a very different game than Chrono Trigger, shaking up the story in some very unique and untraditional ways, people freaked out.

Not to mention the fact that it was powered by a very complex combat system dealing with elemental colors, hit percentages and combos, Chrono Cross proved to be a genre-defining release, but not without a percentage of players feeling a little betrayed. I for one always had trouble getting into the combat back when the game was out originally, but now, having replayed a fair chunk of it, I grew to appreciate it more.

Not to touch on spoilers for an old game – if you’ve never played Chrono Cross and have yet to witness it, you definitely should – it’s safe to say that it definitely went in a different direction than what was expected from a sequel, even more so to a classic such as Chrono Trigger. And that’s even more the case thanks to the first official localization to Radical Dreamers ever, a game that up until now was locked behind a long dead Japan-only download service for the Super Famicom called Satellaview.

Radical Dreamers is basically a text adventure game set in the Chrono universe. It introduced players to characters like Chrono and Kid way before Chrono Cross came out, and had them invade Lynx’s mansion, just as the opening to that game showed. Unlike a traditional RPG, though, the fact that Radical Dreamers is pretty much devoid of actual graphics kept everything to the imagination of who was playing it. Outside of a few stills, nobody had any idea of what these characters looked like, and they definitely changed when Chrono Cross was finally released.

And differently from an RPG per se, there’s no real role-playing in this side story game. This re-release that includes Radical Dreamers serves more like a historical document than anything else, because honestly the game in and of itself is quite one-note. It’s amazing that so many years later we’re finally getting a translated version of it, sure, but in the end, it’s little more than convenient to have access to it than really play it. Its importance to the series as a whole is still very much there, but in all honesty, unless you’re completely enamored with the Chrono saga, you won’t spend a whole lot of time playing this thing.

Chrono Cross, on the other hand, is still worth playing for sure. Even though this remaster isn’t the best way of doing that, thanks to the loads of slowdown that it bafflingly suffers from on Switch and even on other much more powerful platforms like PlayStation 5. It’s already been analyzed to death by much more tech-savvy folks than me, and it’s been shown to run way worse than even the original release. So outside of having fast-forward, battle skips, and the obvious bump ups to character graphics, this is overall a worse performing version of Chrono Cross, sadly.

Then again, I don’t feel as strongly about the visual changes to this as some other fans of the original chunky game we played as teenagers on PS1. I like the painterly look that the backgrounds have now due to the smoothing filter that got applied to them. Due to how more cartoony Chrono Cross is when compared to other Squaresoft games from the time, especially FFVIII, which got a similar remaster a while back, everything visually seems to marry much better this time around, all colorful and saturated.

It’s not the best solution, mind, but considering that Square Enix must have lost the original files to this game like what happened with FFVIII’s, unless they spent a whole bunch of money redrawing everything, the solution that we’ve got here is the next best thing. And having these looks – even if you don’t like them –  means that there’s a way to get Chrono Cross running on modern systems legally, all the more merry.

That’s especially true after the worrying possibility of losing access to some of the other legal sources of playing it outside of owning an original PlayStation retail copy, something that along with fixing this remaster’s performance issues will be looked into. Hopefully these issues with PSN are just a bug in the end, but it shines light onto some worrying issues pertaining to an all digital future, something I’ll be discussing soon in an article of its own.

As it is now, Chrono Cross: Radical Dreamers Edition isn’t the ideal way of playing Chrono Cross, but it’s the best one we have. And with the aforementioned patch(es), it’ll be easy to recommend, even more so due it being the only official way to play Radical Dreamers, for as much of a letdown as it might end up being to fans who had yet to play it.