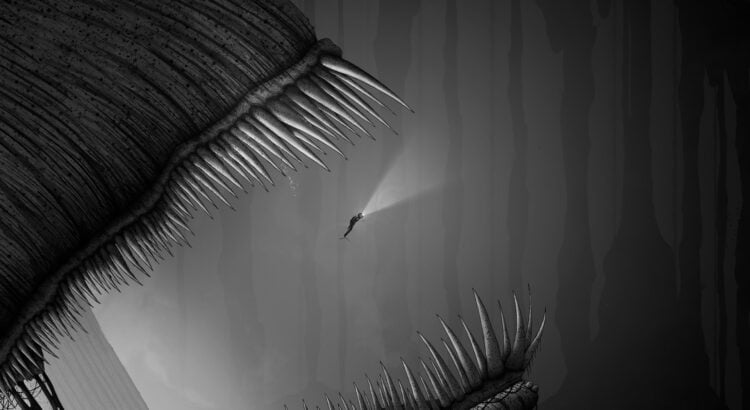 It has been said that we know less about the bottom of the sea than we do about the surface of the moon. The depths of the ocean are a vast unknown filled with little light, dark water and strange, otherworldly creatures which aren’t found anywhere else. Exploring this environment can only be done with extremely specialized submersibles, capable of withstanding the enormous pressure of being more than a mile beneath the surface. But what if you could explore them in a diving suit? Perhaps Silt gives us a glimpse. Silt is a brilliantly atmospheric adventure puzzle game from Spiral Circus Games which allows you to explore a fantastically realized underwater labyrinth, filled with both strange creatures and mysterious ruins.

Silt is most reminiscent of Playdead’s inaugural game Limbo, except set underwater. You play as an unnamed diver, who wakes up on the ocean floor with a weight tied to your foot. You can swim around the beautifully monochromatic world, encountering beautiful sea creatures and mysterious ancient ruins, solving a variety of puzzles along the way. Like Limbo, these puzzles are designed to temporarily halt your progress until you find the solution, and sometimes can have lethal consequences for failure. The diver has the ability to possess other animals including snapping fish and hammerhead sharks, which allow you to move around as the creature and use any special abilities they may have. The snapping fish, as their name suggests, can bite their way through ropes and chains, while the hammerheads can bash rocks to clear a path, or bring down other rocks. If you do die, either being eaten by a sea creature or via some other accident, you’re promptly respawned at the last loading screen, and as checkpointing is frequent, this never slows down your progress too much.

One interesting thing you can do is chain your possessions of other creatures together, jumping from fish to fish as you work to solve the latest challenge. This reminded me somewhat of how possession works in the Dishonored franchise, where you could inhabit rats, dogs and people. Sometimes you might need to do this because certain animals are smaller than others, allowing them to navigate through tighter passages. The puzzles are for the most part a good combination of reasonably challenging, not a cakewalk, but not requiring second perfect precision either. The ending levels of Limbo suffered somewhat from having a lot of timing-based puzzles, and although these exist in Silt they’re not as egregious. For example early on you have a “boss battle” with a large eel, who will leap out and swallow you whole if you’re not fast enough. Controls with the mouse and keyboard are surprisingly proficient, although much like Limbo and Inside, it certainly feels like it was designed to be played on a controller. For example, moving your “possession tentacle” in order to take control of other creatures feels a bit sluggish on a keyboard, but is a lot more precise with a thumbstick.

It cannot be understated that the game looks absolutely fantastic. For a game in purely black and white, it certainly outdoes the aesthetic of Limbo handily, with its complex winding underwater wildlife curling and bending across every scene and festooning the backgrounds, depth being added to environments with additional line drawings showing more plantlife in the foreground as well. In some ways it reminded me of the games of Animata Design, whose games such as Botanicula and Machinarium have a similarly detailed but painterly quality. The visuals, combined with the very solemn, ethereal soundtrack which accompanies you during your underwater adventure, create an extremely atmospheric experience, especially as the aesthetic of the environments can shift radically between levels.

Silt’s plot is delivered very similarly to that of the Playdead games, being entirely dialogue free. It’s certainly a game about the experience and emotions of what you’re seeing and hearing, as you swim your way across an alien underwater world, filled with beauty and nightmares galore. While there are elements of horror here it’s not as deliberately horrifying as Limbo with its grisly death animations, and is more interested in invoking a sense of wonder as you explore. For fans of the Playdead games Silt is an easy recommendation, but it’s also fully accessible for newcomers to this style of puzzle game.