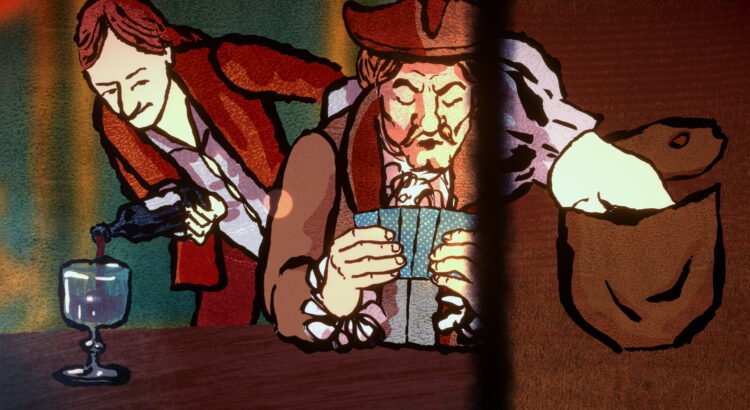 Card Shark is about outplaying and cheating the French nobility out of all of their money and uncovering a royal conspiracy along the way. It begins with the protagonist, a nameless (at first) worker at an inn who cannot speak, being given a proposition by one of the patrons named Comte de Saint-Germain. Specifically, if he’d like to help him cheat at a game of cards that night. Unfortunately, things go too well and the opponent lashes out and ends up killing someone by accident and places the blame squarely on your shoulders (he’s a cop so he can do that, you see), prompting you and Comte to go on the run.

From there, you’re taken on as a protégé and taught everything there is to cheating at cards. There is an ulterior motive at play, though: he also wants your help in uncovering a secret involving the king. Almost every game of cards you play then is a step toward learning more about it, the games merely being a front to collect information more so than just scamming the nobility out of their money (though that is equally important).

You start off with simple tricks like looking at the opponent’s hand while pouring them a drink and then signaling what their strongest suit is (a classic) via how you wipe the table. This technique is then altered based on the conditions of the game. If you’re playing too, you’re then catching glimpses of cards being dealt by your partner so you can tell him what the strongest card the opponent has with a mixture of subtle hand gestures to communicate the suit and strength. Eventually you start to use more advanced techniques such as marking cards based on their strength by bending them slightly or marking the back with paint to make them easier to spot while dealing, shuffling and cutting the deck in increasingly elaborate ways to ensure which cards will go to whom, or outright stealing cards for later via sleight of hand.

As you’re taught more tricks, you start having to perform multiple in quick succession, every step needing to be carefully executed swiftly to avoid rousing suspicion. It quickly becomes a lot to keep up with. Though the tricks themselves are often simple, the actual execution is what makes them challenging. Memorizing the cards you’re working with as well as those of your opponents on top of the specifics of the plan makes it easy to slip up. Countless times I made mistakes because, even after tons of practice, I was prone to forgetting at least one part of the plan. If I was looking at the opponent’s hand while pouring them some wine, the problem would be one of quickly trying to memorize what their strongest suite of cards was (hearts or spades?) or what signal I needed to use to convey the info (clockwise? Left and right?). I could pull it off consistently in rehearsal, but once the plan was actually in motion, I would frequently forget something or, worse, act too hastily and make the wrong move, costing me the round. Partially that’s just a result of the inherent challenge in trying to do two things at once, but mostly in my case it’s just the difficulty with doing those sorts of actions quickly under time pressure.

As the game goes on, your opponent’s suspicion slowly rises. Though it’s constantly rising, the pace is usually slow enough to give you plenty of time to execute each trick without issue. It’s usually during the more complex cheats that the ever increasing suspicion becomes more of a threat, as with more steps that require more specific actions comes the likelihood of making the wrong move. And the more you screw up or the longer you take, the less time you have before the ruse is up. Card Shark pushes you to be fast, then, as time is not a luxury.

Thankfully, Card Shark is merciful. If you, like me, are prone to forgetting something, you can turn on hints that can be activated whenever needed to remind you of key details – what sort of card did I need to signal and how many, which person am I trying to deal these weaker cards to, and so on. It has its limits – it wouldn’t tell me the exact signal I needed to use, only the info I needed to communicate – but it did wonders for reducing the frustration I would have encountered without them. The difficulty then was more of one of raw execution, which proved to be a regular challenge throughout.

Though none of the tricks are terribly complex in terms of raw inputs, the methodology can be a bit overwhelming. There were a couple of late-game tricks that gave me some trouble, even in the practice stages. It was one that involved shuffling cards from the top and bottom of the deck at the same time to get a card I needed from the bottom up to the top so it would be dealt earlier. The game’s explanation for it seemed straightforward enough when I read it, but it took me a while to actually perform it as what I was told to do and what I was getting weren’t lining up. The problem was partially one of me not running through it enough during rehearsal to make absolutely sure I understood the mechanics at play, but it was just as much an issue of just not quite understanding what I was being told to do no matter how many times I re-read it. I couldn’t tell you why I wasn’t getting it, but… I couldn’t. It was frustrating. I eventually just brute forced it and hoped it worked. (It did.)

Even in spite of that, though, it never stops being thrilling to succeed. The joy of pulling off such feats of deception and dexterity is immense. As the tricks become more involved and the pressure continues to mount, the simple satisfaction of pulling of each one without a hitch never ceases. The way a few simple inputs result in such complex motions contributes a lot to making the play feel as good as it does.

It’s easy to imagine another version of Card Shark where every trick becomes far more involved on the input side of things to try creating a more one-to-one imitation of the movements, thereby making every step a more delicate process. And that version might be good too, but that they can feel satisfying to pull off with such simple inputs while still seeming complex is a definite achievement; not only for the way it makes them more easily accessible but the ways it still feels like you’re shuffling the deck or pulling sleight of hand maneuvers.