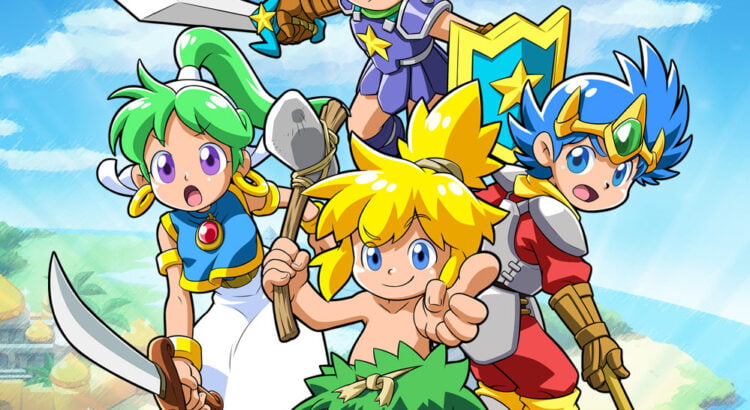 In my last review, I talked about how tricky it is to talk about game compilations. That’s especially the case when a particular franchise is as old as Pac-Man’s and not all releases over the years are exactly bangers. The same can be said about Wonder Boy to an extent, although the games included in the Wonder Boy Collection aren’t exactly bad – they just haven’t aged too well and will only probably appeal to those who have a story with them already.

There are four games included in the Wonder Boy Collection and they’re definitely the most representative of the series. Two of them are arcade ports – the very first Wonder Boy and its sequel, Wonder Boy in Monster Land –  while the others are Genesis/Mega Drive versions that have previously gotten ports. The most recent of them, Monster World IV was even remade from the ground up, with mixed results, which is paired with Monster Boy in Monster World.

You might already be getting confused with the naming conventions in this franchise and I certainly don’t blame you. Along the way, the games split off into distinct series that even spawned others along the way, like Hudson’s own Adventure Island. Safe to say, whenever you see a little dude or lady holding a sword and running a little funny, you’re probably playing one of the games in this hydra of a franchise.

And if you’ve grown up outside of the U.S, you’ve probably even gotten an entirely different flavor of Wonder Boy/Monster World. Monica’s Gang, a popular Brazilian comic strip spawned a reskin of a couple different entries in the series that went on to sell many, many copies under the banner of local manufacturer and Sega products distributor Tec Toy during the 1990s and early 2000s.

That’s not even mentioning the absolutely gorgeous reimagining of Wonder Boy in the form of Wonder Boy: The Dragon’s Trap, which took the aged and admittedly archaic gameplay of the earlier games in the series, keeping their personality and colorfulness intact. That’s to say that for anyone looking for tight playing games to be included in this compilation, they’ll be somewhat disappointing, as 3/4s of the games in Wonder Boy Collection are slow and plodding affairs.

Even for historical purposes, same as Pac-Man Museum+, there’s not much to go on about Wonder Boy Collection. There’s only a single page of concept art images for all four games and that’s about it. When it comes to emulation, it includes the bare minimum to be expected from a group of old games such as these – basically save states, a couple of different graphical filters, the option to zoom in and keep the original aspect ratio and that’s about it.

Not to completely disparage Wonder Boy Collection, it’s really the first time the arcade versions of the original entries in the franchise are available to play outside of actual hardware or less legitimate means, so it’s got that going for it in a way. Then again, these aren’t the best versions of these games as even the Master System managed to offer much better controls than what’s on offer here.

With that in mind, it’s a little difficult to recommend Wonder Boy Collection to anyone other than those who’ve grown up playing these games and have enough nostalgia to play through them again on never systems. It’s hard to imagine a newer audience getting any play out of these – well, maybe Monster World IV since it’s easily the best playing out of these, and even that one is already available elsewhere on its own – when there are already much superior reworks of them like Dragon’s Trap to begin with and at a probably much lower price point.