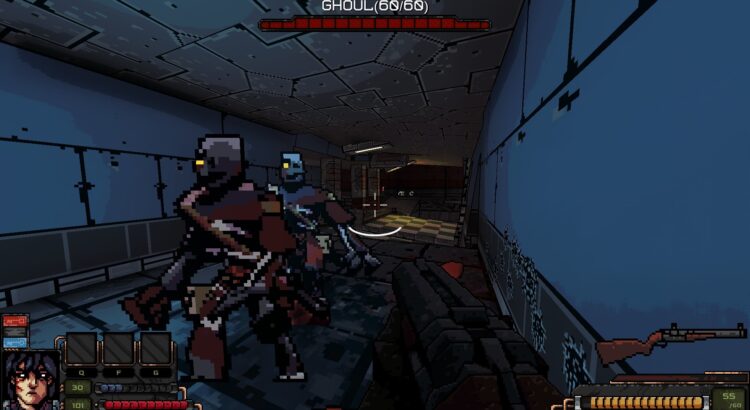 Since the original Project Warlock was released in 2018, the flow of retro-style first person shooters on the PC has escalated from a trickle to a torrent. The market is now flooded with games jostling for the attention – and money – of the “boomer shooter” crowd. With Project Warlock II, developers Buckshot Software are aiming to up their game in order to compete in this increasingly crowded environment. Its early access release includes a handful of levels and weapons, and one of the three planned playable characters.

The natural templates for the present wave of ‘90s-inspired shooters are Doom and Quake but Project Warlock felt a little different. Its 90-degree angles and relative lack of verticality brought to mind Wolfenstein 3D, the even older genre milestone made by id Software. While these features had a charm of their own, they felt particularly old-fashioned. This in-progress sequel goes for a more modern approach, in this and other areas.

Notably, Project Warlock II so far consists of just six levels. Each of these is vastly larger than was typical for the original game. The level design is also more ambitious by an order of magnitude. The geometry is far more varied, the spaces include more verticality, and reaching the exit is a much less linear affair. Those who valued the original for its bitesize subdivisions may find this sequel quite exhausting – playing a game with a pace this relentless for 40 minutes without a break can sometimes feel like an ordeal.

Buckshot have made a number of changes which emphasise this rapid-fire tempo. All magic abilities are now on a cooldown. Destroyed enemies can be made to drop pickups which shorten the interval between uses of the formidable new spells. Like more lavish recent shooters like Doom Eternal and Shadow Warrior 3, fast and frequent weapon switching is also strongly encouraged. The binary choices for weapon upgrades return, offering two satisfying alternate paths to take each boomstick.

The sizable maps reward exploration with the expected supply of secret areas. Project Warlock II never prioritises exploration over gunplay, however. Combat here feels frenetic and skilful; as is typical of retro shooters the enemies aren’t clever, but they are always numerous. Monster counts for a level are always in the hundreds, and the higher-tier foes and bosses pack a real punch. In an eyebrow-raising move, Buckshot has lifted the shambler straight from Quake, even pilfering its name and method of attack.

As satisfying as it can be, Project Warlock II may struggle to stand out from the pack. Plot is rarely considered a high priority in these games, but at no point does Buckshot expect players to care who they are, where they are, or what they’re trying to achieve. The level design is greatly improved over the original, but it is difficult to bring any specific area or encounter to mind just a few minutes after tackling a level. There are also the technical hitches to be expected of an early access project. Hit detection can be unreliable, enemies can occasionally fire at the player through walls or ceilings, and ammo balance could use another look.

Especially in a crowded field, Project Warlock II is a little difficult to recommend as things stand. Buckshot Software have plenty of time on their hands, though, and the forthcoming playable characters may lift the experience considerably. While hardly essential right now, this sequel is certainly worth keeping an eye on.