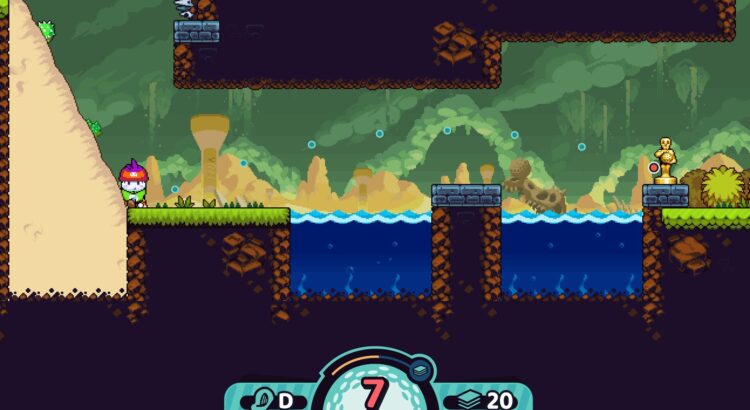 With Cursed to Golf, developers Chuhai Labs and publishers Thunderful lean into the obviously demonic nature of the sport. Players take on the role of a competitor about to win a major tournament when they are struck down by a bolt of lightning. Condemned to “golf purgatory”, a kind of self-rearranging netherworld, the would-be champ is forced to struggle through 18 holes in order to return to the sunlit uplands of the living.

Cursed to Golf is a 2D, pixel art roguelike with a supernatural golf theme. It promises elaborate trick shots, devilish underworld challenges, and the chance to deploy curious special abilities. On paper, it’s a great idea and potentially a strong addition to the growing corpus of light-hearted indie golf games. Unfortunately, the core gameplay is too awkward and frustrating to justify tackling the same holes repeatedly in order to see the ending.

The 18 holes that are played in any one full round are drawn from a selection of dozens that Chuhai’s greenskeepers have devised. For each hole, our plucky competitor begins with a set number of shots. Completing a level means getting the ball to the flag before they run out of shots; failure to do this will end a run. Additional shots are earned by smashing special idols dotted around the course, or by using purchasable ace cards.

The game makes a good first impression. The tutorial, set in the land of the living, deftly introduces the three club types – driver, iron, and wedge – and their uses. The pixel art is crunchy and attractive, and the retro soundtrack is excellent. The first couple of holes are challenging but manageable, built on a reasonable scale. The player’s guide to these early stages is an amiable, giant Scotsman – an inviting presence albeit sadly unvoiced.

Things soon begin to go awry, though. The biggest issue in Cursed to Golf is that, put simply, it’s hard to see anything. The camera is close enough to the action that many shots, especially with the driver, are almost blind swings out into the invisible area off the side of the screen. Sure, there’s a special free-roaming camera to help assess the lay of the land, but this isn’t viewable while taking a shot.

You might expect that a breezy, 2D golf game might make liberal use of fun mini golf hazards like rotating windmills, slopes and tunnels. Unfortunately, Cursed to Golf is instead dominated by cruel and frustrating hazards like obnoxiously positioned pools of water, sand traps, deadly spikes, and stacks of TNT. These feel increasingly unfair as the game goes on, and feel like a chore to navigate. Boss “battles” at the end of the game’s phases amplify this feeling. The bosses, the first of which is the Scotsman, seldom make mistakes and have a swing that is far more powerful than that of the player. These stages are long and gruelling, and seem all the more so because the player is in control only half of the time. Worse, many of the ace cards feel useful only in very specific conditions, if at all.

Cursed to Golf has such good aesthetics, and is based on such a fundamentally sound idea, that all of this could be forgivable – and some, no doubt, will relish the challenge. The roguelike structure, though, means that these frustrations have to be endured over and over again. Unlike, say, Nuclear Throne or Into the Breach, the game lacks the smooth and addictive core gameplay to make that feel worthwhile. It’s for that reason that despite taking a strong first shot, Cursed to Golf ultimately ends up feeling under par.

One thought to “Review: The fairway is less than fair in Cursed to Golf”