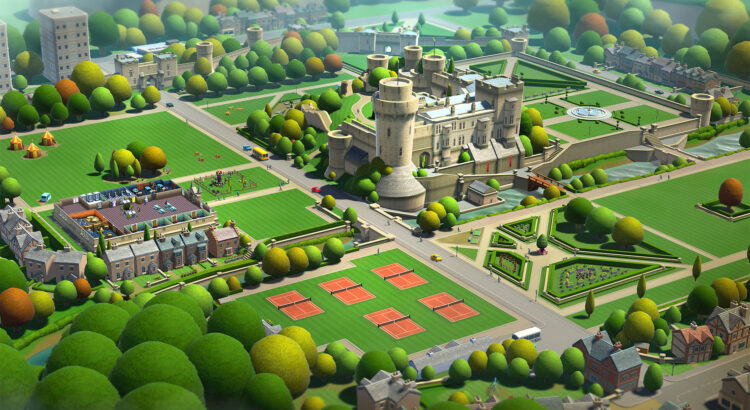 Since Two Point Hospital (a spiritual successor to Theme Hospital from some of the original Bullfrog developers) launched in 2018, it has received a wide array of DLC, as well as broad critical acclaim. Although it didn’t really alter the Theme Hospital recipe that much, it successfully iterated on it, adding plenty of new humour, charm and quality-of-life improvements to proceedings. From here, a sequel about managing universities seemed like an obvious next step. Enter Two Point Campus, where you do just that. Two Point Campus is a nicely satisfying, funny management game, and a gentle evolution on its predecessor.

The fundamentals of Two Point Hospital and Theme Hospital remain present in Two Point Campus, despite the change of venue. It’s your role as a jobbing university administrator (or Vice-Chancellor) to run various universities and colleges, building lecture theatres and dormitories, hiring teachers and janitors, scheduling classes and hopefully having your students pass, all while making a healthy profit of course. Given the massive proliferation of profit-making in the higher education sector in the last 30 years, a game like Two Point Campus now makes complete sense whereas back in the 1990s, for-profit universities were a relative rarity within the UK, although much more common in the US.

Every year in Two Point Campus is aligned to the academic cycle. At the beginning of the year, you need to pick which subjects you want to offer to students, set the intake and the applicable tuition fees, and of course make sure you have the correct staff and facilities to be able to teach the course. The topics of study are appropriately zany, such as Scientography, which seems to be a mad scientist’s idea of learning, or even wilder things such as Wizardry, which is everything the name implies.

You both want to create a useful learning environment for students with things like libraries and tuition rooms, but also craft a fulfilling social life as well, with facilities such as student unions, coffee shops and student lounges. Things such as bars and eateries provide an extra way of making a little bit more cash, since students are not lucky enough to get their meals included.

Likewise, you need to construct dormitories for them to sleep in, shower rooms for hygiene, etc. All of this is straightforward to do thanks to the intuitive room creation tool, and with the ability to copy-paste rooms and save favourites, it means you don’t have to recreate every single room from scratch.

Another neat aspect of the game is keeping your students happy, alongside their academic performance. Besides the aforementioned lounges and dining facilities, you can also create student clubs which will grant members benefits for joining, such as the Powerwalking Club, which enables members to walk faster between classes.

Socializing itself is encouraged, with students idly chatting while eating meals or sitting on park benches, sometimes feeling like it overlaps into The Sims territory somewhat. Another nice addition is that the game comes with a sandbox mode out of the box, allowing you to craft the university of your dreams on a themed lot. This was added post launch to Two Point Hospital, and was something I’ve wanted since the days of Theme Hospital so it’s great to see it also added here.

The goofy radio stations and the same crusty DJs return from Two Point Hospital, as does the PA announcer who has now moved on to insulting students over the tannoy rather than patients. The sense of humour is gentle and goofy, and all of the in-game voiceover is great. The music is moderately decent but I still feel the music of both this game and Two Point Hospital was a little lacklustre compared to the original MIDI music of Theme Hospital, or the orchestral soundtrack of The Movies (which several of the developers at Two Point previously worked on). At this point the game doesn’t support the ability to import custom soundtracks, but since that was added to Two Point Hospital it seems fairly likely it will be added here as well.

Two Point Campus builds upon the good work of Two Point Hospital in numerous small but valuable ways. Calling this simply a reskin is a tad oversimplifying given the ways in which the core gameplay has been altered since its predecessor, moving from the idea of curing patients being the core metric to instead a combination of student academic excellence and personal satisfaction.

It’s a shame that the game didn’t take the opportunity to be a bit more bitingly satirical with its jabs against for-profit higher education, but there is certainly more than an element of truth to the PA announcement saying; “university gives you a bright future, and clouds it with debt.” Two Point Campus certainly scratches the itch for more management game zen, and does it with panache.