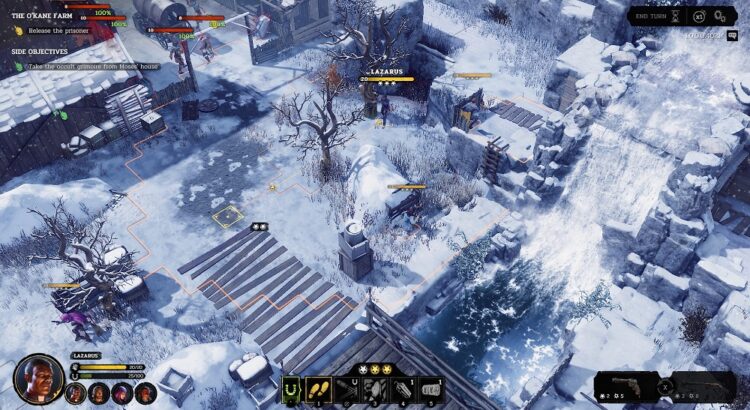 The year of the weird West continues. Following on from the underwhelming Weird West and beating Evil West and Blood West to the draw, comes single-player turn-based tactics sequel Hard West 2. Happily, this particular gun-slinging saga stakes a convincing claim, and is one of the best Western-themed games to ride into town since the terrific Desperados III two years ago.There are some rough edges, and newcomers to the genre should think twice, but Ice Code Games have largely hit their mark.

The new team has taken over the series from another Polish outfit, CreativeForge Games, who made the original Hard West. Only gameplay and theme connect the two entries; Hard West 2 features a wholly new story. This time, laconic gunslinger Gin Carter leads a posse of six in pursuit of the demonic Mammon and his evil, spider-legged ghost train which is rampaging across the West. The story and characters are rarely of more than moderate interest, although the voice acting is strong. Kevin Conroy’s performance as surly undead outlaw Old Man Bill is the highlight.

Most turn-based tactics games require some secondary mode to fit between the battles. In Hard West II, that mode plays out on an overworld map on which Carter’s posse rides between towns and other points of interest. There are text-based conversations, basic fetch quests, and stores stocked with new gear but it never rises above the level of filler. This mode is a bit better than the drab A/B decisions of Warhammer 40,000: Mechanicus, but nowhere near as good as the strategic layer of XCOM 2. It’s merely something to click through for a few minutes before the next shoot-out begins.

The turn-based battles are the game’s main course, and Ice Code has a fine recipe. Each fight involves four of the possible six posse members, and tends to consist of three escalating encounters with enemy mobs. Genre veterans will be quite comfortable with most of the mechanics after just a couple of scraps – Hard West 2 never strays too far from the much-emulated XCOM formula, but the deviations are significant and interesting.

The posse is relatively weak defensively because there is no overwatch mechanic and not all characters can hunker down to help avoid damage. To compensate, many weapons are capable of trick shots, which can ricochet off certain metal objects in the environments to hit enemies behind cover. More crucially, any character that kills a foe during their turn will have all three of their action points instantly refunded – an effect called “bravado”. This idea is essentially a powered-up version of the action refunds while gunning down Lost in XCOM 2: War of the Chosen.

Exploiting bravado ruthlessly and to the fullest is completely mandatory. Enemy numbers are very high, and if not cut swiftly they will overwhelm the posse in just a few rounds. The lovably unhinged Native American warrior Laughing Deer is typically the best at racking up chains of kills, due to his high speed and the fact that melee attacks cost just one AP. While each character only has one or two distinct abilities, they all offer intriguing tactical possibilities: from Flynn’s “shadow swap” to Old Man Bill’s habit of expelling bullets out of his own lead-ridden body and into any bandido in range.

Enemies have numerous tricks of their own. Some bandit gunslingers can pull off trick shots; witches summon multiple new foes per turn; blackhearts can syphon huge amounts of health out of posse members; and most undead enemies regenerate their health fully if not killed inside one round. As a result of this, Hard West 2 is difficult – arguably, too difficult at times. On the default setting (which, tellingly, is called “hard”), even tactics veterans will find themselves reloading or repeating missions multiple times.

Sometimes the posse is simply not set up correctly to complete a particular mission. That requires another reload to an earlier point, a rearrangement of characters and gear, and then going back in again. This becomes increasingly frustrating as time goes on and greatly slows down progression through the campaign. Extra annoyance is added on when enemies occasionally make apparently impossible shots, or when strict and arbitrary time limits are imposed for no good reason.

Battles often resemble puzzles, because taking actions in a highly optimised sequence is often a requirement for survival. Despite the potential frustrations, these encounters are always satisfying. The locations are varied and detailed, and include a snow-smothered ranch, a lavish Utah bank, a moving train, and even otherworldly dreamscapes. Finding ways to optimise the posse’s abilities by shifting around the magical playing cards that serve as mission rewards is an intriguing problem. At some point in every mission, things will click and the player can expertly guide the posse to strike down a half dozen zombie varmints in style, and without taking a scratch.

Today, XCOM 2 is still the gold standard for turn-based tactics and Desperados III is arguably the ultimate Western tactical experience. With Hard West 2, though, Ice Code Games have captured some of the greatness of these landmark releases. The fiction could be more compelling, and the challenge a little less unfair, but this is a trove of head-scratching shootouts that is easy to recommend to tactics fans.