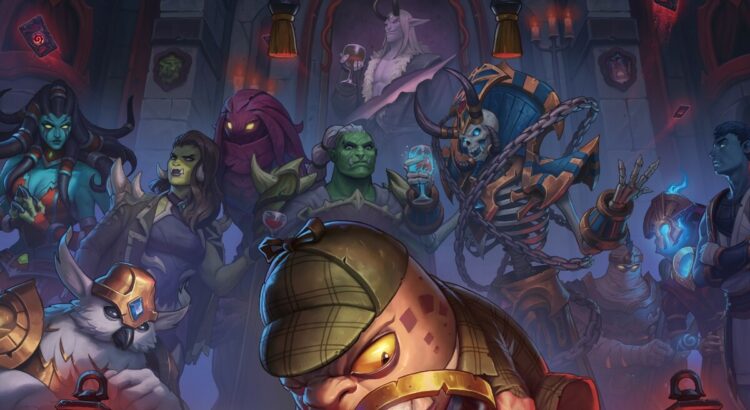 Gareth: I played Hearthstone pretty religiously between 2015 and 2017, but completely fell off it during the intervening years. Picking back up in 2022, it’s a steep learning curve. So many aspects of the game have fundamentally changed; the way the Standard mode works, the introduction of Classic mode, the revised ranked ladder, the plethora of card expansions I’ve missed in the intervening years, the new single-player content they added, even the addition of the Demon Hunter class to the original nine classes (with its principle “hero” Illidan Stormrage). There’s also the brand new modes such as Mercenaries mode and Battlefields, the latter of which I’ve barely touched.

The newest expansion, Murder at Castle Nathria, is Hearthstone’s 21st card expansion since launch, and also its joint largest with 270 new cards (135 collectible), alongside 2020’s Scholomance Academy. The focus of the expansion is a new card keyword (think special ability) called Infuse; cards with this ability will be buffed-up with additional power, if they are played after a particular number of friendly minions has died while the card is in your hand (being in your deck does not count). This is an interesting risk-reward ability because you must judge whether you should play the weaker card when not Infused, or wait until enough minions have died to power it up. There is also the new neutral Legendary card which has been granted to all players, Prince Renethal, which grants players 10 additional health and 10 additional card slots in their deck (increasing both to 40, the standard number being 30). A larger deck and more health can be both a positive and a negative, depending on whether you want to quickly end the game or not.

Hearthstone’s biggest issue has always been “RNG”, a shorthand way of saying random chance. Although ostensibly a skill-based card game, Hearthstone is overly reliant on randomness in terms of how games are played, and the latest expansion absolutely continues to double-down on this. Lots of cards have the Discover ability, which gives you a choice of three random cards for you to choose one to add to your hand. Depending on the card in question this can include spells or minions, including ones not in your collection. These can dramatically swing the battle based on essentially a coin toss, and while it’s fun that sometimes sheer luck can turn an awful defeat into a magnificent victory, almost every game of Hearthstone will be played in this manner. Once I know a game is essentially unwinnable I try to resign as swiftly as possible, and sometimes this can happen as early as turn three or four, if the opponent has perfect cards and I have nothing. One improvement from the earlier days of the game, however, is that the speed at which games are played and completed has generally slowed down; very few players obsessively hit the opponents face while ignoring minions these days, whereas back in the early days, almost every person playing Hunter did.

There is also the sheer cost involved for brand new or returning players. While the game does have good onboarding options including special quests and a season reward tree which grants additional gold, the new expansion costs $49.99 for the standard pack (60 packs) and $79.99 for the mega pack (80 packs plus 5 golden packs). As before you can buy individual packs for 100 gold, but acquiring a full deck via this method would involve considerable and lengthy grinding, as well as the chance of acquiring duplicates.

Is Hearthstone still fun? In small doses, I cannot deny I still enjoy it, particularly all of the new single-player content I missed. The ladder though is now a daunting challenge even at the lowest skill level, as you will be regularly matched-up against Hearthstone veterans given the considerably smaller player base of the game, some of whom will no doubt have been playing consistently for eight years. Many of the new cards are fun to play, and artistically the game still has a very charming aesthetic with plenty of personality in the cards, their voices and animations. But for a brand new player looking at starting Hearthstone from the ground floor, it may be a rather daunting prospect.

Eduardo: Yeah, you make very valid points, Gareth. I’ve been playing the game consistently since first getting my hands on it after the beta period pre-launch, but in a very casual way. What I usually do is try to at least get the five monthly wins in order to score the card back, without investing much in the way of actual cash in the game. The only real money I spent on it was with One Night at Karazhan single player content that was added into Hearthstone back in 2016 – jeez, it’s been that long already?! – because it’s one of my absolute favorite raids in World of Warcraft from the time I used to actively play it.

Otherwise, playing Hearthstone has been a very laid back affair for me, with very, very rare occasions which I tried to be more competitive but ended up failing miserably, for the exact reason that you stated so eloquently: the game is just not built for a competitive experience if you wish to keep away from microtransactions. And honestly, I wouldn’t even call them all that micro. Lots of its content costs as much as fully priced games, and if you add in the continuous cost of buying card packs hoping you’ll get a lucky drop, that can escalate even more. And I get why Blizzard implemented this formula, it just works. It keeps a captive and extremely faithful, although diminishing audience around, basically in a bubble. It’s as predatory of a model as it possibly can be without offering the actual cards people need for sale at an even higher price – oh,let’s keep this one to ourselves, don’t want to give Activision any ideas, right?

My degree of skill playing the game is basically summed up by the number of classes I’ve managed to attain 500 wins with: one. I hit gold with my Hunter just recently this year, if you can believe it. Outside of that class, I dabble with the Shaman, who’s sitting at around 300 wins, and the rest are just there to look pretty. I honestly can’t see myself trying to work on any others due to sheer commitment that Hearthstone demands, not only in regards to time but financially. If we were talking about WoW, sure, I would be happy to level more characters as I have done so in the string of years I spent in Azeroth, but not in a game that is more focused on my investment as this one.

Then again, I wouldn’t dare say that Hearthstone hasn’t been a fun distraction over all these years. I just had to find a balance when playing it that I’ve been sticking with for a long time up to this point. It’s the reason that this card game has been the only Blizzard product I’ve consistently played without much of a break, and heck, I played and got really hooked into pretty much all of them. I even talked about the issues that eventually lead to me dropping Overwatch altogether, and those overlap with the lingering annoyances we both have with Hearthstone. The RNG model works in those games’ disadvantages to different degrees, and in Hearthstone’s case, it’s one that is intrinsically tied to its gameplay, so there’s no escaping it, unlike what Blizzard is doing for Overwatch 2 apparently.