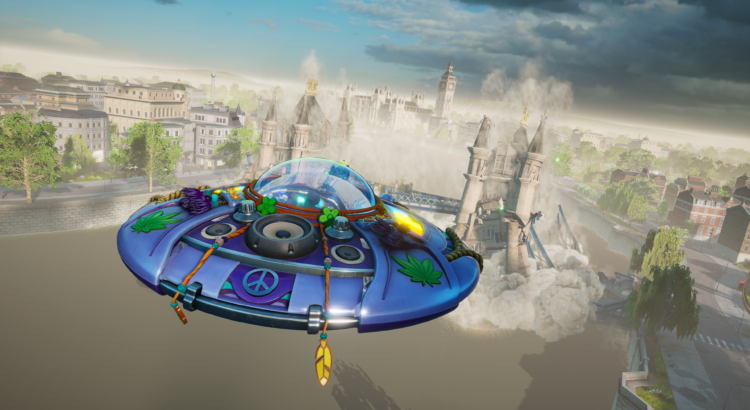 Back in 2020 I got to review the remake to the first Destroy All Humans!, one of my favorite PlayStation 2/original Xbox era open-world rumps. It was an incredibly faithful recreation of the original entry in the franchise, and although it added a handful of modern touches to the gameplay in order to bring it up to today’s standards, developer Black Forest Games did little to change the core gameplay, for better or worse.

Destroy All Humans! 2 Reprobed follows the same path, with absolutely nothing changed from 2006’s entry into the series, aside from the prettied-up graphics, rearranged music and the gameplay additions that carry over from the original game’s remake. This time, Crypto 138, who took over the White House at the end of the original, is destroying all humans in the 1960s.

It all starts after the Soviet Union takes down the Furon mothership in Earth’s orbit with a nuclear missile, scattering valuable pieces of alien technology all over the planet. Getting all of that back, as well as figuring out what the KGB is planning takes Crypto not only to the U.S, but also to the U.K, Japan, Russia, and even spaaaace.

Oh, and this version of our Clint Eastwood sound-alike take-no-prisoners big-headed protagonist also happens to be the only one of his kind to have a genitalia, referred to as “The Package” – get it?! – turning him into a very horny extraterrestrial in the process. So you can guess where the humor level is this time around. While Destroy All Humans! leaned more heavily in poking at Americana and the Red Panic during the late 1950s in a more naive fashion, Destroy All Humans! 2 Reprobed goes all out into sexual innuendos, to an embarassing degree. If this game was already stuck in fifth grade back in 2006, it’d probably be the king of detention today.

And the developers and publisher acknowledge that. As soon as you boot the game up and start a new save, you get a content warning letting you know that the content remains unchanged from the original version of Destroy All Humans! 2 and what tried to fly 16 years ago simply won’t today. This game tries way too hard to be clever and witty and fails miserably. Constantly.

That’s not to say that Destroy All Humans 2! Reprobed isn’t any good. You should just control your expectations coming into this one. Know that, yeah, you’re able to dart around in a UFO blowing the ever living crap out of everything in your way, and that there are neat telekinesis powers to put to use when causing chaos on foot, you just get to do all of those things while having to endure a nearly wave after wave of awful attempts at humor.

The mission to mission progression can be a little jarring at first if you haven’t played the previous game as it simply slows things down and fades to black as soon as you finish the last objective, only to drop you somewhere completely different in the map immediately afterwards. You then get to follow the map marker to the next objective, and so it goes until you get to move to a new location as the story unfolds.

Exploring and just poking around the world can be slightly amusing, as there are a number of optional side jobs to complete, along with new saucer landing spots to unlock. The latter are tied to a new character called Arkvoodle, the Lord of the Sacred Crotch – yup! – who has a variety of tasks for you to do before letting you park your ride over his giant stone face.

The main problem with the open-world in Destroy All Humans 2! Reprobed is the same one that games of the genre had in the early 2000s: it just feels empty. The game lacks the density in people that makes a city actually feel populated, and even though Black Forest Games did a tremendous job making Reprobed look great, they could’ve tried to make things more lively with, well, more living beings. And while there, they could give them more to do than simply standing around the world.

The stealth mechanic that has you stealing the looks of specific humans in order to infiltrate secure locations as an alien is back in this game, but there seems to be something broken in the programming. It’s way too easy to unintentionally cheese the system and just steal anyone’s body while everyone is there ignoring you. This wasn’t an issue with the first remake of Destroy All Humans!, so hopefully it will be fixed in a coming patch.

Thanks to that, new abilities like the one that brainwashes people into dancing, which were supposed to provide otherwise hilarious in-game moments giving you a chance to escape high alert situations is barely needed. It’s a shame, since it’s an extremely silly and fun mechanic that might grow old quickly, can help provide a chuckle or two, way more than the actual written jokes within the game, when you have all manner of people just throwing it down all around Crypto.

It goes without saying that the voice acting for Crypto and his boss, Orthopox 13, continues to be great despite the forced overtly charged puns in the script. Black Forest Games nailed the vibe of the time when it comes to the color pallete within Destroy All Humans! 2 Reprobed as it’s one of the most visually saturated games in quite a while. Same goes for the soundtrack, which unsurprisingly borrows a lot from the time period not only in terms of rock ‘n roll, with riffs going off with every mission transition, but with movie tracks, especially spy caper ones.

While I wouldn’t exactly call Destroy All Humans! 2 Reprobed awful per se, it goes to show that being too faithful when remaking a game can be quite harmful to the end product. The way over the top humor and juvenile tone, along with the potentially boring and definitely dated mechanics make Destroy All Humans! 2 Reprobed feel like a relic of the past and hard to recommend. For those who enjoyed its original run years ago when they were most likely impressionable teens, it might end up being more of an embarrassing memory than a nostalgic trip down memory lane.