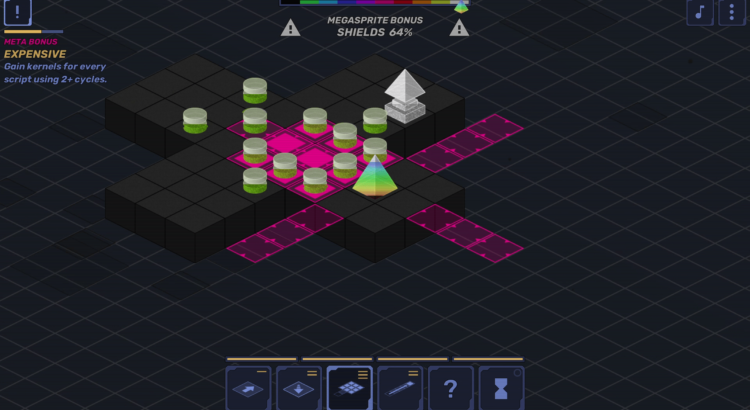 Roguelikes are, by design, the kind of games that require you to avoid attachment. Anything you gain in any one run is only going to be around for that singular playthrough, likely never again to be seen on either success or failure. It’s what makes the genre work because every time you play the variables are certain to differ greatly. Blacken Slash instead asks, what if that didn’t have to be the case? What if that beloved piece of gear that’s served you well doesn’t have to vanish and instead can carry over as many times as you’re able to hold onto it?

Blacken Slash is a tactical role-playing game/roguelike that’s based around this very premise. It’s a run-based game where you take on a 50-level gauntlet to try and stop an evil program that’s slowly taking over the system. Every level is designed like a puzzle. You’re dropped into a stage with an objective – defeat all foes, reach the exit within a set number of turns, or survive – and have to figure out how to do so while taking as little damage as possible. Fail and you have to start all over again.

You start with three action points and a very basic attack that only hits what’s next to you. For the first few levels, it’s very straightforward. Enemies are few and easy to fell. New equipment comes in at a steady pace but not so fast as to overwhelm. It eases you into the basics and slowly introduces its mechanics, something new being added every few levels. First a shop to spend “kernals” (money) to refill your health, buy a random assortment of gear, or archive keys. Then the ability to re-roll the bonuses each piece of gear you find has, and finally the ability to upgrade said bonuses. Standard stuff. What’s notable is the archive.

The archive makes everything you obtain potentially vital. As long as you have keys available, obtained either by buying them in the store or from bonuses you can take every so many levels, every piece of equipment can be stored for later so you can take it with you at the start of your next run. This makes builds less something you assemble on the fly and unique to every playthrough, but rather something to steadily work toward over time. Cash carries over as well instead of merely saving a percentage or disappearing entirely. This is important because all the upgrades you invest in still apply when you put them in the archive. You can spend your cash at the end of a run to boost or re-roll your equipment’s attributes to make it stronger before you put it away for later, or spend that money on keys to ensure you have enough to save everything you want to. So if you have a stockpile of really strong gear that you’ve been slowly enhancing or reshaping over multiple runs, you can effectively start with what would otherwise be an endgame build in most other roguelikes. It’s a cool idea that gives Blacken Slash a great hook.

Most roguelikes approach progression as a separate system that slowly unlocks various boons that give you an edge on future runs. Any currency or resource you collect to obtain those is carried over on death so that you have something to show for your efforts and is spent during downtime between each attempt (such as in Hades). Those unlocks then slowly make it possible to get farther and farther until you eventually win. It’s the cornerstone of the roguelite sub-genre. Blacken Slash is no different, really, but the specifics of how it achieves the same ends is what makes it unique. Instead of a series of set upgrades that build over time – say, a set percentage of shields you just have from now on, a better starting weapon, or a way to cheat death at least once per run – your basic stats and equipment remain the same. The only progression that happens is the game unlocking its systems in full and whatever you decide to add to your archive to draw from.

It forces a long-term approach to succeed. On my best run so far, I was using a teleport ability, a shield that lasted one turn, and a ranged attack that hit a 3×3 grid starting a couple spaces ahead of me. It wasn’t the strongest load out from a raw numbers standpoint, but it worked well. It was basically the classic all-rounder build: solid attacks to deal damage up close and from afar, the ability to tank hits as needed, and a way to back off and make my foes waste their turn getting into position so I could avoid taking damage. It took me all the way to the final level before I finally met my match due to not having the damage output I needed. I lost, but I got some strong gear I was able to save that I can bring back out once I have an idea of how best to make the most of it and secure a victory.

Before this, I was playing Blacken Slash without taking the larger strategic elements brought on by the archive into consideration. I was merely treating each run as I would any other roguelike: taking things on as they came and making the most of whatever I had available at the time. I would often end up focusing on raw offense above all else, trying to vanquish foes quickly before they could strike. If I had to mitigate damage, what better way than to strike first and avoid letting them touch me altogether? It worked well enough most of the time, but that approach had clear flaws. Namely that as I got farther, the evasion rate on enemies would rise and leave me vulnerable if I wasn’t lucky enough to land every hit.

I would find abilities that let me restore health, generate shields, and teleport around the stage, but they’re utility wasn’t always immediately useful. I usually had enough kernals to spend on healing between levels when needed and the action point cost on shields or teleports often didn’t help if it meant I was gambling on offense or defense every turn. The classic “well, this doesn’t help me immediately, so might well not bother” problem I so often deal with in these sorts of games.

Taking the long view instead has made everything click into place. If I can’t put together a winning build, I can at least gather new gear I can use later or take something out of the archive to further strengthen it before putting it away again until I’ve got what I need to do The Run and finally get a victory. Every new attempt is merely prep work that’s slowly paying off instead of a series of failures with little to show for my efforts.

If there’s one flaw, it’s that the scenarios quickly repeat across Blacken Slash‘s 50 levels. While the difficulty is always increasing as stronger enemy types are introduced and the likelihood of shields and high evasion rates occur, and of course the numerous ways your current build can affect how any turn plays out, the actual scenarios don’t change much. The positions of enemies and pickups, the goals you need to accomplish, the layout of the levels: all of it becomes familiar very quickly. Granted, this game is made by a single person and the levels have a clear amount of bespoke qualities to them that it’s an unavoidable and understandable consequence of the game’s design. It’s mainly an issue in the first several levels than it is, say, 20 or 30 levels in, as the very first levels are the ones that tend to be the exact same more than the rest.

That aside, once a run gets underway and everything starts to click, it’s a good time. Being able to construct a build fully formed before you make another attempt at the 50 level gauntlet that Blacken Slash presents is a great hook that the game delivers on splendidly. I’m probably a long way out from actually getting a win still, but at least I’m always getting somewhere in the meantime.