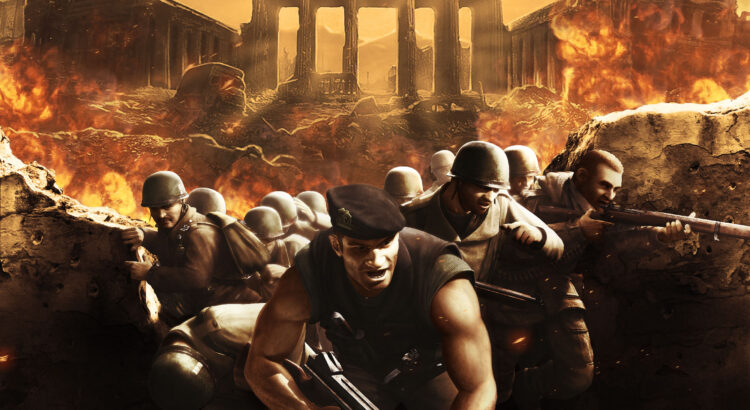 Easily one of my favorite videogame franchises of my teens, the Commandos games provided me with countless hours of relentless save-scumming fun back in the late 1990s and early 2000s. Among them, I would count Commandos 2: Men of Courage as my favorite. It felt like a perfect mix of complexity in the micromanagement of my merry band of Dirty Dozen-inspired World War 2 soldiers, and the game’s overall level of difficulty. It was certainly no easy time, but it was a blast nonetheless to slowly get through mission after mission over the course of days, back when I had a whole lot more free time to dedicate to a single game and really pull it apart.

And it was great to see it re-released by Kalypso Media a couple of years ago. The port was slightly rough in its delivery, especially for newcomers, but it made the game playable on modern systems and gave it a chance to shine once again, warts and all. It’s now Commandos 3: Destination Berlin’s turn, and to all accounts, it’s in a similar, perhaps more troubled state, than its predecessor’s HD remaster.

Commandos 3 was an even harder game than 2. It put the group – sadly missing the Driver and the only female member of the team, Natasha – in various points of the war, including the obligatory invasion of Normandy, a staple in games of that time. There’s handful of new and very involved missions with branching objectives and a punishing level of difficulty that challenged even my – back then vast – patience.

One of my most memorable gaming recollections is of spending days inching my way through Stalingrad, trying not to get my gents shot at by an relentless and eagle-eyed encroached sniper in Commandos 3. It’s not the sort of game I would recommend in its original state as a single mistake on your part can put you back hours.

That’s mostly because of the shift to an action-oriented level design that puts extra pressure over an already intense real-time tactics system, where you have to keep tabs on each individual character in your team since they’re not programmed to react automatically in any way. It makes for a hectic and more prone to trial and error game than the rest of the series for sure.

If you’d kindly rewind back to my story about the sniper, for instance, after finally taking that threat out, you’re forced to defend against waves of Germans that storm into the level with few resources and little time to prepare. At the time, in order to give players a chance, Pyro Studios did try to implement a sort of coordination system where you could map different actions to each of the commandos in order to execute them all simultaneously. But it ended up being a feature that required a high level of precision to satisfactorily pull off, even more so in the heat of the action.

And unfortunately, the new HD remaster doesn’t really go out of its way to change these fundamental issues present in Commandos 3. Instead, there are a host of new tutorial messages that try and point you in the right direction to try and alleviate the shock that a lot of new players will get coming into this game unprepared. Focus on *try* there, as they clearly haven’t succeeded.

Other improvements are the usual run-of-the-mill modern tweaks that help constitute a HD remaster. Textures have been bumped up to high resolution along with the UI, and the character models that were part of the series for the first time in this entry have gotten some attention as well. In that department, Kalypso Media have done a decent job making Commandos 3 look sharper than before, though there’s no denying that this is a nearly 20-year old game.

Still in the matter of presentation, following the controversy surrounding the censoring of Nazi imagery in Commandos 2 HD Remaster, Kalypso has opted to add a toggle in Commandos 3 HD Remaster. Now, upon booting the game up for the first time, you get the choice of whether you want to play the game as it was originally, with all of the WW2-period imagery or not. In case you change your mind about your choice, you can find that option tucked away in the main menu, under ‘gameplay’.

There’s a half attempt aimed at making the controls more intuitive with the addition of context-sensitive clicking. Sadly, that ends up being more convoluted than simply using keyboard shortcuts. It’s buggy, with objects and characters that sometimes can’t be selected right away, making it just not precise enough to be a useful alternative. As a result, the controls in this port just end up being messy and frustrating to deal with.

Speaking of bugs, I ran into a funny scenario during my return campaign in Commandos 3. It was during its initial screens, where the Green Beret stars in a tutorial sequence. The game instructed me to pick up a knife – it took many clicks, as it wouldn’t recognize the context-sensitive action – before opening a door and dispatching a German soldier with a punch and tying him up. I did so and it wouldn’t let me continue on. Upon reloading, I tried using that knife to simply kill him, and lo and behold, for some reason, that was bafflingly interpreted by the game as the correct way to finish that tutorial.

It’s a bummer that there wasn’t a bigger effort in fixing Commandos 3 and making it the amazing game that it could’ve been originally. If only the core problems that plagued it when it was new weren’t accompanied by even more now. There are incredible concepts and mission ideas just screaming to come out – the unfolding scenarios, for one, are absolutely brilliant on paper, but are ultimately botched in execution – that make me, a fan of the series, incredibly disappointed with this release.

With the hindsight that there is now, with spiritual successors to Pyro Studios’ work like Mimimi’s Desperados 3 getting it so right, I hope to heaven that whoever is minding the supposed new entry in Commandos takes heed and avoid the errors that were committed in both the original version Commandos 3 and were further worsened in this HD remaster. It could have been so much better…