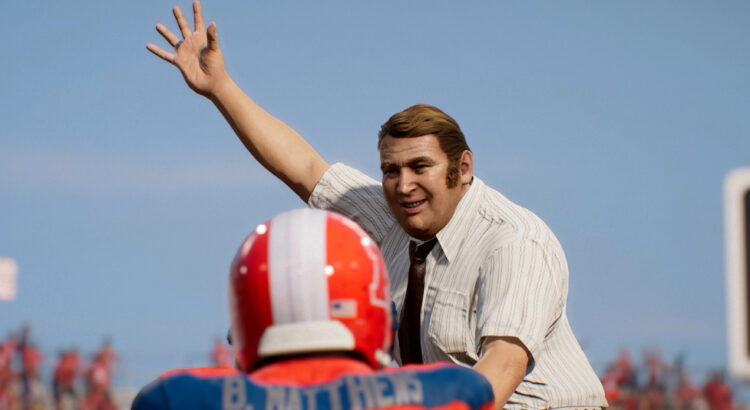 It’s hard to find anyone with a passing interest in pop culture that hasn’t heard the name John Madden. Maybe it’s because of his hugely successful career as the head coach of the Oakland Raiders during the 1970s, or his unmistakable personality as a color commentator on TV for decades… or, well, maybe, Electronic Arts’ continuing multi-million selling franchise, which at this point is simply known as just Madden. Regardless of how you’ve got to know the name, the man behind it surely lived up to it until his passing late last year.

Madden 23 is the first entry in the series to come out after Madden’s death, so it was to be expected that there would be some kind of tribute to him in this year’s game. That’s the main reason I wanted to check it out because in all honesty, year in and year out, the series hasn’t really innovated enough to warrant an yearly review from my part. And that’s not because I’m an American football nut in any way shape or form, but exactly the opposite: I play these in rookie mode exclusively.

So it was nice to see that EA Tiburon did that part right. The opening to Madden 23 has a rather loving little montage of some of the Coach’s best moments both as a head coach and as a commentator, with clips, voice cuts, and a whole lot of his trademark teleprompter doodles peppered in between. Then it’s off to an “All-Madden” game where two teams head off, both with a version of Madden in the sidelines as a coach, with the man rendered in the look of a particular period of his Raider career.

It’s presented as a recap of his life and continued growth into the ever-living name that he is today, with both the virtual commentators talking about the many important moments that served to build his legacy. It works somewhat well, but given that it’s a playable portion of the game where you have to pay attention to what you’re actually doing, not to mention all the noise from the stadium it’s being played in, you might find yourself having a hard time hearing and understanding what’s being said at all.

Then again, what would be a better way to honor the man than having his eulogy being blared out in a crowded field of screaming fans and big, sweaty men hurling themselves over one another over a ball? I can’t think of any. Outside of that, his presence is also made in the menus, where the same model that you see in the field during that match stands around as you make selections, and there are plenty of those to be made, as usual.

In that regard, little of what’s in Madden 23 is particularly new for returning fans. You get to play the usual team-building modes like Franchise, where you pick a team and work on all the preparation before even entering pre-season and take it all the way to the Super Bowl. In Ultimate Team, it’s Madden 23’s own micro-transaction insanity that’s present in every EA game ever nowadays, and in the end, it’s your wallet that does the talking.

It’s perhaps the game’s potentially most interesting mode, Face the Franchise, where returning players might find themselves thrown off the field a bit. Back when I made my jump back to the franchise in 2019, I was particularly excited with the prospect of playing a more story-heavy mode in a sports game of all places, and for better or for worse, Madden 20 delivered it. Madden 23 strips away that aspect from this mode in favor of a more straight to the point approach, where you create a customized player, pick from one of a few possible positions and have him evolve in one of two sub-modes. One hinges on playing online 6v6 games against other people, and a more single-player focused affair, where you slowly build your guy out, having him pick a starting team and get his career going from there.

It was jarring to me to have a drier approach to having a created character simply getting put to the grinder without any of the admittedly neat and more personality driven story – for the lack of a better term – that was in the last best Madden that I played. But then again, I can kind of understand that change was done to appease the harder core fans that just want to get straight into the action without having to bother with much in the way of whether your not their guy would go out of his way to please a fan and score six touchdowns in a game.

I’m fine with a change like that because it’s clear that these games aren’t really aimed for the more casual player, and rather than try to please a smaller audience with a half-baked faux RPG, they’re openly having the entire thing just be an entry point to playing online and having some kind of progression through the whole thing. What isn’t okay is not having much in the way of explaining how some of the revamped systems work.

Straight after the initial All-Madden game, you’re put to training camp in order to learn the passing game that supposedly has been changed this time around. It’s now more skill dependent, according to Madden 23 anyway, and you have to fiddle with meters and such just to pass a darn football around. The game’s convoluted in the way it tries to teach you how to use the system by just having you try each of the types of passes without much in the way of showing you the timing or anything of the sort. You just try your luck and if you fail, too bad, keep going.

Thankfully, the choice is there to just use the old tried and true pick-a-player-and-just-throw-it-to-them. And it works just fine, or rather, as well as it can when I’m the one doing all the deciding. In the heat of the action, a footballer such as myself who plays in a hectic fashion, where even Rookie mode Madden 23 can be quite intense, having simpler passing is paramount.

Visually, Madden 23 gets as close to the real thing as it can for a game that’s stuck between two generations of consoles. On PlayStation 5, where I played for review, it looks good enough for a double take when the camera’s aimed at the field in the same manner as an actual NFL broadcast. Gear looks especially realistic, with the appropriate shine from the helmets to the way jerseys and cleats get dirtier and dirtier as a game progresses.

But when it closes down on the players, it’s the animations that give away the fact that it’s merely a simulation of American football. Players look good doing their thing when plays are happening, but in between downs, when they’re milling about, there’s just something off about their behavior. And I get it, it’s very difficult to animate people when they’re not acting out whatever their job is. It’s ever so evident in here, where camera cuts stick around for half a heartbeat longer than they should and you almost can see the A.I’s gears turning when it’s not time to act their role.

Otherwise, when it gets going, it feels very authentic to the sport. EA’s been touting the so-called FieldSense system, where the physics simulation is even more grounded and realistic, and in most accounts, it works. It’s not perfect, though. Players sometimes have the tendency to be more slippery than probably intended, especially when it comes to the tackling, but given that this is their first go at this, I can see it being a big part of giving a bigger crunch in the next installments of Madden.

For what it is, Madden 23 will please veterans looking to prolong their videogame NFL careers in yet another season of play. The homage to the late John Madden is certainly a nice touch. On the other hand, a more welcoming presentation to newcomers would have worked to the game’s favor. As it stands, those just coming out of the draft might find themselves feeling lost as there’s not nearly enough in the way of easing in players who don’t have at least some passing familiarity with the series and how it plays.