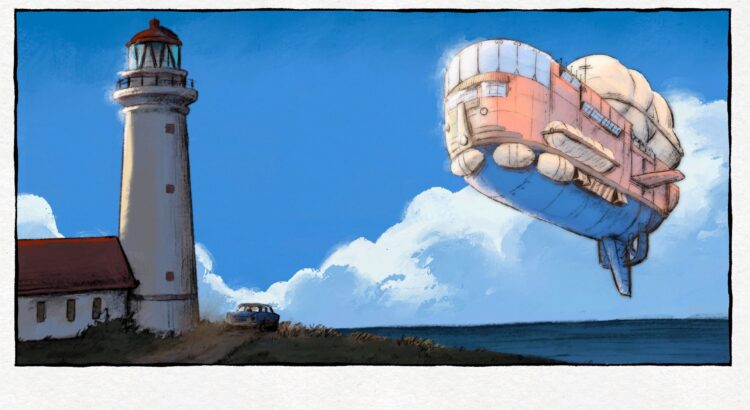 I can’t really think of another game which is exactly like Wayward Strand. It is part experiment in non-linear storytelling, part interactive story, and part life simulator. For fans of emotional narrative adventures, it’s certainly worth experiencing as something unlike anything else.

In Wayward Strand you play as Casie Beaumaris, a young Australian girl who, during her school holidays in January 1978, is drafted into helping her mother look after patients on the geriatric ward of the local hospital in her town of Powlett. What makes this hospital special however is that it’s housed in a gigantic old airship, permanently moored floating over the sea. Despite this somewhat fantastical premise, the world of Wayward Strand is otherwise entirely ordinary, with history seemingly evolving exactly the same as our own world, besides the existence of huge airships. In (accelerated) real-time you experience three days aboard the hospital, interacting with the patients, helping out when possible, while also overhearing many rumours and gossip.

Wayward Strand doesn’t have a single narrative, or a “story” per se. Instead, there is a series of intersecting stories, which intermingle and merge with the patients and staff at the hospital, and Casie’s experiences. Each patient has their own backstory and reminiscences about their life, while the nurses, Dr. Shen or the handyman Ted can also provide their own insight. Each day on the airship unfurls in real-time, and it is literally impossible to see everything in one playthrough, because often several different conversations will be happening in different parts of the hospital, and it is impossible to be in two places at once. Ida may be having lunch with Tomi in the restaurant, while Mr. Avery is chatting to Nurse Lily, while elsewhere Esther is off in her room. Each day the patients and staff go about their business and your impact is who you choose to speak to and which conversations you manage to overhear. Casie writes down everything in her journal, so you can check back on all the information you’ve learned about each character.

The characters are indeed the heart of this story, especially the six main inpatients. Neil Avery is a writer who is rather pompous but kind-hearted, while Heinrich Preuss is a former Austrian pianist who speaks slowly and carefully, and needs a wheelchair to get about. Esther Fitzgerald has a fierce temper and complains about almost everything, but her bark is worse than her bite. The most upsetting case is probably Dr. Bouchard, Casie’s former doctor, who is now in the hospital with terminal cancer. Despite the regular reminder of death and the patients discussing a former inpatient who recently died, I didn’t find Wayward Strand bleak or depressing; it is more uplifting and about cherishing the everyday moments we have with people, and how even in small ways, you can make people’s lives better. This is highlighted by the dialogue choices you can make as Casie, which involve asking questions about life on board the airship, about the life of the inpatients, or helping them out in small ways, such as getting Mr. Preuss’ comb and mirror.

This is also a very Australian game, in a good way. The voice acting from the entire cast is excellent, with numerous references which Aussies should enjoy. Likewise it also helped to teach me a little bit about Bunurong aboriginal life, especially apt given the game is part-funded by the Bunurong Land Council. Visually, the game has a kind of painted postcard aesthetic, played from within a white bordered box. You look at the airship in a cutaway, side-on view, zooming into particular rooms when you enter them. There is also a very relaxing piano soundtrack which suits the relaxing mood of the game very well. I did experience a couple of visual bugs which will hopefully be patched, but the most pressing issue is the lack of mid-chapter save points. As chapters last an entire day, and each day is usually about an hour of gameplay, the inability to save during a day can lead to losing a lot of progress if you have to quit early or your computer has issues.

Wayward Strand is a very unique game with a lot of heart, and it tells its non-linear, intertwined narratives in a very naturalistic fashion, which you can freely jump between as you guide Casie across the decks of the airship. The game’s ending is somewhat lacklustre, but I admire that the game didn’t attempt to invent a dramatic finale simply for the sake of it. It’s certainly worth a playthrough or two to see the various stories and conversations you missed the first time around, and the heartfelt, caring atmosphere it fosters will help to raise your spirits.