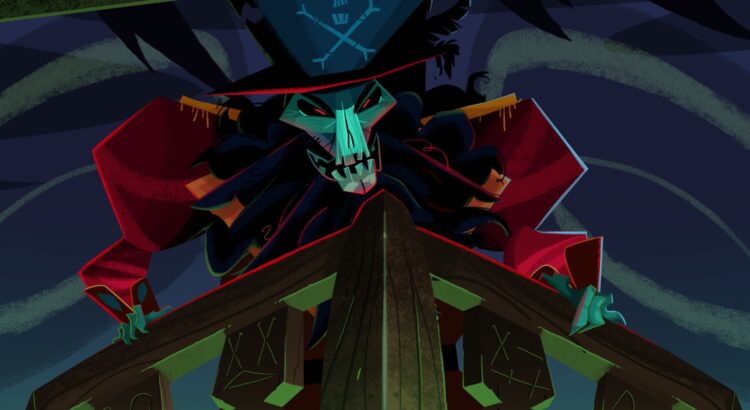 My gaming history is irrevocably linked to Monkey Island. Monkey Island 2: LeChuck’s Revenge is the very first game I ever played, around about 1993. I still have the original floppy disks to this day. At the time, four year-old me didn’t know anything about video games; all I knew was that Monkey Island 2 was about pirates, and I loved pirates. I only have a couple of memories of actually playing the game; first the complicated code wheel entitled “Mix n’ Mojo” you had to use as copy protection to actually play the game, and then the scene where Guybrush Threepwood helms a coffin to find the Voodoo Lady’s emporium in the swamp.

Almost certainly I didn’t finish any of the puzzles and never made it off Scabb Island, but it started my lifelong love of video games, and adventure games especially. Coupled with the fact that The Curse of Monkey Island (the third game in the series) is one of my all-time favourite games, and you can certainly call me a Monkey Island fan through and through. Therefore, when it was announced earlier this year that Monkey Island would be getting a new instalment in the franchise, and that original series creator Ron Gilbert would be returning alongside Dave Grossman to lead the project, my excitement levels were high to say the least.

Return to Monkey Island is not a direct sequel to Monkey Island 2, despite what you might have heard. Instead, it takes all the games (yes, even Tales of Monkey Island) as canon, giving Guybrush a new, and yet old adventure; to finally actually find “The Secret of Monkey Island”; that is the actual Secret, not the similarly named game. Despite Guybrush’s myriad adventures, he hasn’t actually spent a great deal of time searching for it before now.

In the first game, he was more preoccupied by rescuing Governor Elaine Marley (whom he later married) from the zombie ghost pirate LeChuck. In the second, finding a different legendary treasure (Big Whoop), in the third, rescuing Elaine from a curse which turned her to solid gold. You get the idea. Therefore, at the start of Return to Monkey Island, when Guybrush hears that his nemesis LeChuck is also out to search for the Secret, he makes it his mission to beat LeChuck to the punch. There is also a frame story, the details of which I don’t want to spoil, but it’s a fun early reveal.

This is through and through another Monkey Island point-and-click adventure game, although it is somewhat streamlined from earlier entries. The bulk of items in the environment can only be interacted with in a maximum of two ways, controlled by left or right click. Most of the time this is either inspecting something, talking to someone, or picking something up. Inventory items just show a red X sign if you attempt to use them with other objects they don’t apply to, meaning you won’t be hearing Guybrush say “nah” or “I can’t do that” ad infinitum.

There is also an in-game hint book; a boon for games like these where the puzzles can occasionally be somewhat esoteric. The number of environmental jokes is down on earlier instalments too; they’re still here, but most locations feature rather less random background gags. While the game starts out in the familiar territory of Mêlée Island and does indeed return to the titular Monkey Island, the plot also takes Guybrush to a host of new locations across the Caribbean. Compared to Monkey Island 1 or 2 this is a much lengthier game, more on par with The Curse of Monkey Island and later games.

The writing is generally just as sharp as it was in previous games, although I do feel like the number of jokes occasionally feels a bit light, with Guybrush generally having less time wasting options in conversations (although they definitely still do come up still when required). There is perhaps a wish not to trot out all of the franchises in-jokes all at once, trying to ration them out across the runtime.

The voice acting is stellar across the board, with almost every person who originally voiced the characters returning, crucially Dominic Armato as Guybrush, Alexandra Boyd as Elaine, Denny Dalk as Murray the Demonic Skull, and Leilani Jones Wilmore as the Voodoo Lady. The only main newly cast voice is LeChuck, as Earl Boen, who voiced the character in most of the older games has now retired. Jess Harnell replaces him and does a great job. There are also a host of new characters including a new trio of Pirate Lords, the Mêlée Island locksmith, and the crew of LeChuck’s pirate ship.

Despite the visual aesthetic of the game getting a rather mixed reception when announced, I think the new art is truly wonderful. Although 2D, there is still some 3D animation on many characters and environmental elements, which gives everything a very fluid and smooth appearance. Conversations feature regular cutaways to show faces up close, which look superb. Guybrush is back wearing his blue coat from Monkey Island 2, while the sharp, stylized angles on many characters give almost a cubist impression. If you recall the rather limited visuals of the first two games, this art style attempts to replicate a similar hand-drawn but colourful storybook look. Considering the subject matter of pirates and buried treasure, it’s perfect.

It goes without saying that the music is also amazing; series composer Michael Land returns alongside Peter McConnell and Clint Bajakian with new remixes on familiar themes combined with many brand new pieces of music. The theme when entering the SCUMM Bar is iconic, as is the newly recorded main title theme. I especially liked the variations on LeChuck’s theme which alter depending on which crew member you’re conversing with. It’s not as lush as the full orchestra of The Curse of Monkey Island or Monkey Island 2 Special Edition, but it still manages to build loads of atmosphere.

I don’t feel that Return to Monkey Island is necessarily “the best” of the Monkey Island franchise, but it is another thoroughly satisfying addition to the collection, being a long way from the series worst (which was most probably Escape from Monkey Island, while Tales of Monkey Island had many great bits but was quite uneven). Considering this is the first non-episodic game in the series since 2000, and the first two-dimensional game since 1997, being able to return to the Monkey Island universe and spend time with this cadre of familiar characters feels like sitting down to a nice dinner with a group of old friends.

The special editions of Monkey Island 1 and 2 in 2009 and 2010 respectively showed that there was still a voracious appetite for more of Guybrush’s adventures, so I’m glad that Ron Gilbert and Dave Grossman finally got to have another shot at “ending” the Monkey Island story in a manner which they envisaged. Return to Monkey Island is more Monkey Island, and if you’ve been missing out on that for years, this is an excellent return to form.