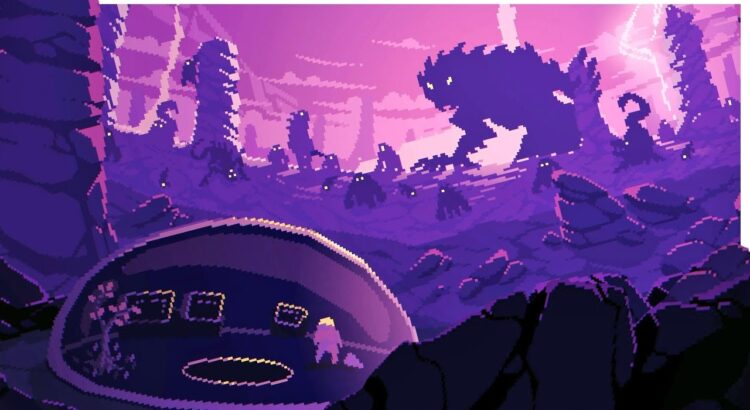 If you were to combine the 1980 arcade classic Missile Command with the indie hit Steamworld Dig, you would end up with something a lot like Dome Keeper. In keeping with the developers’ background in game jams, this is a slight and simple roguelike which combines mining with static defence and is arguably best suited for short sessions.

There’s no story to speak of here. At the outset of a run, the dome of the title crashes down onto the surface of an alien world. In the default game mode, the player must guide their plucky pixel engineer to mine below the dome and recover a buried relic. This phase strongly resembles mining games like Steamworld Dig, except that the engineer is equipped with a jetpack for mining upwards or returning to the dome.

Unfortunately for the engineer, the search for the relic is complicated by the locals. Periodically, waves of mysterious shadowy creatures of various kinds will assault the dome, which requires a quick return to the surface. The engineer plugs into a console and operates the static defences to fight off the attackers, in a phase which recalls Missile Command. Should the dome be destroyed, the run is terminated.

Crucial to both of these modes of play is the game’s extensive tech tree. Resources found below the surface and yanked back to the dome can be traded in for various upgrades. The choices can be a bit overwhelming. Is it better to increase the dome’s health, to buff the engineer’s flight speed, or to improve the damage output of the dome’s weapon? It’s a small mercy that combat is paused while players mull over these options.

While both of the phases are engaging, the regular switch between them threatens to become monotonous – even on the smallest of the three possible map sizes. This is where gadgets come in. These are special pieces of equipment selected, from a randomised choice of two, each time the player recovers a special alien node from underground. These are crucial to sustaining the game’s appeal, because they always change the way it plays.

One option, for example, is a loveable alien creature called Drillbert which automatically mines even in the player’s absence and can be fed treats which boost its speed. Alternatively, players can choose a condenser which produces water automatically, or an additional laser gun for the dome which temporarily stuns foes. Combinations of gadgets give each run a distinct feel, especially on larger maps.

While each successful relic recovery unlocks something new – like a curious sword contraption in place of the usual laser cannon – it doesn’t take long to see all that Dome Keeper has to offer. Even with improved flight speed, returning to the surface repeatedly can be a bit tiresome, and the game doesn’t reward long sessions of play in the way that Nuclear Throne or Hades do. This is a much more modest experience, better suited to lunch break gaming than anything else.

Dome Keeper is a labour of love for developer Bippinbits, a two-person team based in Dresden who are also a couple. According to publisher Raw Fury, it was in profit from day one and it is easy to see why – this is a simple game, but one made to a high standard. Its pixel art, wealth of upgrades, and clever sound design are all praiseworthy. Those looking for a deeper roguelike experience should look elsewhere, but ironically Dome Keeper is ideal for players in the hunt for something a bit more surface-level.