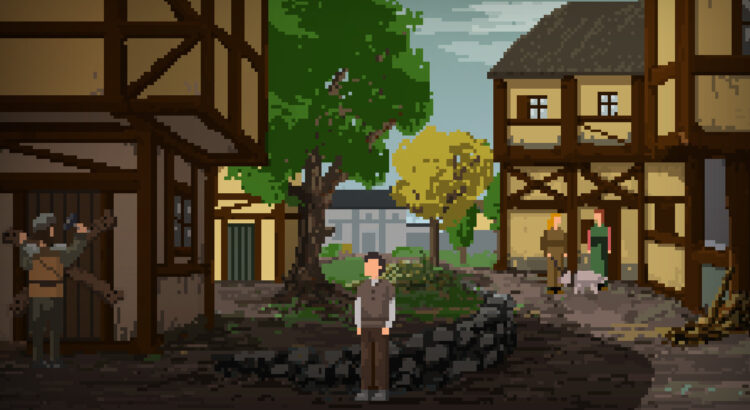 Although we are still dealing with the impact of the COVID-19 pandemic which has killed at least 6.5 million people worldwide, the scale of the pandemic fails into insignificance compared to the Black Death (or plague), which afflicted Europe during the 14th Century. It is estimated the Plague killed between 75-200 million people, or between 30-60% of the population of Europe at the time. Whole towns were abandoned and it took at least 200 years before the population reached the levels they had been before the plague. At the time, germ theory was not understood and most medicine relied on a good deal of superstition, making prevention difficult. Plague doctors had a mixed reputation, some allegedly being charlatans who pretended to have cures, while others helped as best they could.

The Plague Doctor of Wippra is a small point-and-click set in the aforementioned German town where you play as an aforementioned doctor, trying your best to ease the suffering of those afflicted with the disease while also dealing with the religious fervour of the local citizenry. While the setting is interesting, the rather basic writing and some extremely frustrating puzzles make this the kind of point-and-click where a walkthrough will be handy, as it lacks any kind of in-game hint system.

The game follows the player character, an unnamed doctor as he goes about his day, tending to a sick family in town before visiting the convent-run plague hospital. Each situation gives you a puzzle to solve, such as working out how to prevent the family of a young boy with the early symptoms of plague from starving to death, as the town edict is to barricade plague sufferers into their homes. The environments, your inventory and interactable items in the area are limited, and all puzzles require using a particular item with another, or using logic to deduce the solution. While many of these puzzles are intuitive, a number are extremely obtuse. I spent absolutely ages trying to find the correct solution to one particular problem in the convent; I knew the steps the game expected me to follow, but I couldn’t find the exact first step until via process of elimination I started using every single object in my inventory with every other object. The lack of any hint system means that when you hit a dead end, a walkthrough is the only recompense.

Most characters are rather two-dimensional; you don’t really get to know anyone in a meaningful sense given the game’s brevity, but also the straightforward writing style, which doesn’t aim to give loads of circumstantial detail but just workmanlike requests, such as telling the doctor what his next job is. That’s not to say there aren’t historical details; the game explains for example the emergence of Protestantism with Martin Luther’s 95 Theses, as well as the persecution faced by Jews during the Black Death, which led to many being murdered. I appreciate that most of the game was developed by a single person and that to release a finished product itself is an achievement, but I think more time spent building the world into something people wanted to learn more about would have been worthwhile.

The art style is a very pixelated and minimalistic one with little detail in most scenes, very reminiscent of The Last Door. It works fine for the purpose of the game but means that most scenes feel very static and not very lifelike. Due to the shortness of the experience there aren’t that many locations to explore either, but there are enough for the purposes of deducing the various puzzles. The actual finale of the game is arguably the best aspect, where your performance as a doctor and the decisions you made during the story are brought back in a form of judgement, which I admit I didn’t see coming. This means there is some replay value here from making different decisions or medical procedures, and seeing which ending you’ll get.

For seasoned adventure game players, The Plague Doctor of Wippra will be sufficiently challenging and enjoyable that it can be completed in a single sitting. For more casual players, the rather frustrating puzzle design means a walkthrough must always be nearby to prevent the levels of annoyance I encountered while playing pre-release, with no such guide available. It’s worth seeing for the fairly unique setting, but its brevity, lack of character and worldbuilding left it feeling rather underbaked.