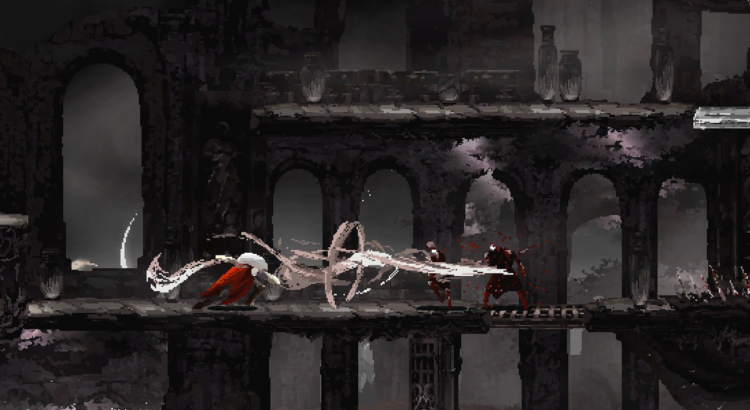 One of the common conceptions of what a Souls-inspired game needs is to be difficult. Most games operating in that space make difficulty core to their design, sometimes to mixed results. For every Hollow Knight, there are just as many games who fail to walk that fine line between an engaging challenge and a frustrating one. Moonscars often falls into the latter category, unfortunately. A side-scrolling action game from developer Black Mermaid, Moonscars does a lot of things well and has some very cool ideas that it executes confidently, but is ultimately defined by whether you have the patience for its particular brand of difficulty.

In Moonscars, every time you die, you have a chance of activating a condition called “Moon Hunger” that makes the game harder. Enemy attacks become stronger, some of them even becoming bathed in red to signify them as much stronger foes, but you also gain more bone dust per kill. You can clear it by sacrificing a “gland,” a limited use item, at a checkpoint. On paper, it’s a risk/reward system that encourages you to play under harsher conditions for bigger gains. I found bone dust difficult to accumulate, so getting a boost to my earnings was an appealing prospect, even if that meant I had to take on a bigger challenge. If I can get some good spell upgrades and buy some nice trinkets to give myself an edge, it’ll all pay off in the end, I figured.

In reality, Moon Hunger is more annoying and punishing than it appears due to the frequency of its activation. For a while, it would only activate after several deaths, which is sensible: it adds to the intended risk/reward factor and gives you some leeway on the difficulty increase. It also creates additional tension on which death will be the one to throw you back into the Moon Hunger phase. But at some point, it would become active on every death and has remained that way ever since. So if I spent a gland or defeated a boss (which also clears Moon Hunger) and then die soon after for any reason, I’m immediately back in it, forced to contend with hard mode once more.

Against most regular foes, it was annoying at worst, but ultimately manageable. Against bosses? Frustrating. Because you’re almost assuredly going to die plenty of times before you take down any of the game’s bosses, you’re effectively forced to fight harder versions of each one. The difference of strength with Moon Hunger on versus off is significant. With that status active, I could only take one hit before I needed to heal. Without it, I could take at least three, maybe four hits even, before I had to heal. That may not sound like much, but it makes a world of difference. It gives you room to make mistakes instead of having to play almost perfectly. I’m not opposed to a challenge, but the margin for error is too low.

In a vacuum, Moon Hunger is no worse than, say, Demon’s Souls cutting your health in half on death if you weren’t already in “soul form.” It’s mean, but it’s still technically doable. You’re just going to have a harder go of it. The difference is that, because Demon’s Souls was quick to force you to play with less health (literally past the tutorial), the game makes it clear that this is going to be the default state. The reduced health hurts, yes, but functionally, the game is built around it, so it doesn’t immediately feel like you’ve been punished.

Moonscars, by comparison, feels like the opposite. Moon Hunger feels like a punishment because it only becomes active after several deaths at first. It doesn’t create the expectation that this is the default state of the game, which means it suddenly becomes harder at some point and all you can do is put up with it or hope you can always keep enough glands on hand to clear it on every death. If it was something that only became active at random intervals after a certain number of deaths, sure – no big deal. But on every death? There’s no point in trying to avoid it.

(Should note that there was a patch that did some rebalancing regarding this system, but I couldn’t see any immediate differences.)

It’s disappointing because Moonscars is a great game, otherwise. Its combat doesn’t try to adapt Souls-style mechanics wholesale, so it’s able to play to the strengths of the side-scrolling form well. It’s fast and responsive, attacks being dealt quickly and landing with a satisfying feeling of weight. Jumping and dashing through attacks without restriction feels good, as it lets you move fast and freely in ways you wouldn’t have been able to had it chosen to be more methodical and defense-oriented. The way it incorporates environmental hazards like spiked walls into play (a parry or a charged attack can knock an enemy right into one, killing them instantly) give the action some flair and encourages good use of your abilities rather than just swinging your sword wildly. Having to defeat a doppelganger of yourself every time you activate a checkpoint (and thus receive their power) is an inspired choice, “spite bonuses” just as clever for granting small boons over time that remain for as long as you can avoid dying, giving each life meaning beyond the threat of losing whatever bone dust you accumulated because of the material effects they confer.

There’s a lot to like in Moonscars, but it’s dependent on your patience with its approach to challenge. Some, I’m sure, will relish the ways Moon Hunger demands near perfect play once active; a sort of built-in challenge run. It’s a game I like a lot in many ways, a game full of great ideas and striking scenes, but I just cannot reconcile its difficulty. I wish I had it in me to keep pushing forward.