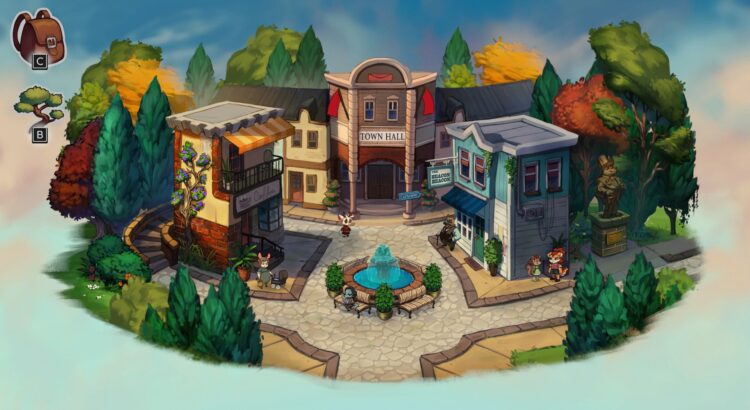 Many games have featured branching narratives as a central concept. Games such as Life is Strange or The Walking Dead give the player various points where their choices can shuttle the story down one of several different branching paths. Have you ever wanted to see what it would look like to be able to do and redo every decision in a game, and see the consequences? The answer is the delightful adventure game, Beacon Pines.

Beacon Pines has a deliberate storybook aesthetic, with a narrator reading the story to you as though from an illustrated book. It places you in the role of young Luka VanHorn, an anthropomorphic deer who is looked after by his elderly grandma following the death of his father and his mother mysteriously vanishing earlier in the year. Luka is friends with Rolo, a rotund ginger cat, and soon becomes friends with Beck, a young black cat. Together they begin an adventure during their school summer holiday in the titular town, surrounding the mysterious local abandoned factory where strange noises have been emanating. From here, things can unfold in a variety of different ways, which brings us to the game’s secret weapon.

The underpinning element of Beacon Pines is the branching narratives. Every so often the Narrator (wonderfully voiced by Kirsten Mize) will bring you out of the game and back to the storybook, in order to make a particular choice. By interacting with objects and talking to characters, Luka will gain access to particular “charms”, basically words of power which can radically alter the way the story will unfold. Each of these choices is presented on a literal story tree, showing the different narratives branching away from each other. The game allows and actively encourages you to see and experience each of the different branches. Many of these branches can lead to unfavourable, even fatal conclusions, and your job is to basically discover the ideal combination of choices to finish the game via the most beneficial route. You’ll have to go down some story paths which might lead to bad conclusions in order to uncover more charms which can be used at story decisions. Once you’ve exhausted a charm, a check mark appears next to it, which makes it clear which paths have been completed and which haven’t.

It helps a lot that the game is written to be full of such excellent personality. Although the rest of the game doesn’t have voice acting apart from the Narrator, it is written in such a way that you immediately understand the persona and spirit of each character. Rolo is friendly and always eager for adventure, while Beck is a little troubled having recently moved to the town with her mothers, but not having made any friends. Minor characters such as Dawn, the bat reporter for the local paper, or Kado, who volunteers at the local library and is on a mission to read literally every book there, are also full of charm. Despite the somewhat dark turns that some of the story paths can take and the themes exploring issues such as mental health and family relationships, overall the game has a very personable and easy-going style, with what drama there is never feeling completely insurmountable thanks to the ability to go back and change your decisions whenever you wish.

Visually Beacon Pines is also a feast, with its painterly storybook and cute townscapes combined with the nicely designed anthropomorphic animals, all giving the game a bright and cheerful vibe. Sometimes you just want to luxuriate in a “nice” game, and Beacon Pines is definitely one of them, and despite the town of Beacon Pines having its problems, it’s still generally a great place to be. Likewise the music is nicely uplifting and relaxing most of the time but sometimes ominous and brooding when the situation calls for it.

In many ways Beacon Pines is a fairly standard adventure game but the great emotive writing and specifically the branching narratives exploration do make it feel quite different from other games of this style. Being able to go back and undo any decision and choose differently, and then play through that path before jumping back to the old one can lead to interesting developments, such as meeting certain characters earlier, or learning information which while you as a player know, Luka and his friends experiencing this linearly do not. There are minimal traditional puzzles and most of the game involves talking to the right characters, but there is certainly plenty of atmosphere and personality in every part of the game. Beacon Pines is a lovely way to spend some hours in the company of some charming characters and a nicely emotional sequence of branching narratives.