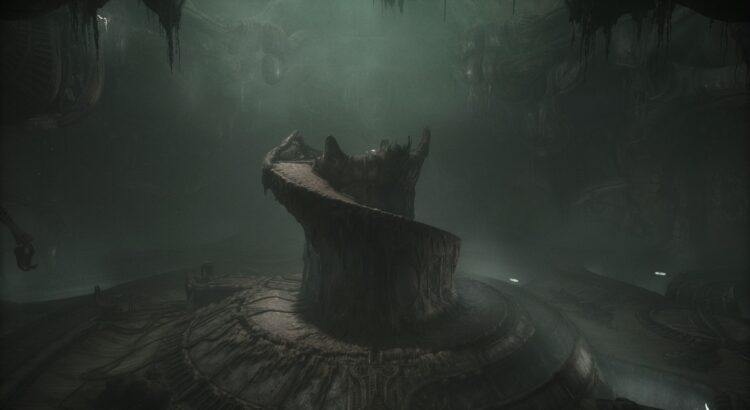 Scorn is the most visually horrific game I’ve never played. This is meant 100% as a compliment however. The game is directly inspired by the designs of H.R. Giger and Zdzisław Beksiński, both of which created some intensely memorable and disturbing imagery. Scorn is first and foremost a first-person puzzle game, and although it contains some shooting and other elements, these take a backseat compared to the puzzles. In this regard, it’s almost best to describe the game as a gruesome variation of Myst, but with visuals which make everything look like the cover of Emerson, Lake and Palmer’s album “Brain Salad Surgery”.

Scorn features no voice acting and most of the story that happens must be inferred rather than directly told. You play as a vaguely humanoid person on a completely alien world, in a completely alien environment. After falling down a massive crevasse, you awake within a subterranean structure of interconnecting hallways and dungeons, and then try to find your way out, or deeper, as the case may be.

The entire game is dripping in foreboding, every single environment and every single scene feels dark and bleak; a world stripped of any happiness or joy. In this regard it reminded me of I Have No Mouth, and I Must Scream, the short story and adventure game by Harlan Ellision which inhabits a similarly hopeless world populated by nothing but a supercomputer determined on torturing the last five humans alive for eternity.

For most of Scorn, you’ll be exploring some fantastical and grotesque environments, poking at various different infernal machines and seeing how they work. As mentioned there is a Myst-like quality to many of the puzzles, forcing you to use logic and deduction to see how things fit together. The first major puzzle for example requires you to transport an egg along a miniature railway, but you’re never told or handheld how to get the egg onto the railway, or even where the puzzle begins. In this regard it respects the players own intelligence, but some may be frustrated by the puzzles which definitely harken back to the Myst era of game design, which some might consider obtuse.

There is also shooting, as you get access to something approximating a gun about a third of the way into the game, but it’s not great. The shooting is relatively unresponsive and you get minimal ammo, meaning you are dis-incentivized to fight creatures. Often, it’s better to run past enemies rather than try to take them on, especially given the rather ungenerous checkpoint save system.

As mentioned, the visuals are the primary draw of the game, and their awesome terror cannot be understated. Everything looks like it was grown rather than built and is covered in flesh-like moss, the discarded bodies of dead aliens littering many locations.

It should also be said this is a genuinely an incredibly gory game, and if you are in any way sensitive to body horror, you should avoid it. I sometimes had to look away from the screen when something particularly awful was happening, usually various injuries or dismemberments with plenty of spurting blood. The music is mostly atmospheric in nature and is primarily a series of droning tones, which certainly helps to make every new room you enter feel appropriately ominous, even if nothing immediately happens.

If you enjoy a grisly and gory game and are up for some Myst-like puzzles, Scorn has got you covered. Prior to release the game somewhat misrepresented itself in marketing, coming across almost as a shooter in the style of Doom (2016) or Doom Eternal. In the end, while there is certainly combat here, it feels like distinctly the weaker part of the offering, with the intensely dark and alien atmosphere combined with the puzzles forming the main draw.

It’s also quite a short game, although I personally thought the length was sensible given this kind of overwhelmingly horrifying atmosphere can become tedious if used too long, which was one of the criticisms pointed at the otherwise excellent Alien: Isolation. Scorn is a difficult game to love, but for its singular visual flair, it is one I respect.