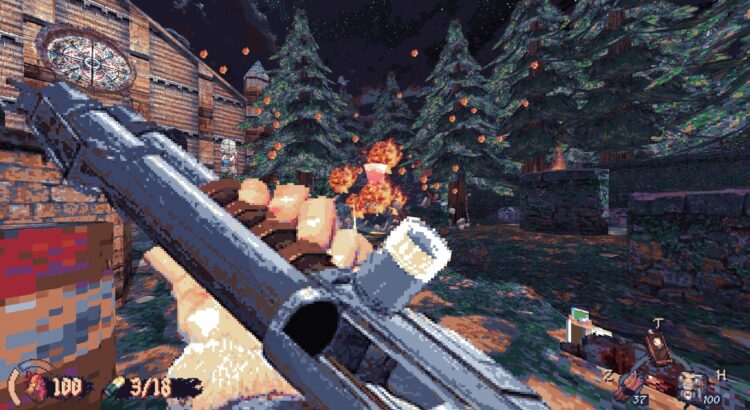 Today’s glut of “boomer shooters” is largely inspired by just a handful of classics from the original golden age of roughly 1993 to 1997. Any new game runs the risk of seeming too similar to one of these icons, of lacking its own identity. At first glance, Cultic seems sure to fall into this trap, given its evident similarities to Blood. In fact, Jason Smith’s fantastic first project uses Monolith’s 1997 game as a jumping-off point – and ultimately delivers one of the best retro shooters in years.

Blood was one of the last major shooters of its kind. Quake had already ushered in fully-3D graphics, and Half-Life would soon pioneer a whole new paradigm that emphasised narrative and immersion. Monolith weren’t working with id Software’s cutting-edge technology, and didn’t share Valve’s storytelling ambition. Instead, they fused top-drawer level design with satisfying weapons and a novel horror theme. The result was dynamite – literally. Blood has been a favourite for 25 years now, and has influenced numerous other games, notably including Dusk.

Cultic’s first map, “The Grave”, opens in a style that very obviously riffs on Blood. The player climbs out of a pile of corpses, picks up a hatchet, and starts battling a horde of brown-robed cultists. The influence of Monolith’s much-loved work is everywhere. The two games share a similar muddy colour palette, weapons, enemies, and settings. All of these elements are handled so well that Cultic almost immediately feels like the great sequel Blood deserved, but never received.

Crucially, though, the game strikes out on its own path. Introducing modernisations into a retro shooter is work fraught with risk, but Cultic walks the tightrope expertly. There are journal entries to read, a weapon upgrade system, and the occasional scripted set piece. Any one of these could have been overdone, could have become an obstacle to the core experience, but they are integrated so thoughtfully that they never do. Some of the additions are inspired, such as the ability to slide and a “mare’s leg” lever action rifle that delivers some gloriously satisfying headshots.

Level design can make or break a game like this but Smith’s competencies are not in doubt. The maps here are larger than was normal in the games of the glory days, but never tiresomely so. They hit the sweet spot of capturing the feeling of an actual locale – like a boatyard or a mine – without attempting to be realistic. The maps seethe with enemies and there are numerous cleverly hidden secret areas. Exploration is well rewarded and players wanting to upgrade their weapons extensively will have to search hard for the required parts.

The combat in Cultic reflects Smith’s deep grasp of how a retro shooter is supposed to feel. Tackling the cultists, zombies, misshapen beasts, and gun-toting skeletons is consistently thrilling in both small and large engagements. Every weapon fulfils its own niche, and success means switching between them often – another sign of an accomplished FPS. The rifle isn’t the only excellent death-dealer here. Dynamite and Molotov cocktails are as gruesomely fun as one would hope, and can even be combined together. It should be noted that the cultists here are about as quick to react and deadly accurate as the ones in Blood, but newcomers are well catered to by the lower difficulty settings.

This initial release may contain only Cultic’s first episode, but it is a generous offering. There is a sense of escalation over the course of the ten maps, evolving from small-scale skirmishes in a deserted town to a sprawling minor war within an occult excavation. Players will sense their capabilities growing in lockstep with the challenge, as weapon upgrades kick in and the slick movement system becomes more familiar. Cultic starts well, but really begins to sing in the late game, with the maps “The Asylum Grounds” and “The Asylum”. Sprinting into a slide or jumping through a window, demolishing zombies with a sawn-off or popping heads with the lever-action, is just pure, grisly fun.

Conquering the ten maps will take something like five hours, which given Cultic’s price point is a very reasonable length. Sweetening the deal is a wave-based survival mode, which has three maps based on areas from the main campaign. Everything the game has to offer is sountracked by Smith himself and the music is superb, with some strong John Carpenter vibes.

Even with just one episode at present, Cultic leaps into the top tier of retro-style shooters, alongside the likes of Ion Fury, Dusk, and Amid Evil. Jason Smith’s deep knowledge and intuitive feel for these games runs through every element here, and with more episodes eventually on the way, it could yet reach even greater heights. Get sized up for robes – this is a cult worth joining.