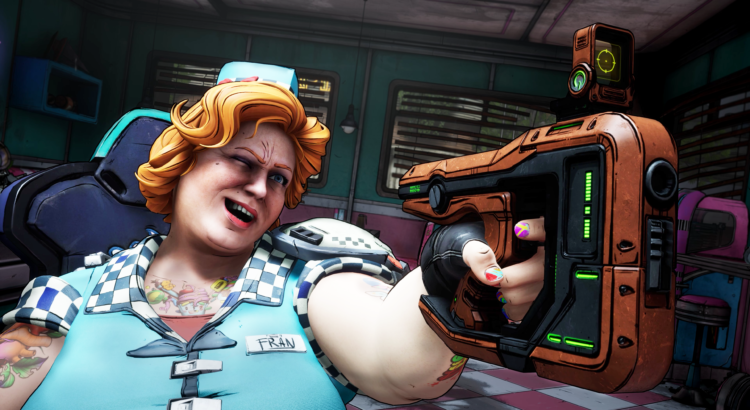 When Telltale Games closed its doors in 2018, it seemed like it was the killing shot to their flavor of adventure games, the one made oh so popular during the 2010s with The Walking Dead. And that seemed to be the case until little over a year later, ironically enough, their final project, which was well on its way into development was picked back up and released in the form of the final season of the very game that put the company’s name on the map.

Although I’m a particularly big fan of that series especially, it’s undeniable that another game produced in conjunction with Gearbox also happened to be one of Telltale Games’ biggest sellers. Tales from the Borderlands, released in 2014, brought some much needed story and character development to an otherwise low bar humorous first-person shooter series.

New Tales from the Borderlands attempts to capture the same feeling from that game, now under Gearbox as its developer. And while the production values are certainly there and it could pass off as a Telltale game, I’m not sure the humor is quite there. Or maybe that comedic flavor just isn’t for me in the first place.

The new five-episode season is centered on three distinct protagonists: Fran, a down on her luck frozen yogurt shop owner with a little anger management problem, whose restaurant has been nearly razed by an intergalactic laser, Anu, a freshly fired brilliant yet all too anxious scientist, and her brother, Octavio, who’s best described as an complete glory-seeking moron.

There are also a few side characters who drop in from time to time, among them is LOU13, an assassin droid, who stars the game’s cover art. Somehow, the motley crew converge on planet Promethea, where the local company is getting taken over by a rival’s army, where boundless opportunities await.

Eventually, they run into a vault key, a coveted item in the Borderlands franchise that allows its user to gain entry in one of the vaults of legend, full of all kinds of treasure. But lo and behold, the only thing they manage to get out of it is a miracle rock with mysterious healing capabilities. And what would a group full of miscreants are likely to do with such a thing? Get rich, of course.

As you can probably tell, there are a lot of hijinks going on all throughout New Tales of Borderlands, and in true Borderlands fashion, it’s all really silly and over the top. And even though the effort of making a truly funny game is certainly appreciated, the overall experience in this one ends up a bit flat due to the long stretches of very limited to no amount of actual gameplay, with time only filled with otherwise unskippable cutscenes.

That’s not to say that New Tales from the Borderlands isn’t well made, as the production values are there to behold in the form of excellent voice work, character animation, and visuals. This surely got a way bigger budget than any Telltale game ever dreamed of having, but differently from one of those, New Tales from the Borderlands goes too far in one direction, where there just isn’t enough to do in it other than to watch its story unfold.

Surely, some of the character development can be good, like Fran dealing with past trauma, but on the other side of the coin, some flips on her own character are quite jarring. At times, it seems like writers just changed along the way, without no one consulting the other’s previous work.

And when you do get to do something, it’s usually very detached to what’s going on on screen. That happens way too often, moments where a cutscene would have sufficed with arbitrary controls popping up on screen in the form of quick time events. Makes for an interesting paradox since most of the time playing you’ll be spending just sitting and watching New Tales from the Borderlands unfold.

Then again, there are a couple of isolated and very clever tongue-in-cheek sections that managed to squeeze a chuckle or two out of me. One in particular, a nod to Metal Gear Solid, is silly and is over in a second, but there’s an entirely different HUD built just for it. Then there are the Vaultlander fights, where you’ll pit figures found all around the game against a particularly stubborn adversary that hounds you throughout New Tales from the Borderlands. They’re extremely simple and ridiculously easy, but at least serve to give some purpose to otherwise throwaway collectibles.

Fans of Borderlands looking for something else to play are bound to eat New Tales from the Borderlands up because it’s got more of what’s trademark to the series: the same all over the place humor, colorful characters, and very polished presentation. But for those looking for a revelatory experience that could sit among Telltale Games’ best efforts might find themselves disappointed by the game’s detached lack of interactivity and hit and miss comedy.