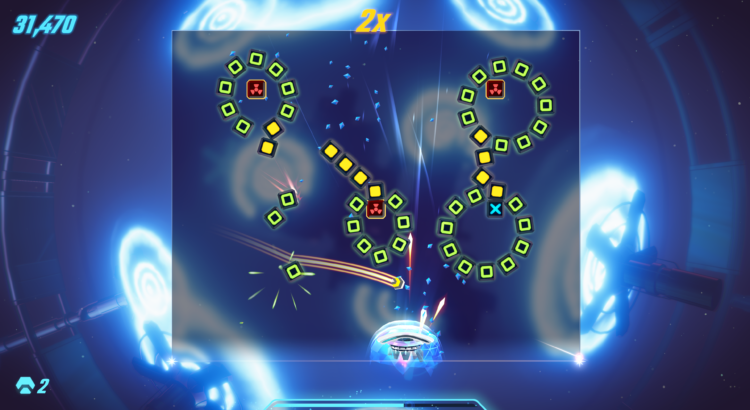 Arcade games are always tough to reinvent. The core of those games remains strong enough to still entertain even now, which makes any new take difficult to truly stand out apart from being another good version of whatever the original article was. In the case of brick-breaking games like Breakout and Arkanoid especially, there’s plenty of great games that play with the form, but few that ever really make a splash.

Shatter is an exception. Originally released in 2009 for the PlayStation 3, and now out on everything under the name Shatter Remastered Deluxe, Shatter is a Arkanoid-style game with one of the smartest tweaks these kinds of games have seen: the ability to alter the ball’s trajectory at will. The paddle is equipped with fans that can suck air inward or blow it outward, which enable it to influence where the ball will go more directly than just bouncing it off the paddle and hoping you angled it correctly to get the ball where you want it. This allows Shatter to create levels that require some precise maneuvers to clear.

That alone isn’t what makes Shatter great, of course: it’s how the game uses it. As you begin to destroy bricks, some start to float freely about the field. They’re subject to the same influence the paddle can exert as the ball itself is. Pushing or pulling the ball toward or away from you can also cause the bricks to do the same, either causing a wave of blocks to hurtle toward you or keep them nice and clustered on the far side of the arena ready to be broken one by one.

But you also want to be sucking in shards whenever you can as well. Every time a block breaks, they turn into shards that increase your score multiplier and build energy for you to use your shield (to keep debris from knocking the paddle out of the field temporarily) or to activate the “shard storm” ability to rapidly clear a stage or deal a ton of damage to a boss instantly. Trying to maximize your score and keep your energy filled while also not drawing a bunch of blocks your way and keeping an eye on the ball very quickly becomes a challenge to balance. Add power-ups that alter the ball’s properties (either being able to bust through blocks without being bounced back or make it much more maneuverable and therefore easy to manipulate, almost to a fault) and potential multi-ball shenanigans for even more points and Shatter can become nigh impossible to manage.

But Shatter also thrives in the chaos. You can play it like a standard game of Arkanoid, but really leaning into making the most of the game’s mechanics is where the fun really begins. Launching a second or third ball onto the field and watching them all go to town on the blocks before you, generating massive quantities of shards to suck in for that sweet multiplier, trying desperately to keep each ball active while avoiding the unmoored blocks likely hurtling toward you is thrilling as it is exhausting. The brick-breaking genre of games is generally a straightforward one (there’s only so much you can do with it), but Shatter remains a notable example that is unmatched even now.

This remaster hasn’t really changed much. The UI has seen some small tweaks and the game has now been upscaled to 4K and is able to run at 120 frames on PS5 and the Xbox Series consoles if you’re somehow rich enough to have a TV capable of doing that. Otherwise, it’s still the same game – which is good! Because Shatter is still a great videogame as is. In a time where games are frequently seeing full-scale remakes, often trying to replace the original works in the process, to see a classic come back out with only the smallest of changes made is welcome. And with the original game still readily available on Steam, Shatter Remastered Deluxe isn’t seeking to replace the original: it’s just an opportunity to bring the game back into the spotlight. If re-releases remain the best means to achieve that currently, then at least Shatter Remastered Deluxe takes the right approach.