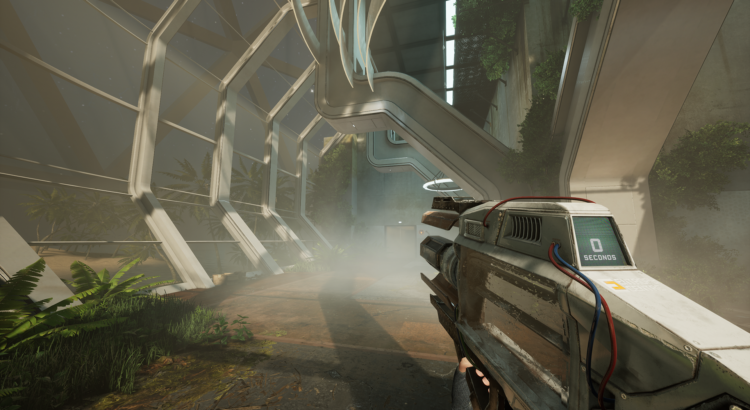 The Entropy Centre opens with the destruction of Earth – or so it seems, at first.

A walk down an otherworldly pathway, the Earth clearly in view above, is what you’re greeted with upon starting a new game. It’s a leisurely walk, the tone serene. Fragments of rooms and architecture hang suspended in the air off to the sides of the path. Then suddenly, the Earth explodes, engulfing the scene in bright white light before cutting to a room to someone waking up. Just a dream.

Aria is an employee for the eponymous Entropy Centre who wakes one day to find the facility deserted and in disrepair. Plants have begun to grow through the cracks as the building’s architecture stands in various states of decay. Nothing about the her surroundings suggest what happened or where everyone went. Terminals have e-mail inboxes open full of memos from management and conversations between workers. Not a single one hints at anything being out of the ordinary: it’s all just everyday work chatter. Left with no leads, Aria just goes about her job: solving puzzles. Joined by an AI named Astra residing in the portable entropy device she carries (which of course resembles a gun), they make their way through the complex hoping to figure out what happened.

The Entropy Centre is a puzzle game based around rewinding time, but only for specific objects. The device you use can only rewind objects up to thirty seconds in the past. Any time gained past that limit is effectively useless. Thirty seconds doesn’t sound like a lot, but it’s more than enough for the sorts of problems solving The Entropy Centre presents. The basic structure involves traversing the puzzle chamber and opening the exit. Very straightforward. If you’ve played just about any other first-person puzzle game in the past decade, you’ll be immediately familiar with The Entropy Centre.

Each set of puzzles introduces one new element at a time. Blocks to place on switches, jump pads to help you climb, laser grids that erase stored rewinds, laser blocks that activate switches, bridge blocks that let you cross gaps or create pathways, conveyor belts to build momentum off of or transport other items, gates that can transform any block into another type, etc. The pieces are varied and the ways they’re used are equally so. Though each set of levels only has so many puzzles (usually around five or so), each one explores each new variable well enough to understand the basics while still leaving plenty of room for new ideas as the pieces start being mixed and matched.

The difficulty of the puzzles often comes less from the puzzles themselves and more the difficulty of keeping the order of operations straight. Everything has to be set so that you can rewind all the pieces into place, meaning you have to think about everything in reverse. That may not sound difficult on paper, but it’s actually quite challenging given how many pieces you can be juggling. I was often able to figure out what I had to do pretty quickly, but I regularly got stuck on some of the particulars of how to do it.

A seemingly simple problem would inevitably become complicated as I ran into roadblocks regarding how to get a cube where I needed it without going over the thirty seconds of rewind time I’m allowed. The exact route I needed to take to get everything into place seemed doable, but something would get in the way. More often than not, it turned out the solution I was pursuing was more complex than the intended one that was sitting in front of me the entire time.

Almost every time I was stumped, it was because I was overthinking things and not seeing how simple the actual solution was. I got so caught up in the intricacy of the puzzle itself that I assumed the solution would be just as involved. Part of this is just inherent to myself when playing puzzle games (I have a bad habit of overthinking everything), but it’s also just a consequence of dealing with time manipulation of any sort. Even the most seemingly unremarkable puzzle can become more difficult once time manipulation comes into play. Tends to complicate everything by default.

It does lead to plenty of fun “eureka!” moments as things finally click into place. Realizing I was stuck only because I forgot about a specific way I could rewind something should make me feel foolish, but often I was just pleasantly surprised by how often it felt more like I was gaining a better understanding of the mechanics. Especially when, in at least a couple of cases, it felt like I was lead to solutions that maybe weren’t the intended way to solve a puzzle (one involved jumping off a wall to reach the exit instead of using the actual pieces to do so), but still worked anyway, which is always fun.

The Entropy Centre isn’t just a puzzle game, though. There are moments where you’re forced to engage with a light form of combat and scenes where you need to quickly navigate a room that is falling apart all around you. Its attempt at combat is… fine insofar as it’s quick and doesn’t get in the way. It’s just a matter of rewinding the projectiles that are fired at you. The bigger set-piece moments work better since you’re just doing what you usually do but at a faster pace than usual. There isn’t much actual tension present since you can very easily catch crumbling pieces of level architecture just as it begins to fall, but they do succeed in creating the general sense of urgency they invoke.

Eventually there comes a point where it’s found the Earth is indeed rapidly falling apart due to some unknown event, prompting a mad dash to power the main entropy device to rewind the earth once more. The conceit behind the facility is to build entropy energy by solving puzzles to power the main entropy device so that Earth can be rewound to avert whatever disaster has befallen it (in this case, the planet literally exploding). The effects of numerous natural disasters have been reduced greatly and even some extinction events have been averted entirely.

By the time the game starts, the Earth has been rewound countless times, each one successfully allowing the world to change course to avoid whatever event required the rewind in the first place. The idea of being able to rewind the Earth to properly avoid catastrophe is an appealing prospect. That we could theoretically go back far enough to take stronger measures to fight climate change sooner would do wonders. But what would rewinding the Earth do to it in the long term? Surely there must be a cost. While The Entropy Centre is careful to steer clear of specifics, the game isn’t shy about hinting toward something bigger being responsible for the current apocalyptic event and how it relates to why the facility is now deserted.

The Entropy Centre doesn’t dwell too much on the story, though. While the slow reveal of what’s going on is delivered well and the growing friendship between Aria and Astra works and is fun to watch, it’s much more focused on being a great puzzle game first and foremost, which it is unequivocally a success at. The Entropy Centre‘s light use of time manipulation serves as the basis for some clever and satisfying puzzles, easily putting it among some of the best of the genre.