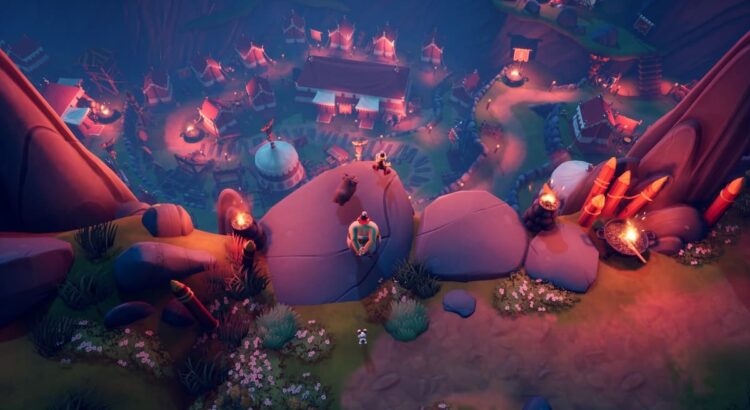 Asterix & Obelix XXXL: The Ram From Hibernia from OSome Studio and Microids is the latest in a long line of games based on the massively popular comic strip where a lone Gaul village is the only thing left in the way of the Roman Empire’s conquest of taking over Europe. Sadly for fans of the source material like me, there’s very little to actually enjoy about the newest entry in the Asterix & Obelix XX series as The Ram From Hibernia happens to be one of the weakest I’ve played so far.

The game opens with an amazing discovery: yet another village somewhere in the coast has also been resisting the Romans, an isolated island far across from Gaul, Hibernia (ancient Ireland). The secret to their success, though, doesn’t lie with a potion, but in the chieftain’s pet ram, whose golden horns give the people some manner of inspiration to keep the fight going. Unfortunately for them, Caesar’s cunning minions kidnap the hapless fluff ball, forcing the chief’s daughter to seek the help of Asterix and co before it’s too late.

Who else other than peppy Asterix and the mighty Obelix to save the day? Don’t forget about the adorable pup Ideafix, who would never leave his master’s side. Asterix & Obelix XXXL: The Ram From Hibernia can be played in both single player and co-op. There’s hardly a difference when it comes to who you choose to play with, really, as both have basically the same set of skills, with the only real big catch that Obelix can use his trademark menires as weapons, while Asterix’s light weight allows him to reach certain platforms Obelix is too big-boned for.

The big issue with Asterix & Obelix XXXL is that it feels like an incomplete game. It being mostly a brawler, the hit-detection would be a welcome feature if it worked at all like it should, which isn’t the case here. That’s due to a few omissions when it comes to the sound effects and animation, which are nowhere to be found when pounding your way through legionnaires unhappily standing in your way all across the game. They just decide when they’ve had enough and disappear out of thin air when you “defeat” them.

The same can be said about other aspects of playing the game, like platforming, which works only when it wants to and is totally random when you’re trying to deal with particularly tricky timing, not to mention that the camera also tends to have a life of its own and it’s certainly not there to help you in any way. Enemies have a nasty tendency to join forces with it, hiding along the borders of the screen especially when the main objective is to clear the stage of them in the first place, which tends to be the case quite often.

At specific times during Asterix & Obelix XXXL, it’ll have you invade Roman camps and clear them out. They’re timed sections that at the end tally up your score in order to put it against whoever you might happen to be playing with, or if you’re solo, well, you can keep repeating it in order to get a better score. But honestly, why would you? They take way too long to finish and are where the aforementioned problems tend to creep up the most.

There are a number of collectibles to find in every stage, but due to the game’s lack of any audible or visual pop-ups when you discover one and their knack of being hidden off of the beaten path inside bushes for instance, you’ll have a hard time knowing how many you have or are left. And same with the high score sections, why go through the effort if Asterix & Obelix XXXL seemingly doesn’t even bother to help you keep track of your collection in the first place?

Outside of the many problems with gameplay, Asterix & Obelix XXXL: The Ram From Hibernia is an otherwise close to decent looking Asterix game. On the Switch, though, it can be a little blurry at times, and it doesn’t come close to holding a candle to the beautiful 2D graphics of the previous one that I tested, Asterix & Obelix: Slap Them All!. It’s just a shame that it’s so rickety in every other department, because there’s a cute little story in the vein of the comic to be found, and the writing is definitely on the same page humor-wise.

Even die-hard fans of the comic books should look elsewhere if they’re in the market for an Asterix game as Asterix & Obelix XXXL: The Ram From Hibernia just isn’t worth it. If you were to pick one of those up, I would probably point you to an earlier entry in the series, Asterix & Obelix XXL2: Mission Las Vegum, which was recently re-released on Switch and is all-around a much more well put together and fun game.