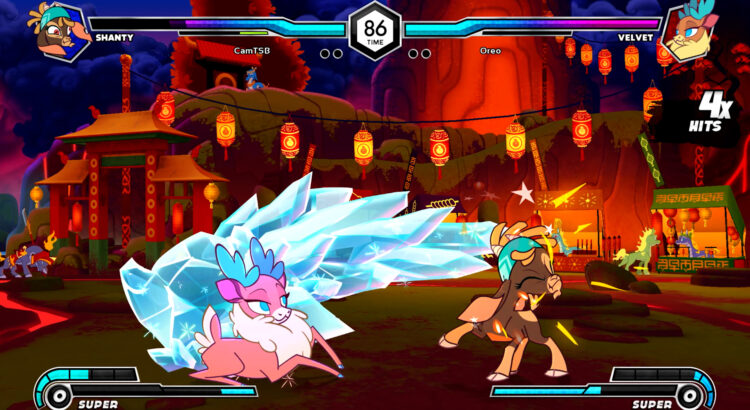 Fighting games are a genre whose mindshare is largely taken up by games from massive studios. Games from Capcom, Arc System Works, Bandai Namco, Nintendo, SNK, and Netherrealm, both new and old, are often the ones you can most reliably find someone to play against and regularly headline, or at least frequently make appearances at, tournaments. It’s a space that’s difficult to find a foothold in because of how dedicated people become to their game of choice (myself included).

Occasionally something breaks through and hits it big – or at least does well enough to comfortably sustain itself. Them’s Fightin’ Herds is one such game. It’s been kicking around for a while since launching on Steam in Early Access some years back (and hitting 1.0 in 2020), and has now made its way to consoles with full cross platform play in tow. It’s never quite been the biggest game in general fighting game circles, but it’s done very well for itself and continues to thrive. And it’s not hard to see why. As the team’s first game, it’s remarkably well-designed.

Them’s Fightin’ Herds leans a bit more on the technical side of fighting games. While play primarily revolves around fundamental concepts instead of unique game systems heavily influencing play (like in most ArcSys games), it can be quite demanding if you choose to engage with it. It is, on the whole, pretty approachable, however. It’s a four-button game, for one. You have your basic light, medium, and strong attacks, and a dedicated button for character-specific mechanics that use the “magic” meter. Attacks chain together in the standard fashion: light > medium > strong > special.

Each character has their own idiosyncrasies regarding some of the specifics of their combo theory (such as being able to cancel one special attack into another, or being able to cancel attacks into an air-dash and then cancel that into another attack), but the basic rules are universal. So much so that the game helpfully lists a couple very basic combos that every character can do right alongside the characters’ move-lists – and the basic controls – so that you always have something easy to reference regardless of who you play.

It doesn’t take the same measures as Granblue Fantasy: Versus or DNF Duel by reducing the complexity of inputs for special attacks (the traditional quarter-circle and half-circle motions are here in full effect), nor does it have an auto-combo system like Melty Blood: Type Lumina or Persona 4 Arena, which gives it a slight learning curve if you aren’t already familiar with fighting games since you can’t just hop in and mash buttons to make cool stuff happen. It’s easy enough to string basic attacks together, though. Execution only becomes demanding once you start trying to learn more advanced combos.

It does have its own idea for reducing complexity slightly, however. By pressing and then holding a button – let’s say, a strong attack for example – you can perform the motion for a special (quarter-circle forward, for instance) and then release the button to execute it instead of having to press that same button again. Traditionally this is known as a “negative edge” input, where holding and releasing an attack does something different than just tapping it would. Here, however, it’s just an alternate way to perform special attacks. It feels weird at first, and is hardly a replacement for more direct means of simplifying input complexity, but it is something.

Defense is where things start to get a little trickier. For as much as it largely can be reductively boiled down to just blocking attacks and being ready to counter throws, the actual defense mechanics require some finesse. In addition to regular blocking you have: Instant blocks, which are just a better version of blocking that requires some risk on your part since you need to time when you hold back correctly for it to work, but it allows you to act faster and puts your opponent in a longer state of recovery if successful. If you’ve played just about any Arc System Works release, you’ve probably played a game with a similar system.

There’s also pushblocks, which you can do by pressing any two buttons while blocking at any time to give you some space to work with and, ideally, make the opponent’s attack whiff, but the pushblock itself can also backfire if you aren’t careful by giving the opponent a chance to catch you during recovery. And lastly, “Cross-Canter” sends the opponent flying to force a reset to neutral in exchange for half a bar of your super meter. Think of it like Guard Thrust from Under Night In-Birth or V-Reversals from Street Fighter 5 in that it is a powerful option to force your opponent off of you, but one that requires you to spend resources and is largely situational.

Resource management is similarly important. Apart from the magic meter, which is character-specific in terms of how much you get and how its used, the super meter is the main resource you’re having to keep an eye on. Whatever you’ve built up over the course of the match carries over between rounds, so careful use is key. How many bars you’ve built up dictates how you can spend it. One bar allows you to use your character’s super, which is just a very powerful attack you can tack on to just about any combo for increased damage.

Spending two bars allows you to follow-up the basic super with an additional attack that has utility such as inflicting a status effect, a temporary power-up that makes you stronger and changes some move properties, or summons some help to further enhance that character’s offense for a brief period. Spending all three bars allows you to use an extra powerful attack that launches into a brief cinematic on hit, but often can be difficult to actually set up due to the cost.

A lot of strategy comes into play around managing “juggle decay.” Juggle decay is basically Them’s Fightin’ Herds‘ means of preventing infinite combos from happening. The longer the combo, the harder it is for you to keep your opponent airborne (and therefore “juggle”). Unless you end your combo with a move that will put them into a knockdown state, they’ll likely be able to escape and recover fast enough to score a hit against you instead.

The strategic layer comes from how you can leverage juggle decay to your advantage. Long combos may deal great damage, but it also means you’ll be likely locking yourself out of being able to run a particular setup on knockdown and they’ll be gaining way more meter while you’ll be gaining less as the combo goes on. Short combos may not deal as much damage, but it does mean you can gain meter quickly while keeping your opponent from doing the same and gives you opportunity to run mix-ups against them.

It’s a smart system because it creates strategy around combo length. In most fighting games, the strategy around combos comes from what you’re looking to get out of what route you use. Are you just looking to maximize damage, trying to go into a specific setup you can loop, or just push them to the corner faster? The decision making there matters, but it’s relatively straightforward in most cases. Them’s Fightin’ Herds provides some extra tactical considerations there. It illustrates how strong its system mechanics are that even something intended to limit the length of combos can instead become a core point of strategy.

The tutorial is very well put together. It covers all the basics of fighting games and covers what each character can do and how they differ. It even goes so far as to explain what frame data is and how to understand it, which is useful given how the game makes that info readily available in-game via training mode (as should be standard in every fighting game; makes it easier to collate info onto wikis and the like). It’s about as good as you could hope for a modern fighting game tutorial to be.

The online is similarly stellar. The game was already built with rollback in mind, so matches are smooth even across vast distances. It helpfully suggests what range the rollback frames should be set to based on the current ping before accepting a match (Them’s Fightin’ Herds lets you set that value manually instead of handling all that automatically), so you can make sure matches will run smoothly. Even better, all the matches I tried in cross-play had no noticeable difference.

You can queue for matchmaking to find games in the background (such as while doing some practice in training mode), but the servers, known as pixel lobbies, tend to be where all the activity is. They’re effectively similar to Guilty Gear Strive‘s parks in that they are hubs where you can roam around as a pixel avatar you can customize slightly to find games in. Where Strive‘s lobbies can be a bit unintuitive in spots (I still often forget how to spectate matches in private lobbies while also getting in line for matches), here you just walk up to someone, press a button, and choose what you want to do.

With the addition of cross-play, Them’s Fightin’ Herds‘ console debut makes an already great game even better. As more and more games steadily adopt that standard, for fighting games especially, it becomes easier and easier to grow and keep a community alive since there’s no worrying over which platform is the most populated, as has so often been the case for many fighting games over the years. Them’s Fightin’ Herds has already been getting by just fine, but now, so many more avenues to play, it’ll hopefully be able to thrive even more.