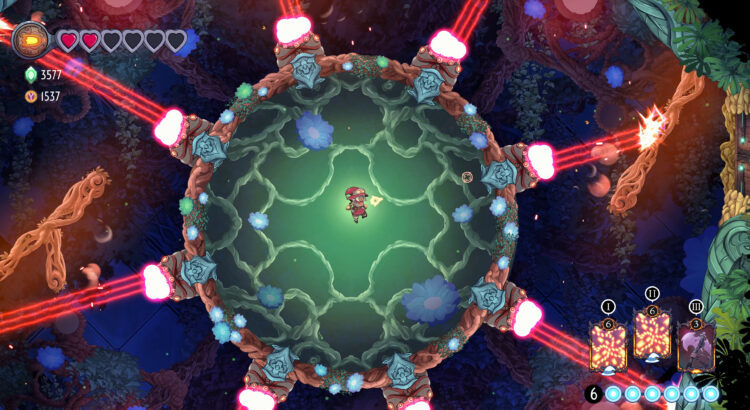 The Knight Witch is an interesting case. It’s a game that plays in the space of shoot-’em-ups – the sort of shooters that are traditionally played on a vertical or horizontal auto-scrolling field – but ties it into a more exploratory game that, far as I can tell, nails its goals on a mechanical level. Only I can’t get the hang of it at all for some reason.

The Knight Witch is a shoot-’em-up meets metroidvania. The metroidvania design is light, usually amounting to gating optional items and upgrades behind abilities you’ll gain later as the game’s world is divided into individual zones that are locked off from one another. Its biggest impact is in how level design influences combat dynamics. As a more exploratory game, you’re flying through winding cave systems that often don’t provide a whole lot of room to maneuver. The Knight Witch accounts for this by keeping enemy numbers low outside of major encounters to ensure you don’t become overwhelmed. It’s a game that seems to understand the challenges inherent to merging these genres together and takes the necessary steps to avoid the obvious pitfalls.

That said, I’ve found combat to be a struggle anyway because I can’t keep up with what’s happening on screen. Just about every death has come about because I couldn’t see what was coming. No matter how aware I was of my surroundings and of my position relative to the clusters of enemy bullets hurtling toward me I would inevitably be unable to avoid them. That might not seem like too big of a deal on paper, but shoot-’em-ups by design are games that tend to be built around being able to carefully navigate around the streams of bullets fired upon you. It’s why the genre works. And The Knight Witch seems to understand this well. Combat can be chaotic, but it’s usually careful not to go so far as to be overwhelming. But even during the more sedate encounters, I struggle to keep an eye on everything. I can’t pinpoint why that is, but it’s a constant problem.

At first I figured it might just be a problem of trying to aim my shots while also trying to keep an eye on enemy fire (it’s effectively a twin-stick shooter in that regard). The game lets you hold down the button you use to shoot and will automatically target the nearest foe, however, so that was ruled out quickly as it didn’t ultimately fix the issue. Even with auto-aim taking over, I was still unable to keep up, taking dozens of hits I should have been able to see coming. Thought it might be that the camera is constantly moving to keep you in the center of the screen when possible, but that was quickly disproven by enough encounters where the camera is locked in place and I still couldn’t keep up. It’s definitely not a matter of the game throwing too much at once like Rive was prone to doing, either, given how few and far between those moments are. So what is it?

I’ve been trying to figure it out and I’m at a loss. Can’t tell if it’s something with the game itself, if it’s entirely on myself, or what. Regardless, it’s made trying to play The Knight Witch difficult. It all came to a head when I was stuck on one room for a couple of hours because of this very problem. The specific encounter had me in a submarine because the area had been flooded. This meant I could only shoot in the direction I was facing (either left or right). On paper, it’s a little easier because I didn’t have an entire 360 degrees worth of angles to cover. The encounter was an ambush, which is where The Knight Witch pits you against waves of enemies in a small arena, so I knew going in it was going to be difficult. But something about this particular encounter exacerbated the issue.

No matter how many times I tried it, despite knowing the exact order things were going to spawn and when, I could not keep up. Repetition is often part of the game in shoot-’em-ups, traditionally, but here it didn’t make any difference. Every time I would always be hit by enough stray bullets I simply could not see that I would die at roughly the same spot every time. This encounter was a more extreme case, granted, but it was also the peak of my frustration. A couple hours worth of attempts with zero progress or understanding of what I could be doing better can go on for so long.

It’s annoying because I don’t know if it’s just me or the game or what. I can’t figure it out. I want to like the game because the mechanical premise sounds right up my alley, but something is just not clicking. I wish I knew what it was so I could at least understand why things played out this way.