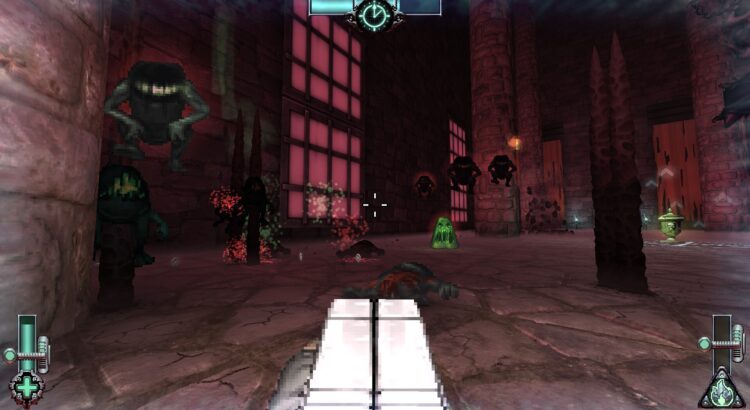 Good things can come in small packages, and so it is with Impaler. Written in C as a solo weekend project by developer Aaron Geisler, this microgame is possibly the smallest entry yet in the current wave of old school shooters. The action plays out in just a single gothic chamber, in which the player tackles ten waves of enemies culminating in a boss. Impaler makes a virtue of its simplicity and brevity. Given that even a full run will take only around thirty minutes, it’s an ideal lunch break experience.

While Geisler’s game is very straightforward, it has enough clever kinks in the formula to sustain interest. One is right there in the title; at any time, the player can cause a magical spike to explode out of the floor. Most obviously, this can be used to pierce through enemies. Weaker ones will be killed instantly, and left to gruesomely slide down the spike. They will also drop a small health pickup. More stylishly, players can also use the spike to propel themselves harmlessly up into the air, all the better to then crash down onto foes.

Soon then, Impaler becomes a kind of dance, alternating between using a gun and deploying the magic spike. Guns particularly come into their own when dealing with enemies who are largely immune to impalement, either because they can fly or because they ride a tall column up into the chamber’s lofty reaches.

Impaler is also a roguelite, and so brings to mind earlier games like Ziggurat. At the end of each wave, a new upgrade can be purchased from a choice of two. These might improve a gun’s fire rate, enhance the damage dealt by the spike, or increase the health awarded at the end of a wave, to give just three examples. The coins dropped by enemies last only a few seconds, which adds another dimension to the player’s second-to-second decisions about where to be in the room.

This simple but engaging formula works very smoothly. Reaching certain milestones unlocks new weapons, encouraging more runs in which more upgrades can be discovered and experimented with. There are a number of wave variants, which keep things interesting. Sometimes, for example, the player will have to push large urns into specific locations to gather coins, all while under fire. Obstructions often spawn in, complicating movement patterns – but these can be destroyed with the right firepower, to open up new paths.

Impaler is a game built for short play sessions. Over longer periods, its stark simplicity can’t compete with other retro-style shooters. Clearly, though, it doesn’t need to. The game’s small price and tiny install footprint make it a proposition that is hard to turn down, and easy to keep around for whenever the right mood takes hold. In that sense, Impaler occupies a specific and worthwhile niche in the retro shooter ecosystem – high praise in these crowded times for the genre.