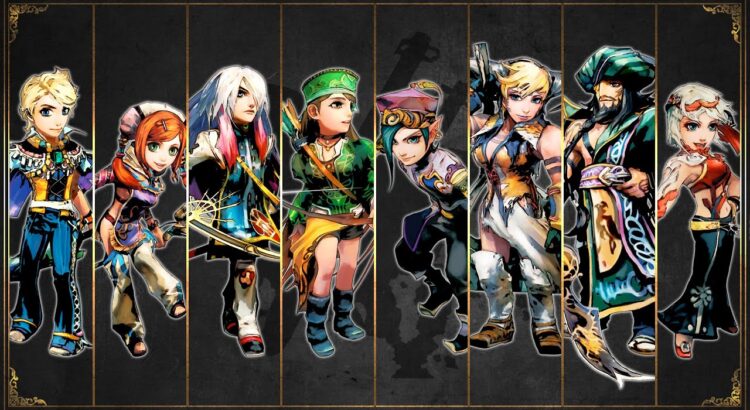 Created by famed Japanese JRPG designer Akitoshi Kawazu in 1992, the SaGa franchise has been a quiet staple in games for generations. Outside of Japan, it’s seen relative success, but most players might be more familiar with it thanks to releases that aren’t directly related to the SaGa name. The Final Fantasy Legend were originally SaGa games, but due to the growing popularity of Final Fantasy in Western territories, at the time Squaresoft decided to rename them in order to bask in a much stronger brand.

Later on, SaGa games finally showed up on our shores with their name intact, and for the purposes of this review, we’ll be talking about the very first one canonically in the series, which was released in 2005 for the PlayStation 2 as Romancing SaGa: Minstrel Song. With much improved graphics, sound, and including, of course, a localization, it was the first attempt at introducing SaGa as SaGa to an outside audience. Through its quirky gameplay, it could definitely be put among the more niche of JRPGs on Sony’s console at the time.

With Square-Enix’s growing effort at porting a whole bunch of SaGa over the last few years, Romancing SaGa: Minstrel Song’s turn at the bat, with a “remaster” that includes the original, a re-release of the very first SaGa Super Famicom game, and some new content added in. Sadly, before this release, I had zero experience playing a SaGa game, let alone Romancing SaGa, so I’m not qualified to talk about what’s new exactly this time around, but I’m more than happy to go on about the overall quality of the complete package.

For starters, Romancing SaGa: Minstrel Song Remastered isn’t at all like your usual Square-Enix JRPG. You don’t jump into a story per se, nor are you introduced to predetermined characters with backstories or whatnot. No, instead you get to pick from 8 distinct archetypes and get dropped into the game world without much in the way of an introduction. In my case, as a warrior, I started out my adventure in a remote little village in the icy wastes of Valhalla, of all places.

But that’s just the tip of the proverbial iceberg. Combat in this JRPG is also different, but not at the outset. Sure, you fight in turned-based battles, but you don’t exactly level up. It all works around a point system where you have a certain number of them for every attack type at your disposal – their variety strictly tied to your character’s class – and the degradation that each weapon you’re holding.

Like any RPG, though, HP is at a premium in Romancing SaGa. You’ll still drop dead if it runs out, and in all honesty, the lack of a level up system of any kind isn’t much of an obstacle when playing this. The ridiculous starting difficulty just might, and since there’s no indication whatsoever that you can put together a party, it’s easy to simply head off on your first quest by your lonesome and get absolutely trounced by the opposition.

Then again, it seems like the developers in the remaster are very aware of that initial hump since whenever you hit the dust, you come back at a checkpoint right before engaging the enemy that offed you, giving you another go at them or a chance to run back if needed. This makes the game much more playable, even if it doesn’t do much in making it any easier or friendly. Then again, if my research into the franchise is to be believed, the SaGa games have always been this way, keen on giving you enough leeway to either really engage with its open-ended gameplay or keep you away from the game altogether.

If you stick to it, there’s a substantial traditional retro JRPG experience to be had with Romancing SaGa: Minstrel Song.  This being my first foray into the series, I was surprised with just how much the designers of the game invested on making it a very worthwhile game that rewards you for your own drive to explore it rather than simply throw out everything it has going for it right out the gate, like most modern RPGs.

In the way its progression is put together, not making use of any sort of leveling up, Minstrel Song instead opts to having you mold the world that it takes place in instead of your character, in a way. You’re able to pick up and complete a number of quests as you tiptoe around the game world, and some of them come with stricter time limits than others, so it’s entirely up to you how to tackle them, if at all.

Due to that, this is the sort of game that for completionists is perfect for play with a guide at their side due to all the permutations when it comes to what should or shouldn’t be completed. Then again, if you do decide to go at it relying only on your wits like me, you’re also welcome to it, and it’s still an enjoyable romp that’s very unique from the garden variety RPGs available on the Switch eShop.

Given its age, it was great to see how well Romancing Saga: Minstrel Song made the transition to the Switch. Graphics aren’t all that beautiful, but they look sharp and smooth enough not to get in the way of the action. The visual presentation as a whole is very much of the time that the game was released originally, with basic low poly “chibified” characters running around stark environments. On the other hand, almost every single line of dialog is voice acted, which was a neat treat.

If you’re on the market for a different sort of JRPG and don’t mind having to do some digging in order to enjoy a real diamond in the rough, you really can’t go wrong with Romancing SaGa: Minstrel Song Remastered. It’s the sort of game that might just catch you off guard and by the time you realize it, you’ll be so enraptured by its spell that you’ll have no choice but to see it through to the end. It’s quite a ride.