During the 1990s, in his column for The Mail on Sunday, author Bill Bryson once remarked “There are things you just can’t do in life. You can’t beat the phone company, you can’t make a waiter see you until he’s ready to see you, and you can’t go home again.” Whilst his comment was mainly meant in jest, there is a certain truth to the remark that you can’t go home again.

Home is a peculiar concept that is difficult to pin down; it’s a place which is special for everyone and yet nobody really thinks of home in the same way. Once you’ve left your childhood home and moved into a new one, your original home somehow feels different, even foreign. After all, it’s no longer your “home”. Gone Home is a singular video game experience which explores this and other themes in a dynamic, intuitive and thoughtful way. Whilst many players will inevitably find the gameplay aspects lacking, Gone Home is a masterpiece of environmental storytelling which manages to weave an involving story by using purely in-game clues. 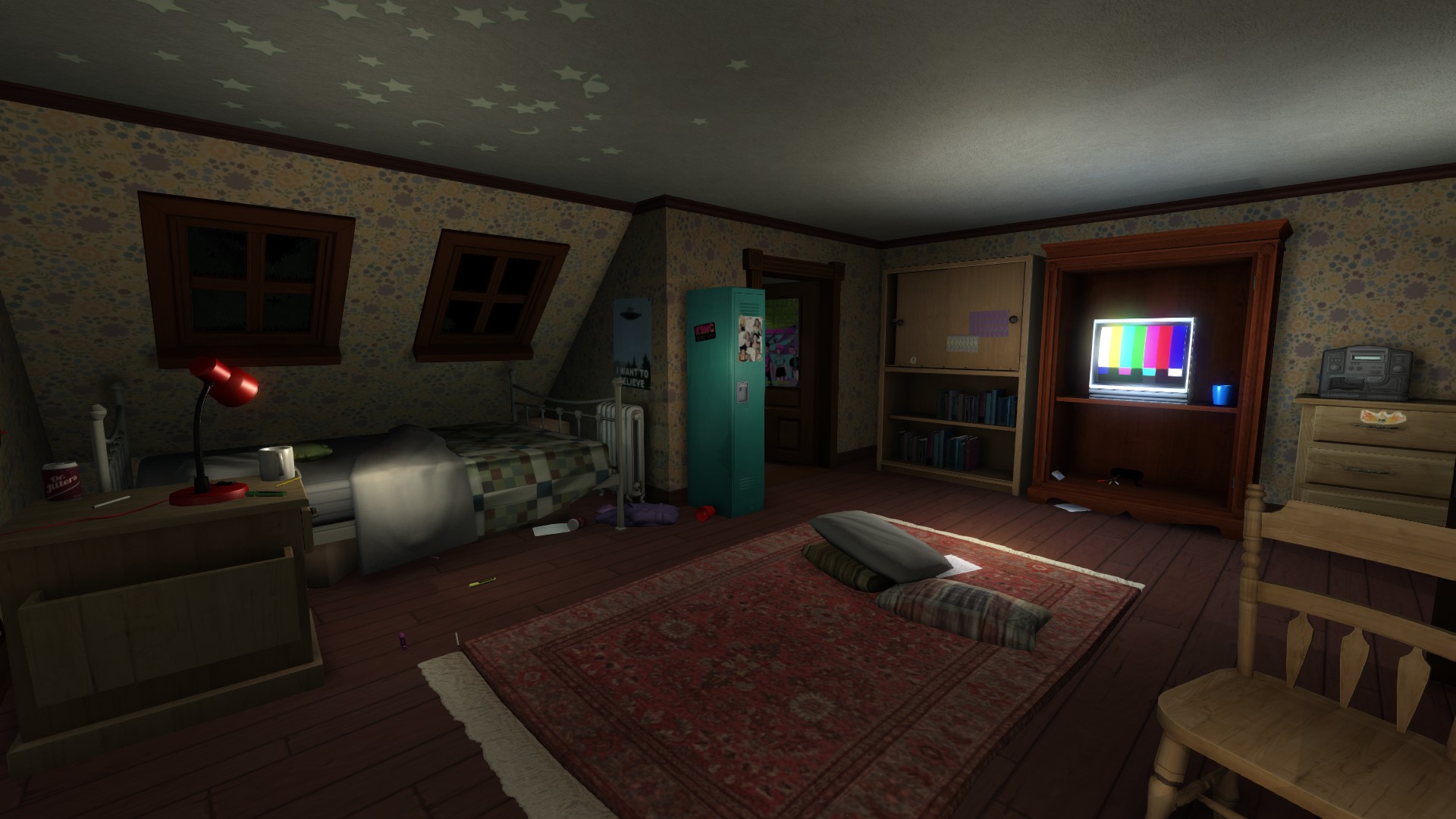 The setup of Gone Home is remarkably basic. You are Kaitlin Greenbriar, a 19-year-old who has just returned from a year’s travelling in Europe to her family home in Oregon. Whilst you were away, your family have moved into a new, rather sinister-looking house at 1 Arbor Hill, previously owned by your father’s uncle, Oscar Masan. You show up on the doorstop fresh from the airport early in the morning on 7th June 1995, but bizarrely, nobody’s there. The house is deserted.

From here onward, the game is essentially a detective story with you as the investigator. You walk and explore the house, examining the rooms and their contents for clues as to where your family are. The primary story follows the exploits of your younger sister Sam and her relationship with another girl, Lonnie. The storyline is handled very maturely and emotively; every so often when you read a key clue a voiceover diary from Sam plays, which helps to give her character depth and wonderfully brings her to life. Very few games have dealt with the emotional concepts Gone Home investigates and it is to the game’s credit that it never feels heavy-handed in doing so. If you dig deeper, there are also a number of sub-plots simmering beneath the surface which give additional depth to the Greenbriar family.

There isn’t much to gameplay besides wandering around the house, opening cupboards and doors, and examining the contents within. The most “gamey” aspect is finding one or two essential items needed to progress such as a certain key, or discovering the codes for a couple of safes. The joy comes from looking at the high resolution items, including letters, scrawled notes, printed pages, manuals, and magazines. Many of these have been scanned from actual handwriting which means that you can come to recognize characters by their writing style. Terry Greenbriar (Katie’s dad) writes in block capitals, whilst your mother Jan’s friend Carol writes her letters on pink-flowery notepaper. 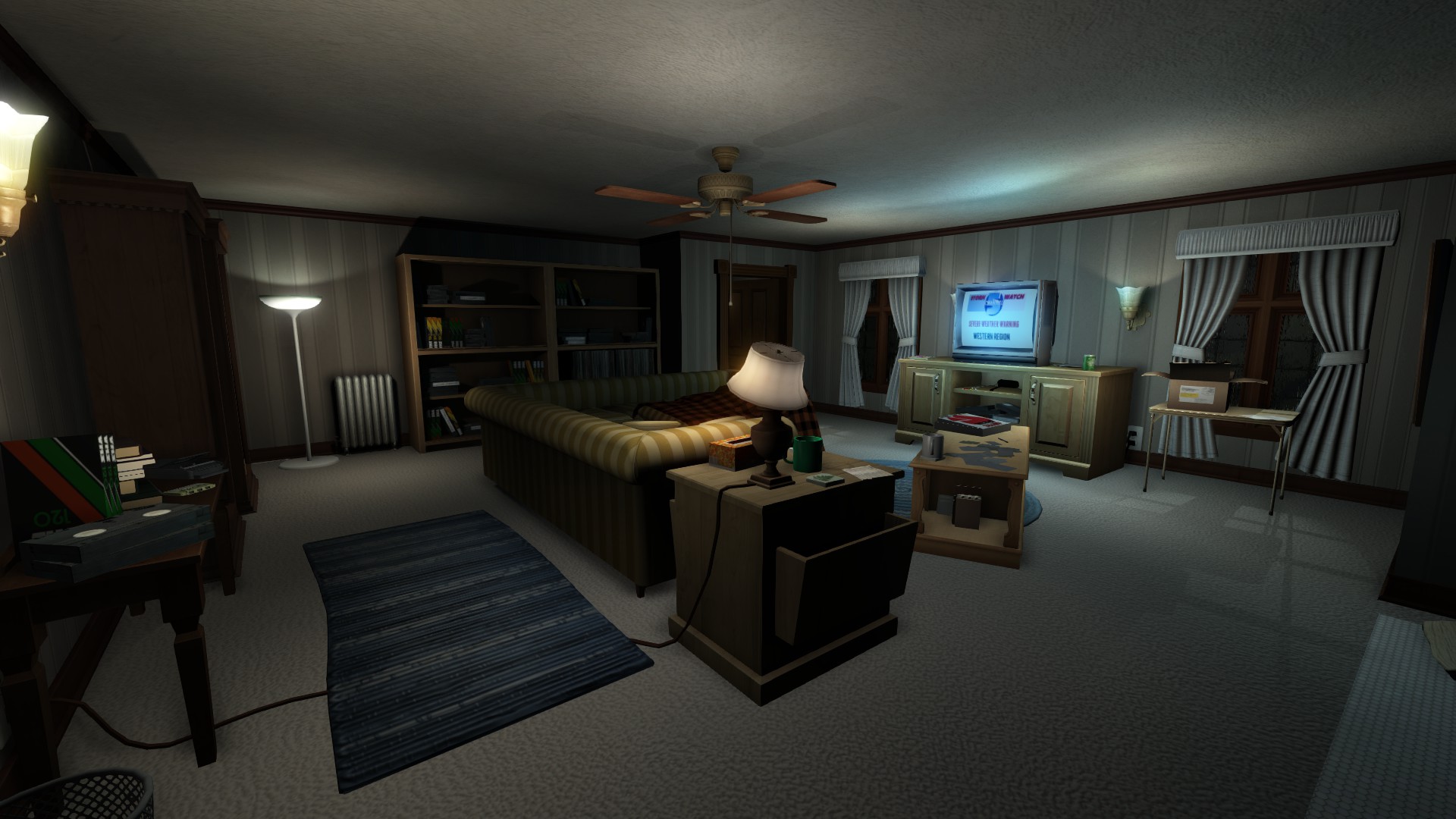 There are also a plethora of non-interesting items that can be picked up and manipulated, including pens, cups, plates, coasters and other household detritus. All of these help to add colour to the world and the game has a nice feature where picked up items will snap back to their original positions if desired, so you don’t make the house more untidy than it already is.

It is unfortunate that there are a few aspects of the storyline that don’t work quite as well. It’s established that your family has been in 1 Arbor Hill for almost a whole year, but in most rooms you’ll still find unopened moving boxes piled haphazardly as though they’d moved in only very recently, which I found rather bizarre. Whilst you learn a lot about the rest of your family, their emotions and their dark secrets, your own player-character of Katie is essentially a blank canvas that besides a few postcards scattered around the house remains remarkably absent from any character building. You may also need to get over the logical hurdle of why many secret and personal documents your family would probably never want you to read are spread so brazenly about in plain view, often on tables or in bookcases.

There is also a bit of an atmospheric mismatch at work; Arbor Hill is appropriately called “The Psycho House” by Sam’s classmates and it is a distinctly creepy house with long corridors, flickering lights a creaking floors. Despite this and the fact that the game is set during a thunderstorm, Gone Home is most pointedly not a horror game in any form. The setting leaves you constantly on edge though, as does the anticipation of what might be waiting for you in unlit rooms or locked in the attic. This kind of does the game a disservice because the house never feels alive, welcoming or even particularly homely, despite it being packed with a huge array of the Greenbriars’ personal items.

The setting distances you, and by extension Katie, from your family, as does the fact that you’ve been away for a year and have never set foot in the house before. It is, quite patently, not your home because Katie has never actually lived there. Perhaps this was a narrative objective, to demonstrate how isolated and out-of-contact Katie has become, but nonetheless it feels unnatural. There are also half a dozen cassette tapes dotted around the house of indie Punk Rock from the mid-90s, which can be played on conveniently placed recorders. The loud Punk cuts through the foreboding atmosphere of the house so abruptly I most often took the tapes out again a second after putting them in. Children of the 1990s will particularly enjoy reading the spines of many VHS tapes in many cupboards to see what films the family has been watching.

Gone Home is truly something new, in that it is a game of pure story and almost zero mechanics. If you don’t invest your time to properly reading through the letters and pages around the house, the game will very quickly feel dull. Diligent players, however, will be rewarded greatly with a good deal thoughtful insight into the lives of the Greenbriar family, coupled together with an emotional, sweet story. Gone Home doesn’t take you home, but it does get close.