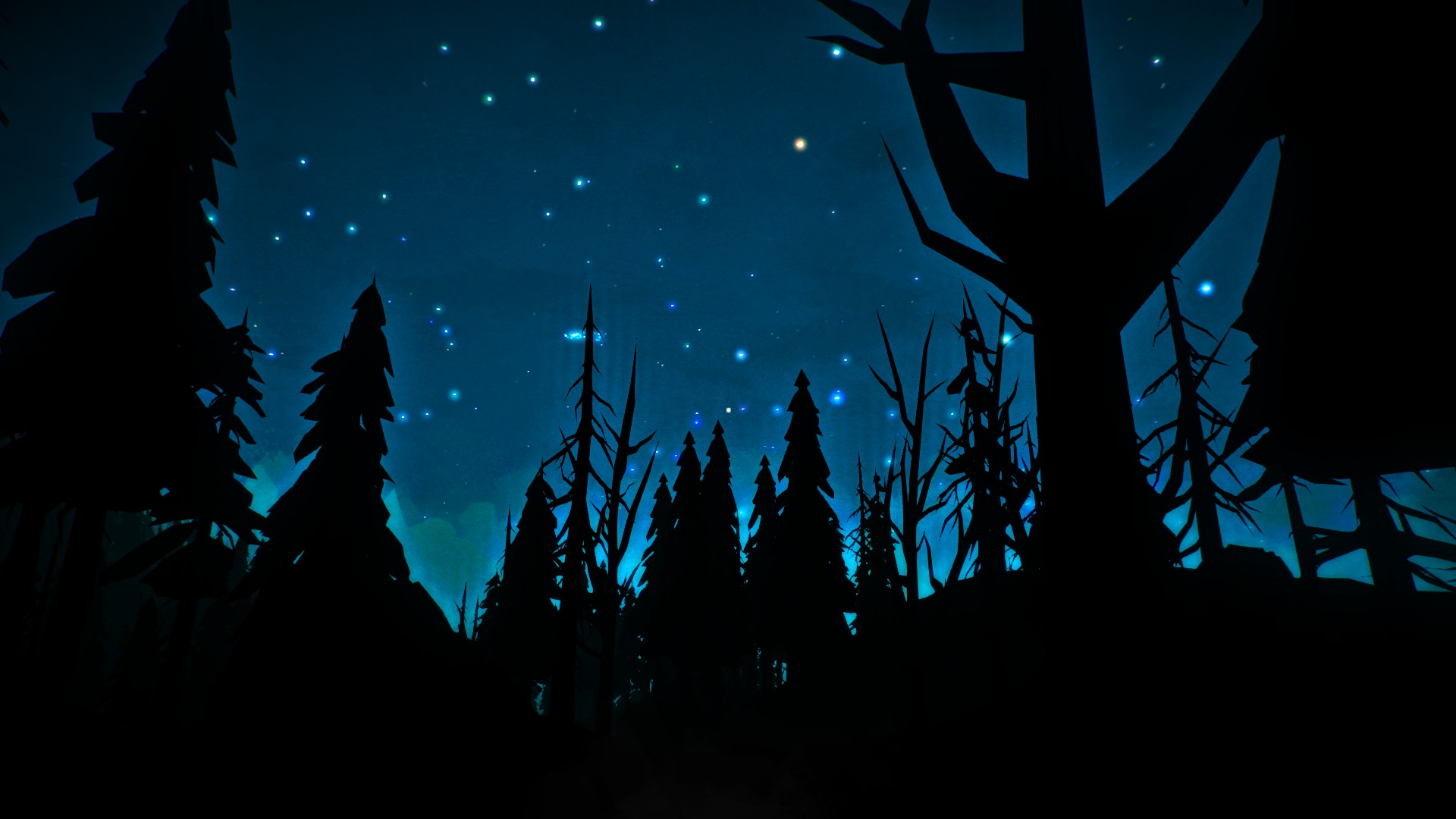 The above screenshot was taken around 4 am in-game time. I’d just found shelter after being forced to retreat due to nearly catching the attention of a wolf. It was a small bunkhouse at the end of a path lined with log fence posts. There were barely any supplies, nor any place to make a fire; just a series of bunk beds. The sun was already setting, and since I didn’t have a lantern, sleeping till morning seemed like the best and only option. It was pitch black when I awoke, leaving me to stumble about to find the exit. Once I emerged outside, I was greeted by the starry night sky.

Those fleeting moments of beauty are part of what make The Long Dark worth enduring. Developed by Hinterland Studios, The Long Dark is a game of survival set in the Canadian wilderness following an unknown geomagnetic disaster. Your character awakes following a plane crash because of said disaster, armed with nothing but a flare and the clothes on their back, forced to survive as long as possible until… they die. There’s no endgame, no one to save you from this harsh situation. You’re simply left to live out the remainder of your life in the biting cold of northern Canada, struggling to hold on as long as you possibly can. Though the full game (it’s currently in alpha) will have a proper story, the sandbox mode captures The Long Dark at its purest.

Upon starting, you’re dropped off in a random corner of one of the two locales available. You start with next to nothing, forcing you to scavenge the area for whatever supplies you can carry without overburdening yourself. The items you find stuffed away in and around houses, cabins, outposts, and the occasional frozen body – food, tools, firewood, rifles and ammunition – differ with each play-through. Where a cabin once held hatchet and hunting rifle on one run could contain nothing more than a can of beans and some wool socks the next time around, ensuring that no one place of shelter can be counted on.

It’s sort of a rougelike in that regard, only the map never changes, so you’re always going in with some level of familiarity for what little good that does. I’ve gone through the first area – Mystery Lake – a several times now, and I’ve always just barely managed to scrape by for a while before I succumbed to defeat. I generally knew where to go, what to look for, and what to carry with me, but that didn’t stop me from making a bunch of wrong turns and bad decisions. I planned to make a run toward the dam early on once, as I was close to the railroad tracks that led to it. Between its size and the number of containers there, I figured I was sure to find at least a couple of the tools I needed. Only, I went the wrong direction and got lost for an entire day, braving an icy windstorm for most of it. It worked out in the end, if only for a short while.

Found a cabin with a rifle and a hatchet inside, as well as a workbench to make some traps, and decided to hold up there for a while. Had to keep moving, though, and ended up wandering about for several more hours with no shelter in sight. Exhaustion was setting in as I continued to freeze, my condition dropping below 50% all the while. Worse, wolves were on the prowl in most of the clearings, leaving me to run along the hills and further away from shelter. Granted, I could have taken them – between my hunting rifle and hatchet, I was a force to be reckoned with – but if I was going to kill, I was gonna make damn sure I did so because I needed food and materials or because I had no choice. Killing just to move forward would be a waste of ammo.

I eventually made my way to a firewatch outpost atop a large hill. Wasn’t very warm and the fireplace never ran for long, nor was it even a good vantage point what with all the surrounding forestry, but it was better than nothing. Things were looking bad by this point. I may have had a gun and a decent stock of supplies, but running around in the cold for so long had taken its tool. My condition was degrading and it wasn’t getting any better, no matter how much I slept. Hadn’t caught any diseases like hypothermia, but I didn’t need to: I was doing a fine job of killing myself as is.

The thing about The Long Dark is you never get a break. Even when I was healthy, I was constantly racked with anxiety over how long I’d be able to stay that way. Seemed like no matter how long or little I spent wandering about outside, I would always end up in a bad spot faster than I could ever hope to recover from. I could have all the food and water in the world, be wearing all the warmest clothes I could find, and still it wouldn’t feel like enough.

But it is enough. Scraping by is the best you can do in The Long Dark. Never will you ever be at 100% at all times, always struggling to survive in the face of dehydration or hunger; conditions that slowly eat away at your health, making each prolonged second of life that much more excruciating to endure. And those moments of success that much more relieving.

Another few hours later and I made it back to the train tracks, making sure I was going the right way this time. A few derailed train compartments lay across the road. A frozen body lies inside one, a deer carcass a little ways ahead. Perhaps they’re connected? I don’t dwell on it; have to keep moving. I eventually make it to the dam, the way toward the Coastal Highway (the second area you can start in) just off to the side. There’s tons of houses down that way – definitely more effective shelter than the dam would provide. Could have dropped the original plan and made a run for the nearest household, finally start making a recovery perhaps. But I didn’t. I went into the dam and settled in to work on a safe, only to be killed by a wolf that was hiding inside before I could react.

One seemingly innocuous choice. That’s all it takes for things to go south in The Long Dark. If I’d taken one small turn, things could have gone differently. I could have lasted longer, found reliable shelter for once. I’d been able to make it by up till then, but my luck ran out. Took a risk and paid the price. Such is the way of The Long Dark. Maybe I’ll have better luck next time.