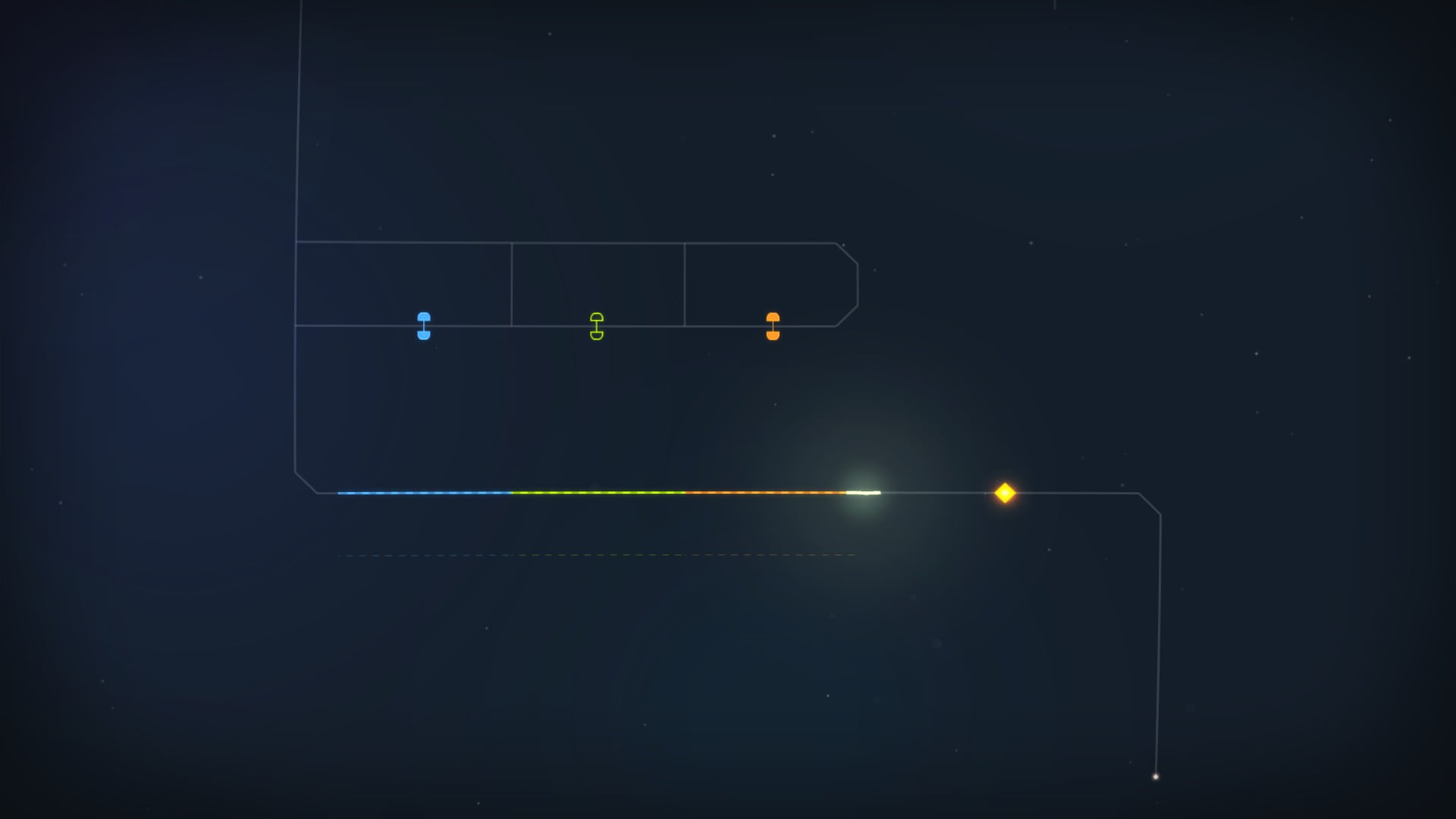 For a genre that seems tailor made to unwind with, I wouldn’t call most of the puzzle games I’ve played over the years relaxing. Tough, taxing; sometimes frustrating, but ultimately rewarding: those are the words I’d use to generally describe them. I love puzzle games, but they always have a habit of driving me up the wall eventually due to how inscrutable they all eventually become. What always begins as simple problem solving or logic puzzles soon transform into intricate webs that require intense mental gymnastics to work out. Means I end up getting fed up with them despite enjoying them.

Linelight is different in that regard. It’s a puzzle game that trades on its calm atmosphere and straightforward but satisfying riddles. Linelight sees you moving a single sliver of light through a long, winding road, solving puzzles along the way. The puzzles often revolve around unlocking pathways and avoiding hostile lines of light. There’s a fair amount of variety, though the game’s careful to never turn into anything too complex. Every new wrinkle never strays from the basic principles of building puzzles around movement. Whether you’re merely navigating mazes littered with red lines to avoid, pulling purple lights around by magnetizing yourself, or working in concert with orange lights that move when you move, the puzzle structure remains simple and elegant throughout.

Each level never takes much work to solve. Within seconds of laying eyes on the puzzle, it’s instantly clear what you need to do. And in the few instances where the order of operations isn’t immediately apparent, it never takes long to work out. That’s largely due in part to how Linelight eases you into its many puzzle types in rapid succession. Each new world begins by introducing a new mechanic, the very first stage always acting as a simple demonstration of how it works before prompting you to use it to start solving some actual puzzles. Every level from then on slowly ramps up the challenge, such that when Linelight starts to become devious with the final stretch of each world, you’re familiar enough with that particular world’s tricks that you can keep moving forward with ease. This prevents the game from ever having any sudden difficulty spikes.

It makes Linelight the kind of puzzle game that’s perfect to unwind with. Some are best suited to making the most of your problem solving skills, but Linelight’s more focused on being simple and breezy. The sort of game you could throw on for a few minutes, solve a few levels, and put down again until the next time you need a quick break. With only a couple hours of play logged, I was able to get through four of its six worlds with relative ease. It’s very much a game that benefits from moving slowly rather than plowing through it as quickly as possible. Add it’s lovely music and astral backgrounds on top of that and it quickly becomes just as relaxing to look at and listen to as it is engaging to play.

I’ve still got a hundred or so more levels to solve, along with a bunch of additional hidden stages to find. In most other puzzle games, I’d be feeling overwhelmed by now, the late-game levels proving too difficult to keep myself enthused enough to continue playing. But because Linelight is so easygoing, I’ve been able to enjoy it without fear of fatigue setting in. It’s precisely the kind of puzzle game I wish I’d see more of.