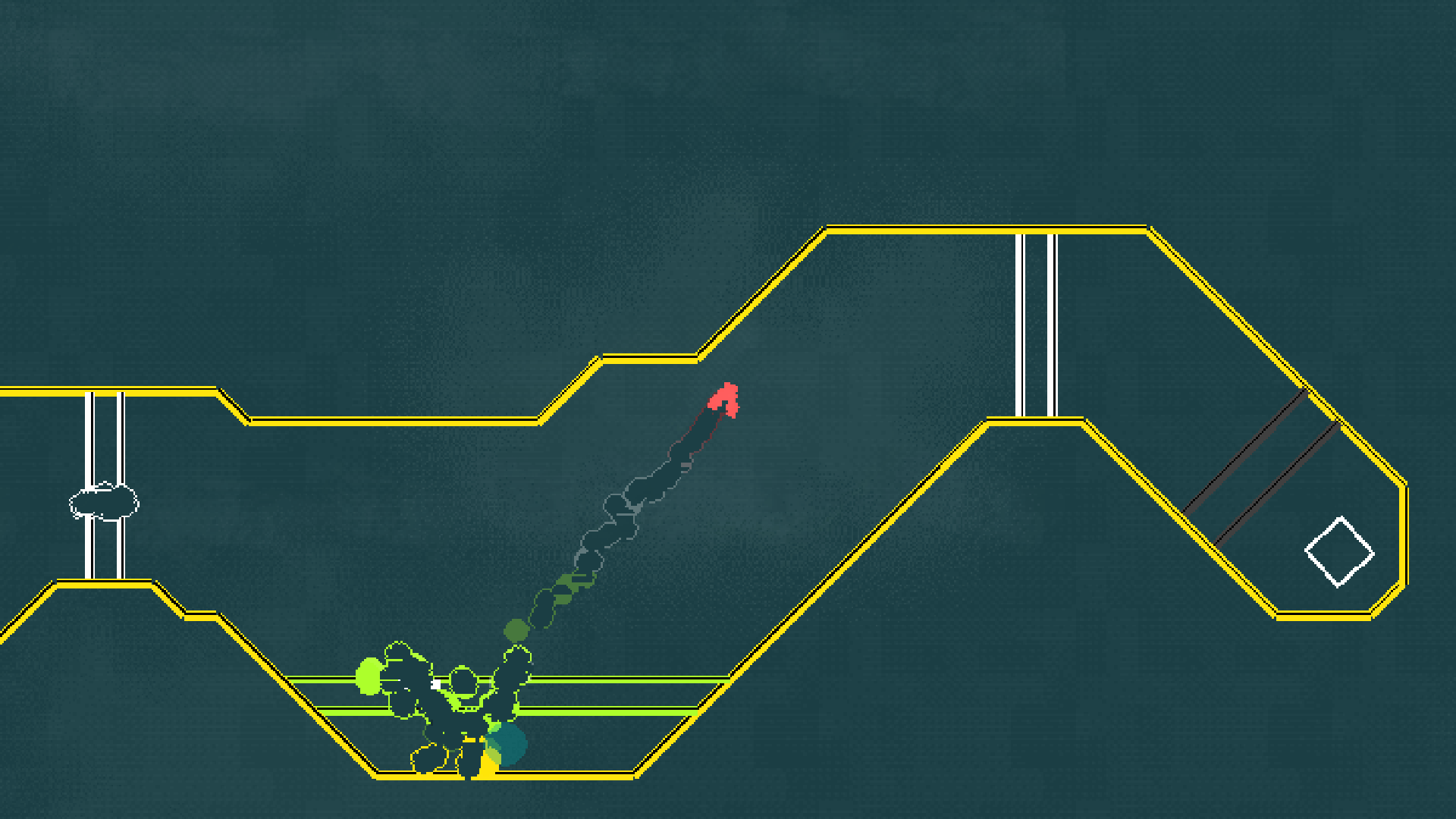 Difficult games always feel like a test to see whether you’ll best whatever it throws at you or if it’ll prevent you from moving forward due to its challenges exceeding what you’re physically capable of. Before Flywrench, I hadn’t encountered any examples of the latter. Any time I stopped playing an extremely hard game was because I ran out of patience rather than it being due to an entire swath of the game was simply beyond me. I always expected that to be a frustrating experience, something that could instantly ruin a game no matter how much I’d enjoyed it up till then.

Except in Flywrench’s case, it didn’t. It was quite refreshing, actually.

Flywrench sees you navigating winding obstacle courses to activate satellites around our solar system. For what purpose remains unclear. A disembodied voice waxes philosophical between each planet, making allusions that your efforts are building toward something. The short-term goals are clear: make it to the end of each stage without hitting the walls. A simple task in theory, but damn near maddening in practice.

That’s largely due to the nature of your craft. You have to flap its wings to keep it afloat, but not too quickly, otherwise you’ll crash into the ceiling. You can’t wait too long either, lest you fall too quickly to recover. It’s very touchy. All too often you slam into walls when all you wanted to do was move a bit to the left. Likewise when you try to hover and instead end up soaring into the ceiling. Trying to maintain a steady altitude while also navigating increasingly fiendish mazes is hard enough, but the ship moves with such speed that making quick, precise movements feels almost impossible.

It’s only difficult due to how you’re forced to blaze through each level rather than take it slow and carefully inch forward. Momentum is the only way to bypass the many obstacles in your path. Red, green, and white barriers line the road to the finish line, each only passable by shifting your ship’s color to match them. Crossing any one of them individually poses little issue. Grouped together, requiring you to switch colors in quick succession? Not so much.

Flywrench only becomes more devious with each new stage. Turrets unleash steady torrent of bullets, making an already dangerous playfield even more volatile; blue switches open like-colored gates for a brief time, forcing you to scramble from whatever corner the switch lies in before the gate locks itself up again. Eventually it throws a bit of everything at you in a single level, testing the limits of your dexterity and reaction time.

Failure is constant – especially so the further you go – but Flywrench remains a thrilling challenge all throughout. Every bit of progress feels like an accomplishment, even if you do immediately ram into a laser after finally making a breakthrough. Those small victories help keep your momentum up, allowing you to continue trying to push forward no matter how insurmountable the challenge may seem.

At least up until I reached Mercury. Then I hit a wall that I couldn’t hope to overcome.

I tried everything: skipping ahead to other unlocked levels, unlocking everything (the game lets you do that from the options menu; really appreciate small touches like that) to see if I could find a level I could handle, taking long breaks from the game… nothing worked. The result was always the same: constant, never ending failure. It was frustrating because I’d been able to get through the rest of the game just fine, despite it being just as tough. The problem isn’t so much on Flywrench, but myself. What the game demanded of me and what I’m physically capable of simply weren’t compatible anymore.

Most times when I reach a point like this, I end up frustrated. With Flywrench, I was… indifferent. Probably because I saw it coming. In most other difficult games, I any time I feel like I want to quit is born purely out frustration. Whereas with Flywrench, I felt ready to stop earlier on because I could feel the game quickly outpacing my skill. I kept going, and even though I was still enjoying the game, I knew this was coming.

It’s a nice change of pace. Usually difficulty climbs in games in such a way that there’s usually a sudden spike. Everything will be going smooth and swell, before suddenly taking a huge turn that makes things terribly annoying and unsatisfying. The sort that makes you sigh in relief that you never have to do again, instead of feeling good that you managed to pull it off. Flywrench understands how to make a good difficulty curve and how easy it is to screw it up. It’s part of what ensures the game never truly infuriated me, no matter how fiendish its levels became. Every new addition to the levels felt like a natural next step, a way the game subtly hinting at how they could and would be used later.

Accepting that you can’t keep progressing is much easier when you can see that point coming. Disappointing as it is to be unable to finish Flywrench myself, I can hardly be angry about it. I got a good chunk of enjoyment out of it. At some point, that’s more important than whether I can say I completely finished a game or not.