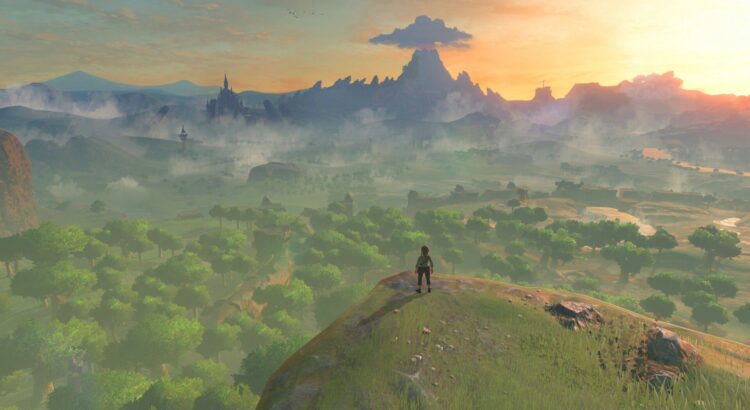 In the time since finishing The Legend of Zelda: Breath of the Wild, I’ve occasionally loaded the game up and just wandered around Hyrule. I’d take a quick survey of where I was and pick a direction to set off in, never using the map to chart my path or scout for any particular destination. I didn’t any specific goals in mind; all I wanted to do was wander aimlessly and relax. Sure I could be hunting down those last few shrines or clearing my quest log of side-quests, but I’m not particularly interested. With the story finished, all I want to do is just spend more time in the world and enjoy it.

I can’t think of any other open world games that instill that same desire in me. Usually it’s stuff out of the altgames scene and their particular brand of wander games (or “walk-‘em-ups” as my friend Gareth calls them) that consistently deliver. The austere watercolor landscape of Sacramento, the vignettes of A Road to Awe’s abstract world, the wonder and musicality of nature in Proteus, and so on; games built around wandering around captivating worlds merely for the sake of exploring them. They’re wonderful games, ones I often return to when I need something to kick back and relax with.

It’s something big-budget games have failed to accomplish. While they may create vivid, immaculate worlds, never do they inspire the desire to wander aimlessly. Open world games are great candidates to make that happen, as they’re built around letting you freely explore to some degree, but inevitably get bogged down by busywork. Seas of objective markers, quest-givers, and collectibles ensure you’re never at a loss for what to do. There’s always a dozen things vying for your attention. It’s suffocating.

I rarely pay attention to the land itself in open world games, as such. I’m always focused on reaching the next waypoint, finding my next objective. I never take my time to walk around and take in the sights, to see what wonders it holds. That’s because most of these games are built in such a way as to disincentivize doing anything but follow map markers, but also because the worlds are flat. They’re pretty, certainly; Horizon: Zero Dawn is a constant visual delight, for instance, but that’s all it is. A pretty vista to gaze upon from afar. To actually engage with these worlds, to want to explore them to their fullest; not in the pursuit of objectives but for the sake of just seeing what’s there – it’s something no open world game has succeeded at.

But Breath of the Wild does so brilliantly. That’s in part due to how it doesn’t immediately populate the map with a ton of preset markers to lead to you points of interest, which forces you to engage with the world in a way most open world games don’t. But mostly the fact that its world is captivating to be in. Regardless of whatever I was doing at any given moment, I always enjoyed the simple act of traversing Hyrule. So much so I always felt a bit bad whenever I used fast-travel. Felt like I was robbing myself the chance to discover something new, or at least enjoy the sights.

Before Breath of the Wild, Okami was the last game to instill that want in me. Its world was captivating enough that I wanted to spend as much time immersed in it as possible. Thus I intentionally restricted myself from making use of fast-travel. Its world was much smaller and easier to cross, granted, so it was never really needed in the first-place, but still. It took just long enough to get from one end of the map to the other that it feels like a long trek, just long enough to tempt you to teleport to your destination instead.

The same goes for Breath of the Wild. I specifically held off on using fast-travel much as possible because I wanted to see what was out there. The sheer size of the world made it difficult to avoid using fast-travel altogether, but that also made it worth exploring in the first place. There’s so much to see, so much to find. Never did I ever feel like I was wasting my time searching every inch of Hyrule, even when I wasn’t actually discovering anything. In any other game I’d be climbing mountains only in pursuit of some object. In Breath of the Wild, I’d do so just to see what the view from the peak was like.

That’s by far the game’s greatest strength. It doesn’t need all the usual open world game trappings to make its world worth exploring. If anything, it’s because Breath of the Wild discards them that its so worthwhile to wander around in. It trusts that the landscape itself will drive people to explore its depths rather than fall back on marking everything on the map for you to jump between. It makes every inch of its world matter, because none of it acts as filler between activities. There’s always something to see, always something to find or do. You just have to make the effort to look.