For as popular as local multiplayer games are these days, it feels like the competitive variety far outnumbers the cooperative sort. Space Mace, a small indie studio based out of Minneapolis, Minnesota, feels that the local multiplayer scene could use more cooperative games. The studio has made them their focus, with their first game, Joggernauts, looking like a promising start to fulfill that mission.

Joggernauts is a cooperative autorunner. In it, up to four players work together to navigating increasingly difficult levels by changing formation. The characters move in a line, the person in front needing to match the color of whatever platform or obstacle stands before them in order to continue forward, leading everyone to switch places constantly. Like the best local multiplayer games, it looks like it’ll be a rousing good time.

The team at Space Mace — Zachary Johnson, programmer and co-designer; Tommy Sunders, artist and co-designer; and Robert Frost, composer, sound designer, and community manager — reached out to us recently to chat about the game and its inspirations.

Entertainium: So how exactly did Joggernauts come to be? The press kit mentions Bit.Trip Runner as the genesis for the idea, but I’m curious to hear more. Was there something about auto-runner games in particular that you felt made sense for cooperative play?

Zach: I was playing Bit.Trip Runner with my dear friend Jesse. We loved playing Bit.Trip because it has these very tangible goals that always feel just one-more-try away from victory. We were taking turns since it is a one player game, but we were both so invested in each other’s success. Joggernauts really quite literally came from the question of “How could you bring this feeling into a multiplayer game?” It is kind of a secondary bonus that there hasn’t been much exploration of multiplayer autorunners in general.

Is playing single-player games that way something you do a lot?

Zach: We grew up playing a ton of games this way. Multiplayer options used to be pretty limited. Sometimes you were just watching somebody play through a story based single-player game, other times you were taking turns trying to beat a really tough part of an action game.

Has balancing the difficulty curve been tough? Considering that team coordination seems to be the primary source of challenge, I imagine it can’t be easy to design levels that are difficult without being too demanding.

Zach: We’re always working on reducing competition between players on the team, making sure each player has frequent and equal contributions they must make to the team’s success, and finding ways for experienced players to give a helpful boost to the team without being able to completely take over for a newer player. 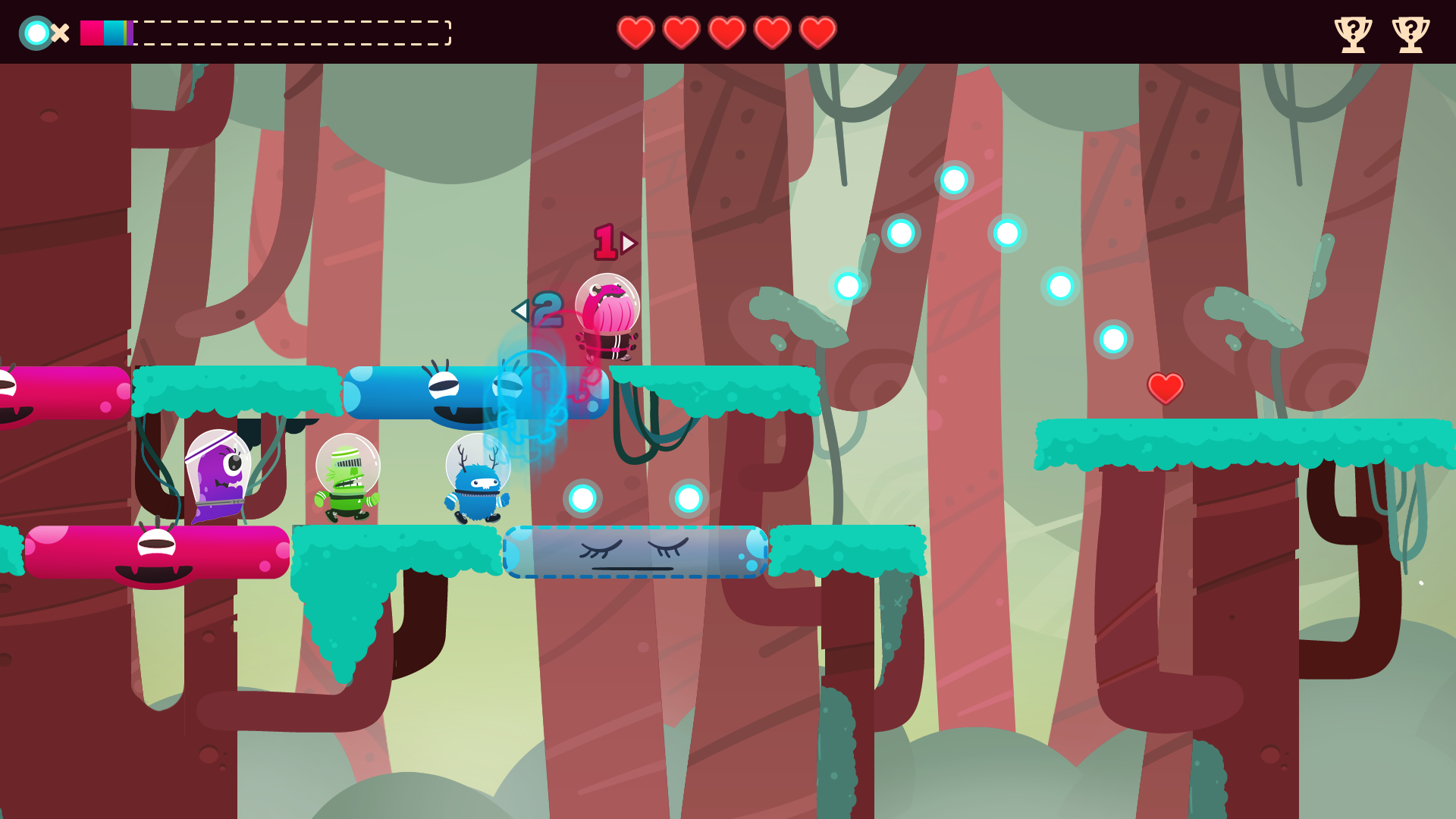 I noticed there seem to be multiple paths through levels, the characters sometimes splitting up between different parts of the stage. What’s the purpose in doing so?

Zach: Splitting the team up vertically allows for little puzzle-like challenges where you learn how to use the game’s switching mechanic to kind of put a player in two places at once. When you switch to the front, you are also pulling whoever was in front back to wherever you used to be. It is a major progression in the difficulty of the game.

Was there any particular inspirations for the art and music? Or any general insights to share, for that matter?

Rob: The sound design for Joggernauts is mostly influenced from the old Nickelodeon cartoon, Doug. Probably 50% or more of the SFX are made primarily using my own voice. I’ve added lots of nerdy little easter eggs from pop/music culture that very few will catch. I’m certainly hoping they will though! The soundtrack is heavily influenced by generic commercial music of the 80s, Toe Jam and Earl OST for Sega Genesis, Donkey Kong Country OST for SNES, and other modern Nintendo games and system menus.

Tommy: The goal for the look of Joggernauts has been “approachable with a touch of derp” since it’s earliest days. Inspiration comes from all over – but the environments and colors of No Man’s Sky, the loose playful art style of Hohokum, early Mario games, and more recently the background art in Steven Universe have had the biggest impact on the look of the game. Since the gameplay is based on color, a lot of extra attention goes into the color and contrast in the environments. We need to make sure you can tell the difference between a green monster and the bush next to it.

You all have mentioned that Joggernauts has gone through a lot of public play-testing. Do you think that’s been more beneficial than the usual early access model?

Zach: It is pretty much impossible to design a multiplayer game unless you have people to play it with regularly. Joggernauts is also as much about what happens off the screen between the players as it is about what happens on the screen. We need to see and feel how our ideas work first hand with different kinds of teams and players. We’re incredibly lucky to have such a large group of people in our Minneapolis game dev community who love to play test games.

How is the local scene, anyway? Always curious to hear how other communities are faring.

Zach: Minneapolis has a lot of game dev stuff going on! There are several monthly meetings on various games topics with turnouts often over 50 people at the main events. We’ve got a community website at IceCold.Games. We also have a regular Friday co-working hang out at a donut shop, and we’ve put a bunch of our games on the Donutron arcade cabinet there. It is the only public place where people can play our beta builds of Joggernauts right now.

As a team, you’ve have expressed a particular interest in cooperative games. Why make them your focus?

Zach: Competitive games are the most fun to play with people who share a similar interest and skill level. It isn’t fun to always win or always lose. We want to make games that are fun to play with all of our friends, not just some of them.

It seems like competitive games tend to be the most popular form of local multiplayer, though. Is that something you all are hoping to change?

Zach: Definitely! People know how they feel about competitive games. It is time for them to try something new.