If there’s one thing Capcom has been known for over the years, it’s for having a knack for re-releasing their games. Be it with the numerous tweaked versions of Street Fighter II in the 1990s or the later enhanced ports of the original Resident Evil, it’s safe to say that they really count on their fans to continually buy their biggest hits over and over again. And be it as it may, compilations are also in that list of hits that Capcom has tied their business model over the decades they’ve been around, making use of their vast catalog of arcade games in order to scrape a buck or forty every now and then.

Street Fighter 30th Anniversary Collection is the latest of these, and as its name suggests, it packs a bunch of the Street Fighter games that have come out over the years, such as the very first (and incredibly dated) Street Fighter, a few iterations of Street Fighter II like Hyper Fighting and Super Turbo, as well as all three of the Alpha releases (called Zero in Japan, also my favorites) and the three variations of the beautifully animated but hard to master Street Fighter III. As a die-hard fan of the franchise, I respect this list, but would’ve loved to see some of the more obscure games included, such as some of the entries in the Street Fighter EX series, although it’s understandable why they weren’t — licenses and all. 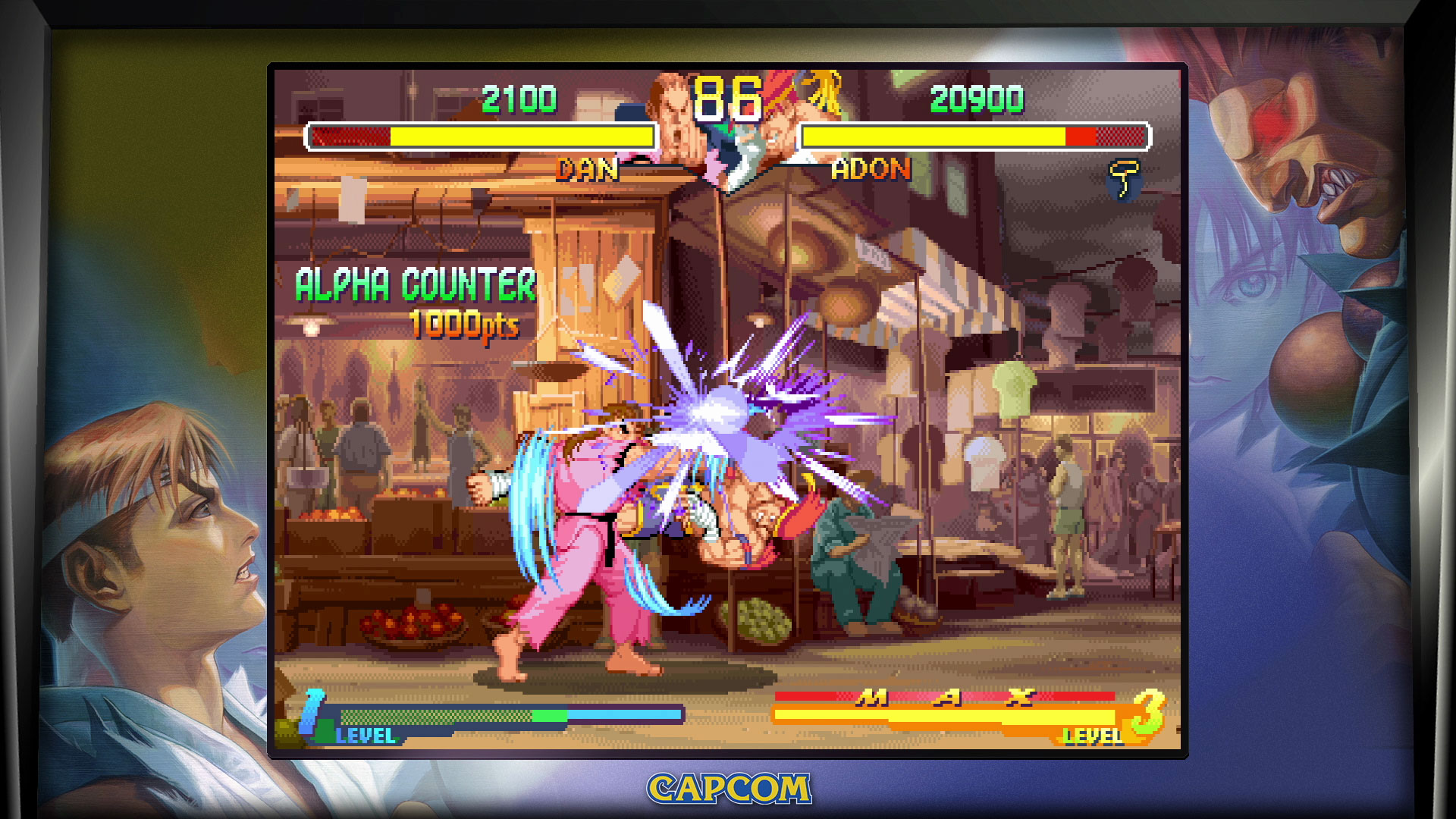 We’ve had the opportunity to play most of these games over the years in some of the other collections put out every other anniversary, such as the Street Fighter: The Anniversary Collection released on PlayStation 2, but this is pretty much the first time Capcom has released a compilation with so much series-wide variety, and in general, they’ve done a good job with it. The emulation used for the collection feels faithful to the original versions of the games included, for better or for worse. There’s some awkwardness in presentation that stems from the way the collection loads up the individual game ROMs off of save states when playing them in multiplayer, throwing you directly to the character select list and repeating the same section of music every time you load back up. Luckily, that’s not the case when loading up in solo mode, where the games are loaded from the start screens. It’s also a little weird to get tossed into a glossy menu instead of the classic countdown screen after fighting in multiplayer, but it’s not that big of an issue.

In terms of actual graphical and audio fidelity, the emulation used in these ports is quite good. The game offers a lot of options you can tweak, like graphic filters and scanlines, as well as screen shape — such as the game filling the entire screen, stretching it out for widescreen displays, which is totally not recommended, or leaving it at the native screen ratio, with a border. None of these is particularly noteworthy since they’re now pretty much standard in any retro collection of this sort, but they’re welcome nonetheless.

During my time testing these games online, via Steam, connectivity performance has been less than stellar, with constant lag and very few matches where the game was remotely close to being playable. Granted, my Internet provider isn’t the best around, but previous releases of some of these games, like the PlayStation 3 port of Street Fighter III Third Strike Online Edition back in 2011 ran far better under the GGPO online infrastructure. Here’s hope that Capcom is working on correcting these issues, but at the time of writing this review, I’ve yet to play a lagless match of any of the four online-enabled games, even against people located in the same region as me.

And it goes without saying that the extras included in that version of Street Fighter III, such as the trial mode that culminated in putting you in fighting game legend Daigo Umehara’s seat during the infamous EVO moment #37 against Justin Wong. It’s a sad omission that would’ve made Street Fighter 30th Anniversary Collection a much stronger package, especially considering the truck-full of side content that accompany the games in this collection, like the original art sketches for unused characters, marquee displays for the original arcade units, a complete year-to-year timeline for the franchise, and even animation frames and hitbox data for each of the characters.

As it stands, if you’re looking for a compilation that includes as many and varied Street Fighter games, you can’t go wrong with Street Fighter 30th Anniversary Collection. It does the franchise justice in the way it lovingly includes a ton of extras, even if it’s missing actual gameplay features that were present in previous re-releases. The online play issues are also a punch in the gut to anyone looking to put their fight money where their mouth is, which is a damn shame considering the great results that Capcom has gotten in the recent past. It’s also worth noting that this is a great alternative if you’ve been waiting for another way to play Street Fighter on your Switch instead of the somewhat overpriced and under-featured Ultra Street Fighter II. It’s a sure bet that Capcom will be releasing another compilation later down the line, but as it stands, problems and all, this is currently the most complete — and legal — option to play the older Street Fighter games on current consoles and PC.