Cyberpunk 2077 already left a mark when I first got to see it for almost an hour at last year’s E3. The 2019 edition of the show brought in another long form hands-off demo, this time showing off a much further ahead in development version of the game, complete with an actual player character, and more of a look at the surreal futuristic landscape of Night City.

The demo started out with character creation, which allowed the dev handling the controller to pick from a variety of starting features, such as traits and abilities, which in the strict purpose of displaying the many different facets of character skills, had two initial archetypes to choose from, a more stealth-focused hacker type, and a brutish alternative who’s apparently good with weapons. CD Projekt Red made it a point to state that these choices were merely for demo purposes, as the final game would be open-ended, allowing you to create your own character, stats-wise, and evolve them throughout your adventure in the game. 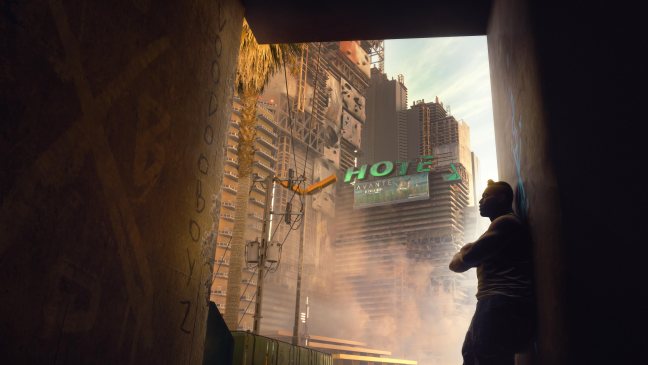 We were then dropped into a section of the city named Pacifica, which was taken over by the Creole Placide, who ended up hiring V, the protagonist, in order to infiltrate and eliminate the Animals, another faction who’s keen on pumping iron and getting big, that took over a big complex called the Grand Imperial Mall at the other side of the zone. V apparently wanted to get in touch with their leader Mamam Brigitte, so they went along with the plan, not trusting them all the way. After all, their handler, a big hulk of a guy called Placide, who wasn’t at all friendly, forcing V to hook into his machine, which they ended up complying with.

Getting into the building proved to be the initial challenge of the demo, since it was heavily guarded and just walking past the entrance instantly put the grunts in front on alert, so the more stealthy of the two builds managed to get in via a less guarded door which allowed them access to the outer layer of the fortress. Hacking their way in allowed the dev to show off how slicing worked in the game, a surprisingly complex net of cryptic signals that not only let them unlock doors and deactivate cameras, but also gain control of other security systems if their skill was high enough for that, and most importantly, if they could figure out the strings of commands that were required to do so. That didn’t merely depend on having enough skill points, but also apparently required them to put together code sequences for particular hacks, which looked particularly ingenious.

Deeper into enemy territory, we switched archetypes, so when the stronger but less tech-savvy V took over, they should an alternate entrance that allowed them to burst open a door and get inside, where a huge firefight ensued, which eventually led them to kill the leader of the Animals, and find a way towards their ultimate goal: the theater within the mall. We flipped about to our hacker persona and kept going the quiet way, where we found some Animal grunts pumping iron, so the dev played it sly and hacked the dumbells, strangling the poor fool, and upon reaching the automated machine gun sentry in the huge room where the big gun battle took place before, they hacked the damn thing to help them thin the herd a little. Goes without saying that things went very well, but not without some stragglers, which V dispatched using their whip-like nanowire, the tool that they use to hack people and machine alike from afar, that also acts as a deadly melee weapon, literally slicing anyone who opposed them.

We ended up in the same room as the alternative run, now face-to-face with an enemy hacker who’d been snooping around V’s mind throughout the entire demo. He divulges some interesting info: the Voodoo Boys are playing fast and loose and plan to double-cross you as soon as all the Animals are taken care off, not to mention killing the poor sod who’s at your mercy at that point. The CDPR demo handler decided not to trust the guy and offed him — a common theme to some of this E3’s demos, as I saw with Dying Light 2 earlier that week — at which point his warning became reality and V dropped to the floor like a sack of potatoes.

Luckily for us, we survived, and ran back to our former friends’ base seeking retribution. Placide wasn’t at all pleased about seeing us up and about, but before we could really put a hurting on him, Brigitte suddenly appeared, and offered to help us with our mission, to dive into cyberspace and figure out what’s going on with our tech-infused mind. At that point, the game took over control and showed us a cutscene where a tub full of ice was prepared, and Keanu Reeve’s character Johnny Silverhand creepily appeared as an apparent vision only V could see and interact with, and delivered some exposition dialog before V got into the tub and blacked out, emerging in cyberspace, where Brigitte was waiting for her and ready to spill the beans. At that point, the demo concluded — everybody wanted more, but hey, can’t expect them to show it all in just 50-ish minutes, right?

To all intents and purposes, Cyberpunk 2077 still looks amazing and I really want to play through the entire thing as soon as it’s out. Night City feels like a mix between Blade Runner’s Los Angeles and a host of different decadent future locales from other similarly themed stories like Akira, Ghost in the Shell, Battle Angel Alita, and the such, with people desperate for their next fix in the form of implants, and the advertising pushing for stronger, faster, better tasting, the whole jazz. The amalgam of cultures that stirred in the little that I got to see was quite cool to see, and considering that’s only a slice of what the full experience promises to show, taking into account the richness of CD Projekt Red’s worlds such as the one they crafted for The Witcher 3, I’m willing to bet that Cyberpunk’s must be even crazier.