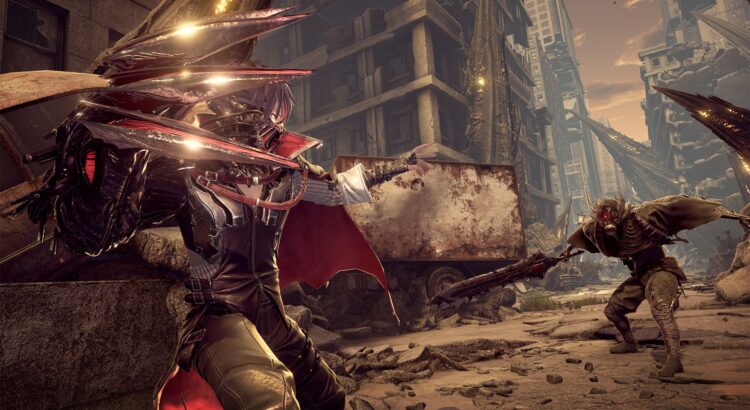 Calling Code Vein “anime Dark Souls” feels reductive — almost dismissive, even. For as much as Code Vein takes heavy inspiration from the Souls series, it does do a ton of interesting things with the formula that make it very much its own thing, even iterating on it in ways that other Souls-likes could learn a thing or two from it. But also, it’s totally anime Dark Souls.

Emphasis on the “anime” part, specifically. While the Dark Souls influence can definitely be seen in its story here and there, it’s primarily relegated to Code Vein‘s mechanics. It plays very much like you would expect out of a Souls-style game. All the usual staples are there: you’ve got a stamina meter, bonfire equivalents, a renewable healing source, interconnected spaces that wrap around on themselves to reveal shortcuts, and so on. It is very much one of those games through and through. And it all works well! It has a good understanding of what makes the Souls series work while still putting its own spin on the formula.

Code Vein is set in a post-apocalyptic world wherein an event known as “The Great Collapse” destroyed society as we know it. You are a revenant — essentially an undead soldier/vampire created in the initial aftermath of said collapse to combat the monsters it brought forth. You wake up many years after the calamity hit, the world now nothing but ruins. At first, you’re simply looking to find out more about the world and what happened (you’ve lost your memories somewhere along the way before the game begins), and eventually have to fight to save the world from total destruction as the plot escalates.

The story is a lot more direct and involved than From Software’s work, let alone many other Souls-likes. Cutscenes are frequent and the game is very direct in its storytelling. Code Vein doesn’t wait long to explain in what’s going on and how you fit into everything, leaving few things shrouded in mystery. It’s not one for subtlety. Still, its writing is serviceable. The characters are fun and reasonably well-developed, their stories equally interesting and affecting. It takes time for the plot to really kick off, but it has enough intrigue to maintain interest as it establishes its world and the stakes. (Quick aside: it’d be nice if the game wouldn’t make most of the women among the central cast so hyper-sexualized, particularly since one of the characters is said to be 16. Even some of the boss monsters are sexualized, which just feels comical given how ridiculous it looks.)

One of the biggest things that separates Code Vein from its peers is how it handles character classes and attributes. In your typical RPG, you’re pumping points into individual stats like strength, dexterity, endurance, and so on every time you level up. In Code Vein, you don’t do that. All that increases with each level is your hit-points, stamina, and your general attack power. All your stats are instead dictated by your “blood code” (i.e. your character class). At the start of Code Vein, you only have three to choose from, each representing a standard set of RPG classes: fighter, for close range combat; ranger, for ranged combat; and caster, for magic. You find plenty more throughout, but they’re all broadly based off those three archetypes. Some will emphasize close combat but have a preference for either light or heavy weaponry, while others will focus generally on spells but provide stronger scaling for the light or dark variety. Most importantly, however, you can swap out blood codes at any time.

So say you start off using the “caster” class. If you suddenly decide you’d rather go for tank build (heavy armor and a greatsword or hammer, for instance), you can just swap out blood codes and equipment and immediately be set. You don’t have to worry about reallocating stats since they automatically change upon switching blood codes. It all serves to make character builds be more fluid than your typical RPG. It’s a fantastic idea. Too often it’s easy to feel paralyzed by how much choice there is in how to build your character. In something like Dark Souls in particular, where resources are limited for a while and you don’t get the ability to reallocate your stats off the bat, it’s harder to correct course if you find out a particular play style doesn’t work for you. That you can effectively change builds whenever you want actively encourages you to experiment.

Another point: by default, you’re always accompanied by an AI partner. Instead of roaming around solo until you decide to summon help in the form of another human player (which you can also do in Code Vein), you always have help by your side. This serves two purposes: one, for story reasons, as you and your allies are always technically traveling together, so having at least one of them present during play makes sense. And two, to even the playing field in battle.

Code Vein, like any Souls-inspired game, isn’t easy. Combat is quick and lethal. It only takes a couple of good hits from an enemy to put you in a bad position. As such, having someone to watch your back at all times helps a lot. Fighting hordes of lost revenants is easier when you can divide and conquer rather than try to contend with three or four enemies on your own. Gives you more chances to retreat and heal as well, since you can usually count on them to cover you long enough to restore some health. Plus, they can revive you if you fall so long as they have enough health of their own to sacrifice.

At least in theory. While your partners generally do a splendid job, the enemies can be unpredictable in who their targeting, which leads to some annoying fights where your partner is unable to really do much to assist you. Bosses are especially frustrating in this regard, as they’ll randomly decide to swap targets — usually as part of one of their absurd homing attacks that will almost assuredly catch you off guard. While the majority of the bosses weren’t too much of a problem — they struck just the right balance, but aren’t very memorable — there were a few in particular that frustrated to no end.

The spaces you fight them in are always large and open, ensuring you have plenty of room to move and ideally put some distance between you and your opponent. It doesn’t help a whole lot, though, given how quickly bosses can — and will — immediately target you and instantly zoom in on your position should you dare to retreat. The worst part is those attacks hit hard and can easily lead to you getting stunlocked into oblivion. Ideally your partner should be able to hold their attention when you need to back off. Instead, try as they might, it’s often for naught as the boss tends to just randomly decide to target you instead. It diminishes the role they serve to simply being a revive mechanism as the game doesn’t allow them to provide proper support during boss fights due to the bosses erratic behavior. It’s disappointing because the partner AI is competent otherwise and helps a great deal during exploration.

For a first attempt at Souls-like design. Code Vein does a great job. It nails the basics and uses them as a launchpad to put their own spin on it rather than just make One of Those without attempting anything fresh. It’s got some rough spots, namely in its boss fights, but it also has some really cool ideas with regards to character builds that I really do hope some games take notice of. It’s a splendid take on the Souls-like on the whole, one I wouldn’t mind seeing more of.