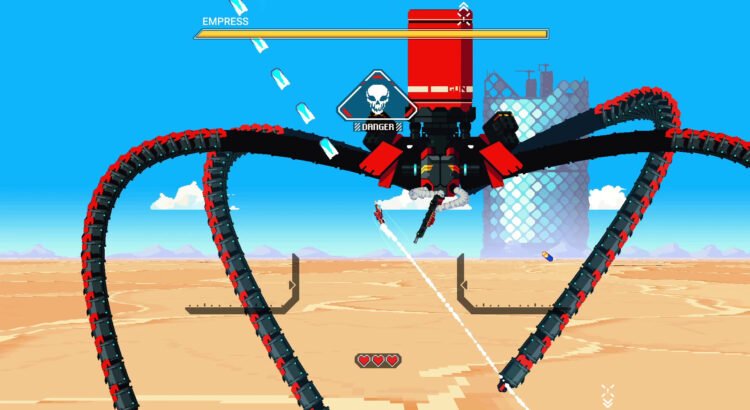 Jet Lancer is an arcade-style action game wherein you pilot a fast, high-powered jet as you complete various odd jobs to earn the highest rating possible. It’s like Luftrausers but with some fun anime-inspired stylings instead of a bunch of fascist aesthetics. So, you know – way better.

You take the role of Ash, a mercenary pilot who’s just come into ownership of an experimental jet that’s supposedly “haunted.” What starts off as a series of typical jobs fighting against pirates eventually becomes something much bigger after several ancient weapons are uncovered and deployed, prompting quick action if they wish to keep the surrounding cities safe.

Jet Lancer is split into discrete missions. It’s not a run-based sort of game where you’re merely trying to survive for as long as possible (it’s not that kind of arcade-y), but rather one with a focus on replaying old missions for better scores and ratings.

You can change the loadout of your aircraft between missions, allowing you to lightly customize its weapons and abilities and essentially add some extra difficulty modifiers if you want. Only one I’ve unlocked so far is the one that increases the maneuverability of the jet at the cost of all its armor, meaning I can only take one shot before it’s game over. Other abilities include different types of secondary weapons, such as a large laser that fires directly in front of you or a heavy bomb you can drop beneath you.

The Luftrausers comparison is apt not because they’re both games about piloting planes, but because the action is fast and overwhelming, stylish and fluid. Every mission inevitably reaches a moment where the field becomes almost impossible to navigate as bullets and missiles fly everywhere, jets weaving around and chasing after you as you try to take them down and stay afloat amid the chaos. These moments are where Jet Lancer is at its best. Because you’re not just pursuing targets trying to land a hit, slowly thinning the opposition, but constantly engaged in battle. Taking out multiple enemy jets with a well-placed missile of your own just after evading a cluster of homing missiles, then using the attack boost gained from a perfectly timed dodge to immediately fell another pursuer feels great and is incredibly satisfying.

Mission 26 in particular is a good example of this. The objective: defend a city under siege from bomber planes. A simple enough mission. Only with one major difference: you’re fighting off multiple bombers at once instead of one at a time.

In previous missions where they appeared, you’re only ever dealing with one per wave. Which is good because they’re tough to take out. Heavily armored and surprisingly fast, pursuing one of these aircrafts is difficult to put it lightly. On their own, they’re not much of a threat. They don’t have any actual defenses; all they can do is drop bombs periodically. But with a massive wave of backup on their side, pelting you with bullets and missiles from seemingly all angles, they quickly become a nuisance.

Which is why it’s better when you only have to deal with one at a time. Easier to lower enemy numbers while taking out the bombs that way. But mission 26 isn’t so merciful. With each consecutive wave, each new appearance of the bomber planes adds one more to the count. At first, it’s just one. Then it’s two. And finally, three. All while anti-air installments fire off homing missiles, hackers constantly turn your own missiles against you, and the usual assortment of rank-and-file jets take pot shots at you.

By this point in the game, you’re likely to have a good understanding of how to play Jet Lancer well. But even if you’re really good, this mission is tough because it’s not just a matter of clearing the skies; it’s not just a matter of comboing kills to earn the highest score possible; it’s not just a matter of survival: it’s a balancing act. You have to stop the bombs from dropping – from three different targets who can drop them in relatively quick succession – while also trying to fight off all the other enemies in the area. You can’t just focus on either one. With only three hit-points and a weapon selection that, while good all told, feels woefully outclassed in this kind of scenario, Mission 26 is very much a test of your skills in a way that a lot of other Jet Lancer levels up that point haven’t been. It’s a lot. It’s exactly the kind of chaos where Jet Lancer excels.

Bobbing and weaving through hails of gunfire, frantically trying to intercept bombs, taking down any enemies you can wherever you can all the while: Jet Lancer is at its best in these moments. For as tough as it can be sometimes (though thankfully it does include a nice suite of difficulty and accessibility modifiers you can activate at any time), when it all comes together, it’s sublime.