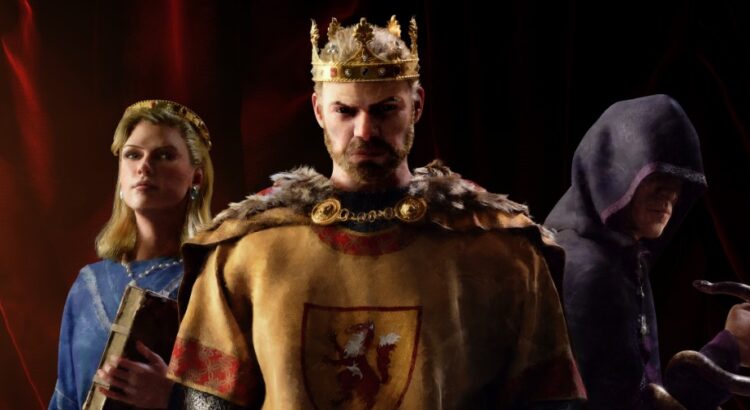 Welcome to Crusader Kings III. The year is 1070. I am King Malcolm of Scotland. South in England, chaos reigns, with Harold Godwinson still attempting to fight off the simultaneous invasions of Norway and Normandy. Harald of Norway was not defeated at Stamford Bridge, and William of Normandy didn’t succeed at Hastings, resulting in a three-sided war that has dragged on. I look upon what’s happening south of the border with disinterested eyes. If the Norwegians or the Normans were to decide to march on Perth, then there would be a problem.

No, my more pressing concern is the Duke of Moray, Máel Snechtai. The problem is he hates me, loathes me in fact. Not only does he view himself as the true King of Scotland, he also dislikes me because I’m arrogant (the very nerve of the blaggard!) I think the best course of action is for him to have a little accident. First I try slipping some poison into his wine. This manages to make him very ill, but alas he lives. Time for more desperate measures. My assassin is able to successfully stab him to death, but my involvement in the plot is exposed, meaning I’m publicly branded a murderer. But on the plus side, the Duke is dead and now my entire council is so scared they won’t dare to oppose my rule.

Crusader Kings is a grand strategy series unlike many others, because it primarily focuses on character interactions rather than battles or empire-building (although those can and do still occur). In this regard, it kind of takes inspiration from something like The Sims instead of traditional strategy games. Your primary objective is simply to secure your lineage, to be able to pass down your land and titles to your children. When your character dies, you take control of your direct heir.

But beyond that, goals are enormously open-ended. Want to invade England and establish Scottish rule across Great Britain? You can. Want to break apart the Holy Roman Empire, murder the Pope and start a crusade to the Holy Land? You can. Or do you just want to make sure your half-brother marries a Spanish princess in order to improve relations with the King of Castille? You’ll definitely be doing that as well. Crusader Kings III is a truly great sequel; a fascinatingly deep and rewarding game with options to make it easier than ever for newcomers to get acquainted.

Like Crusader Kings II before it, Crusader Kings III takes place in from the Dark Ages through to the late Middle Ages, across several hundred years of history. From a huge map of Europe, the Middle East and India, you can pick a character and start playing. The game highlights some interesting people you might want to try and provides estimates for their difficulty, but if you want you can choose to play as absolutely anybody, from the Byzantine Emperor right down to a minor Earl in the Bosphorus.

From there, the game progresses in accelerated real-time (as opposed to something like Total War’s turn-based time) as characters move about the world, starting wars, getting married, having children and dying. A lot of the time will be spent trying to juggle other characters’ opinions of you. As King of Scotland for example, I have a council composed of leading vassals who own different parts of my realm. These vassals may have their own vassals who report to them, and so on. Keeping your vassals happy is important not only to ensure your own survival, but also to make sure that taxes and levies are collected to keep the economy moving. An individual character can only control a certain area of land by themselves, and so having vassals and courtiers to help run your country or landholding is vital.

There are many different methods to help win people around to your point of view. There are the nicer methods, such as sending gifts or using politics to sway a character into liking you. Marriages are also a great way of building relationships and forging alliances, and you’ll want to be marrying off as many of your courtiers and knights as you can. But if people don’t respond to the softly-softly approach, their are always more extreme options such as imprisonment or plotting to murder them. These schemes may incur negative consequences though, such as your vassals noticing your tyrannical actions and rebelling against you.

Things will undoubtedly escalate into armed conflict, especially if you want to expand your territory (you can’t just declare war without a just cause, and so you can have your archbishop fabricate a claim on an area of land you want to annex). Raising and managing armies is streamlined from Crusader Kings II, meaning that the initial call to arms no longer requires grouping together various militia from your vassals. Instead, all your forces amass over a few days as one army at a set rally point of your choosing. Similarly, you no longer require separate ship levies in order to use boats; instead any army will automatically create the necessary boats to traverse a stretch of water (which may incur additional costs). This makes overseas invasions a lot more manageable, especially useful if you’re playing as a Viking. Battles and sieges are still simulated using the various stats of both armies and their respective generals, and you can normally retreat from fights you are losing to try and regroup your military.

A major new addition to the game is the ability to design your own religion. If you amass enough piety (by doing religious deeds and keeping in good relations with the head of your faith) you can try to do “pull a Henry VIII” and start a new religion, designing it entirely to your whim (even approving of cannibalism if you’re so inclined). Starting a religion involves considerable risk, not only backlash from your parishioners loyal to the old faith but also from other countries, who may declare a holy war against you. AI characters will sometimes start their own religions (for example in my game a Prince-Archbishop in the Holy Roman Empire decided to start a faith called “Waldenism”), which can result in very unpredictable changes (such as in my game the Holy Roman Empire dissolving from the inside).

Crusader Kings III is full of quality-of-life improvements over Crusader Kings II. The menus have been extensively redesigned and are easier to navigate around, and are much better about explaining what everything does. You’re given a handy checklist of things you can do which updates in real-time, such as wars that can be declared or people who need marrying. There is an enormous glossary with tooltips which will pop-up if you hover over a highlighted word or icon, which explains not only in-game mechanics but also medieval history.

There is also an excellent tutorial which manages to introduce the core mechanics in an elegant fashion without overloading you from the beginning. Be prepared that this is still a dense game though and you’ll need to be paying attention if you want to get the most out of it. To top it all off, the Crusader Kings III graphically looks much improved, with 3D-animated character portraits and a more lively and detailed world-map. It even sounds better, with a variety of different ambient pieces of music that appear to change based on what area of the map you’re looking at.

Crusader Kings III is one of those “just five more minutes” games, which hooks you in with various short term objectives and before you know it several hours have gone by. As King Malcolm, I was determined to force the Earl of Northumbria to accept my terms for peace in his aggressive war to capture Cumbria from me. Sadly, Malcolm was slain in battle outside Carlisle in 1072 (a full 20 years before he was “supposed” to die) leaving young Prince Duncan (age 12) to be the new King.

Whether the young king’s reign will be as great as his father is a story for another time. Crusader Kings III is full to the brim with these stories, and each time you play a new character you can construct a new saga. It truly brings history to life in a way few other games have achieved.