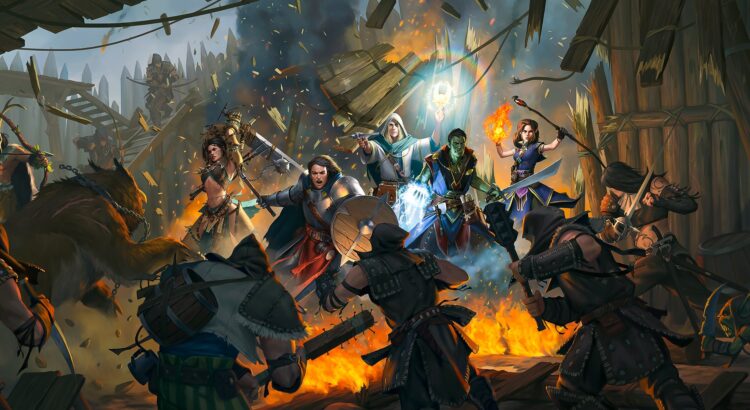 I must confess that I’ve never played Dungeons & Dragons. It’s always been a game I’d be interested in playing, and have researched from an academic point of view, but I never had a group of friends who were invested in it, or were geeky enough to get into it. Video games and novels have long been my outlet for fantasy fiction, and I have a respectful appreciation of Lord of the Rings.

So I had little-to-no knowledge of the Pathfinder RPG before I dived into the video-game adaptation of the roleplaying game, Pathfinder: Kingmaker. Originally released on PC back in 2018, this sprawling RPG has had a console release this year which includes all previously released DLC as part of the Definitive Edition.

The plot of Pathfinder: Kingmaker oddly reminded me somewhat of Frank Herbert’s Dune (perhaps because I’ve coincidentally been reading it while playing). The world of Pathfinder is feudal in nature, and you play as an explorer who has answered the call from Jamandi Aldor, a Swordlord of Brevoy, to embark on an expedition to the Stolen Lands, which have recently been conquered by a marauder known as the Stag Lord. Brevoy wishes to “civilize” the Stolen Lands and capture them via colonialism or conquest, whichever is more convenient. You are persuaded to take part on the promise of ruling the newly created kingdom as the baron should you succeed.

From here you travel with your compatriots into the Stolen Lands, meeting bandits, magical creatures and getting into all manner of adventures. The plot has some interesting political ideas, but ultimately my biggest enjoyment came from the good characters and the great voice acting for your core team. Linzi is a miniature bard and a kind-natured soul, while Amiri the barbarian is mostly happy when she’s in the heat of battle. Each character feels different and complimentary to your team in unique ways, and these styles can also affect how they perform in combat.

Battles can play out in one of two different modes. The first is semi-real time, where each character makes a series of moves that lasts six seconds. This plays essentially like an MMORPG, allowing you to queue up attacks and special moves on a hotbar. The other style is completely turn-based, where everything pauses between turns and characters move in a set order. Your companions can be set to auto-attack, or you can manage them individually. Selecting enemies in either mode is unfortunately quite clunky, taking time to select which character you want to attack and then what skill or weapon to use.

Considering the control limitations on consoles, the addition of the turn-based style (which is new to the Definitive Edition) is very welcome, but it does mean that more epic battles can take an inordinate length of time to complete. Thankfully you can swap between battle styles at your leisure (even in the middle of fights), allowing you to revert to real-time if you’re fighting easier enemies.

There are two halves to Pathfinder: Kingmaker; the first being the more traditional Baldur’s Gate-esque RPG (complete with an ornately elaborate character creation system), and the second being essentially a management simulator. Once you establish your kingdom, you have to go about the business of actually running it. This involves responding to events that occur and managing your assortment of advisors, assigning them to various tasks. You can also construct new buildings and upgrade settlements across your realm.

There are significant problems with the PlayStation 4 version of the game however. Firstly, there are quite a plethora of loading screens, all of which are slightly too long. When you get into a dungeon levels are fairly big so this problem is alleviated, but it was especially frustrating while traversing the overworld where you would have to load into random encounters or to enter new towns. The frame rate also chugs in a variety of places, even when not a whole lot is happening on screen, coupled with some occasional crashes. It’s a pretty game to be sure, but it should perform better than it does.

The menu system on PS4 is also extremely cumbersome, making inventory and party management a tiresome chore. To equip an item you need to open your general menu (arranged like a deck of cards), then select inventory from that menu to open the inventory, then finally equip the item. If you want to do this on other characters, you need to swap character then do the whole thing again.

On PC this would all be a couple of mouse-clicks, but it’s much more long-winded on console. You will also definitely want to turn off the random quips characters make while traversing dungeons unless you like hearing the same half-dozen phrases repeated ad nauseam.

Pathfinder: Kingmaker is a solid game, severely hampered by technical and control limitations on consoles. The best way to play remains the PC version, as it suffers from none of the PS4’s control problems and a lot less of the technical ones. Pathfinder: Kingmaker is a game positively overflowing with content, and will keep you entertained for countless hours if you wish it. It’s not a game that necessarily does anything new to reinvent the genre, but it shows great love for the original source material which should indebt it to fans of the tabletop RPG.