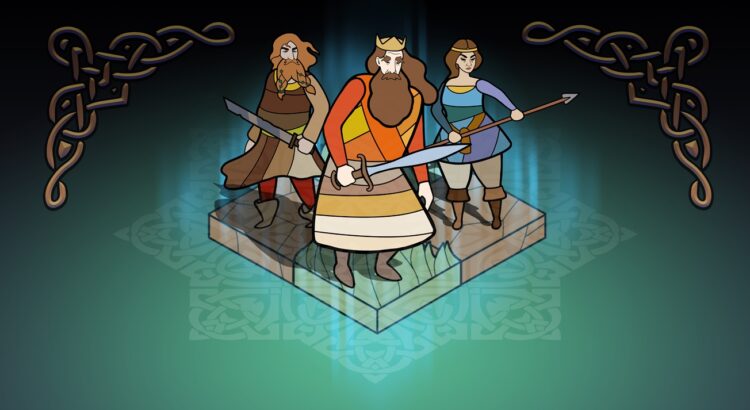 Great myths and legends stay with us, in part, due to their changeability. Arthurian legend is a good example of this. Since the Middle Ages, stories of the legendary king and his entourage have altered to suit new contexts and audiences. Arhurian legend – never a single story but always a dynamic patchwork of shifting tales – has inspired monarchs, playwrights, novelists, screenwriters, and most recently the developers of the narrative game Pendragon.

British studio inkle are past masters in the narrative game field, and with Pendragon they apply their experience to the rich tapestry of Arthurian legend. The changing nature of the legends, in which the same character may take on many roles across different tellings, is ideal material for inkle’s approach. The most notable thing this team brings to the Round Table is “ink”, their proprietary narrative scripting language. Previously used to power their games like Heaven’s Vault, 80 Days, and Sorcery, it’s the underlying framework for the game. What makes Pendragon different is that it is structured as a 2D turn-based tactics game, the story told through short missions played out on a chess-like grid.

What small part of the story that is fixed in place is gloomy. Camelot has fallen, Arthur is growing old, and the king’s renegade son Mordred threatens to bring all of Britain under his iron rule. The fate of the kingdom will be determined at Camlann, the site of a battle which represents the last chance to stop the tyrant. That is, if the player reaches Camlann – decisions are permanent in Pendragon, and it’s very possible to fail to reach the battlefield.

Upon starting the game, the player selects a character. Initially, only Guinevere and Lancelot are available, but several others can be unlocked by encountering them during runs. True to the highly variable nature of the game, each character has their own unique starting location. While all roads lead to Camlann, everything else that happens is up to the player – the route they take on an overworld map of Britain, their successes or failures in the tactical engagements, and the allies they recruit along the way.

As a narrative engine, Pendragon is tremendously dynamic and impressive. Conversations play out very differently depending on the player’s chosen character, and the number of potential party compositions is huge – and all adapted to by the game. Runs play out over a series of days and nights, and making camp provides the opportunity to hear and engage with a tale told by a member of the player’s party. These campfire stories are as expertly written as all of Pendragon’s dialogue, and provide a welcome complement to the wider, unfolding narrative. Given the number of decisions to make, the possibilities for new stories is enormous, and Pendragon has much to show to those willing to replay it often.

Unfortunately, the tactical element of the game is much less engaging. Here, inkle are exploring new territory and are unsteady in their steps compared with their confident mastery of narrative. The tactical combat is very simple, almost to the point of being boring. While some attempts are made to make the characters and enemies operate differently, this is undermined by the ponderous, one-tile-per-turn movement and the fact that all characters are killed by just one hit. This is most obvious during the final battle with Mordred. Particularly on lower difficulties, the would-be tyrant can be easily baited into standing on an adjacent tile to the player character – be it Arthur, or another hero who steps in for him. The climactic battle is sometimes very anticlimactic indeed.

There are other ways in which the tactical and narrative aspects of the game clash. Sometimes, interjections of dialogue occur between every single turn of a battle. Trivial questions from party members like “to where should we journey next, Guinevere?”, are an incongruous irritation while said unfaithful wife is trying to face down a trio of giant spiders. Similarly, the fact that allies who “die” on the field are miraculously brought back to life if the battle is won seriously undermines the game’s narrative aspirations.

Some of Pendragon’s systems are communicated poorly, at least at first. It is often not clear why certain locations can or cannot be visited on the overworld map, and while morale is a significant mechanic which may force a retreat, its actual workings are anything but obvious. Rations are a system that could have been dispensed with altogether. When they run low, there is no indication at all of where more might be found, and in practice running out of them is rarely of any significance, anyway.

Pendragon is an extremely dynamic and adaptable narrative experience, and one which makes excellent use of the rich source material of Arthurian legend. Players looking for a highly replayable experience will thrive in this depiction of Britain, with its plethora of meaningful choices, stained-glass graphics and serene music. Conversely, those drawn to the game for its tactical battles would be better served elsewhere, as this aspect of Pendragon is comparatively shallow and unsatisfying. For those looking to choose their own adventure, it’s this stark division between the two parts of the design that will determine how they receive Pendragon.