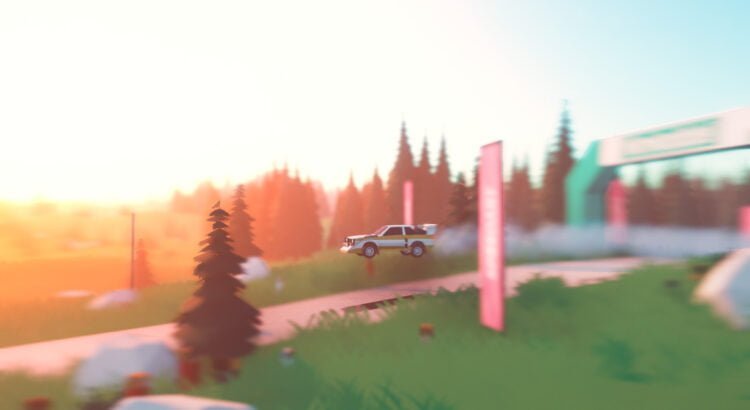 It’s been decades since Sega Rally 2 hit the Dreamcast and instantly became one of my favorite arcade rally racers ever. Since then, very few games if any have sparked such a feeling, even counting Sega’s own follow-ups to Sega Rally 2. Art of Rally came out of nowhere and caught my attention at first with its unique art style, and then quickly took my heart with its absolutely delicious gameplay once I finally got my hands on it.

At its core, Art of Rally is deceptively simple. You race around in a tiny rally car from a pulled back top camera angle. Controls are very arcade-like and incentivize you to make heavy use of the handbrake to fishtail in and out of turns while feathering the accelerator. In terms of tracks, you’re able to choose from a number of key locations like the very warmly colored region of Sardinia in Italy to the snowy slopes of Norway and cherry blossom lushness of Japan, each with its own road conditions and sections for you to pick from.

Developer Funselektor Labs masterfully dodges having to pay for vehicle licenses thanks to Art of Rally’s distinct graphics and how close to its selection of cars look close enough to the real things to be recognizable, but with no actual brand names attached. You’ll be able to zip around in all manner of rides, from normal cars that range in a number of categories, to 3-wheelers and even trucks.

Fan favorites like (chef’s kiss) the 1979 Rali de Monte Carlo winner Lancia Stratos, including its famous Alitalia liveries, as well as the 1997 Subaru Impreza WRC and the 1999 Mitsubishi Lancer Evo, all of them made famous by the Sega Rally games during the 1990s, are all present and accounted for, as are a bunch more you can unlock by finishing Art of Rally’s multi-decade spanning career mode. Not only do they look damn close to the real things for as simple looking as they are, but they also sound and drive a lot like I remember them, too.

It’s clear that the people behind this game care deeply about the sport just from seeing the amount of detail that went behind representing the aspects that really make rally different from all other types of racing. For as abstract as the levels might look initially, they’re brimming with personality thanks to the lush nature that permeates on the side of the road, and the close to real life period brands displayed in totems and gates, and of course, the groups of blocky people huddle and move out of the way as you drive through more populated areas of the map.

The actual racing in Art of Rally feels satisfyingly responsive and somewhat loose, as you’d expect in a rally game. The arcade part comes from not having to worry a lot about any sort of pre-race setup other than fixing up your car in case you crashed it too much during a race. The driving itself has plenty of depth on its own to keep you coming back for more, and that’s even more so thanks to the sheer amount of customization options you can pick from to race in, like different weather settings, racing sections, and of course, the ridiculous amount of vehicles to choose.

Aside from career mode, where you drive against A.I controlled drivers’ times in order to have a chance at the podium, you can also pick individual tracks to race in time attack where your times will be tallied up with your friends’ and online rivals’, as usual. Custom rally has you choosing from any number of sections from a particular country going up against any level of A.I you decide to go against and is a fun way to burn a few minutes playing if you’re not looking for anything particularly invested to do in the game.

In online events, you get one shot at making a mark on the leaderboards with pre-set individual and multi-section events that rotate every 24 hours and 7 days, a good challenge for those looking to dive into an event sight unseen. So far, I’ve managed to score a couple of good scores in these, even though I have no hope of competing with the top dogs in any way.

But perhaps the best mode outside of career has got to be free roam. In it you get to drive around a handful of tracks and explore them at your leisure, without any track delimitations or a clock ticking up or down. It’s an excellent way to get to experience Art of Rally’s excellent driving model and just dick about for as long as you like.

Better yet, during free roam you can nab a number of collectibles along the way that help unlock new free roam locations and other in-game bonuses. Since none of those pop up in the map in any way, it’s up to you to thoroughly comb through and find them. I found this mode to be particularly enjoyable and extremely relaxing since I could just cut free and not worry about anything other than just driving.

Art of Rally might not be the most realistic simulation of the sport nor the most graphically intensive, but its heart is definitely in the right place. The developers behind it have done a remarkable job making it feel like a rally experience while taking a wildly different and much more relaxed approach that helps set it apart from much more intense games like DIRT Rally 2.0 and WRC 9. It’s easily my favorite rally racer in the last few years.