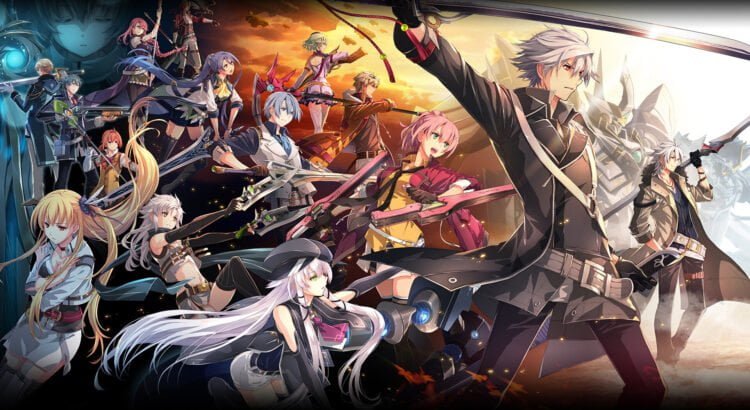 If you’ve ever tried picking up an anthology at a later point instead of the very beginning you’ll probably relate with my experience playing the Tales of Cold Steel games. Having had the opportunity to review its third entry last year having only played a few hours of part one, it was an amusing proposition checking out the story so far ahead of where I was in it. Still, Trails of Cold Steel III managed to be engaging, and thanks to its relatively fresh cast of playable characters, I felt like I didn’t miss a whole lot by reviewing it before even playing through the first two games in the series.

Now comes the chance to review the very last chapter, Trails of Cold Steel IV, and I can’t help but feel a tinge of déjà vu: it’s yet another game that’s chock full of references to previous events I haven’t really experienced myself yet, since in the period between having reviewed chapter 3 and starting this, I haven’t really gotten the chance to make any headway into the previous titles. But that really didn’t matter, as again it was really easy to get into what led to the events in Trails of Cold Steel IV, both thanks to how much exposition there is right from the beginning, and the comprehensive bookend material within the game, like the previous ones.

The world of Trails of Cold Steel is in the brink of an all out war as its biggest factions are gearing up for a massive battle, sparing no one, not even its civilian population, from serving the militaristic cause by enabling a mandate to conscript just about any able body into their armies. Caught smack in the middle of this conflict are the members of both new and old Class VIIs from Thors Military Academy, who have barely made it out of the climactic battle at the end of Trails of Cold Steel III which led to the cataclysm that’s just about to destroy all life. And that little nugget was started inadvertently by none other than series’ hero Rean Schwarzer, whose location is unknown after his capture by the Blood and Iron Chancellor, Giliath Osborne, revealed to be Rean’s real father. *shocker*

Trails of Cold Steel IV picks up right after that battle, with the main trio of the last game, Juna, Kurt, and Altina, recovering from their exertion in battle in a hidden away mage village, along with what’s left of their allies. The early hours of the game serve as yet another primer to the basics of Trails of Cold Steel gameplay, mainly its intricate and positively amazing battle system, as well as quick jots into its orb mechanics, but thankfully for long-time fans, it doesn’t last too long. After a quick run into some well known and familiar dungeon grounds, they get back to tip top shape and the adventure begins for real.

That’s not to say there isn’t anything new to this game in regards to those systems. The orb grid in particular’s got a pretty nifty upgrade which now allows you to equip two characters with the same prime orb, meaning that they can share powers and develop their own ability combinations. In combat that means that the further you’ve leveled their skills, the more you can get out of these gems, but not before upgrading their slots by spending a whole bunch of shards at the right shop.

The combat is as excellent as it ever was, and it’s good that Trails of Cold Steel IV doesn’t delve too long in tutorials letting you use S-Craft skills and tactical orders right away, which come in real handy at the many pinches it throws you in really early on. The base mechanics for fighting were already really solid in the previous games, so there wasn’t a whole lot to change up this time around, but they still did it. Due to the story events that led to the world being in the brink of destruction, elemental shifts are occurring everywhere, basically making certain elements more powerful or weaker than others depending on where you might happen to be in the map. That means that you have to keep an eye out for your party’s defense and make use of any advantages you might have against specific enemy weaknesses to whatever element might be boosted at the time. It adds an extra wrinkle to the overall gameplay which helps make it even more exciting to dabble in.

A lot of Trails of Cold Steel IV is traversing locales you’ve already been to in the previous games, mainly part III, but instead of simply relying on rehashing art assets for the sake of saving time, it’s clever about how it re-introduces these locations to you by not forcing any sort of missions or tasks. You go to them to catch up with story beats that were left hanging in the last game, as well as get reacquainted with the secondary and tertiary cast who themselves were shaken up a whole lot by all the drama in Trails of Cold Steel III.

And while the main focus is to find a way to keep the world from ending, after having invested this much time into playing through all of Trails of Cold Steel, you probably want to find out just what’s going on with Rean. And the game takes its mellow time getting to that, not before popping in just about every anime trope that there is as you run through it. Replacing Rean as the team’s instructor, returning Randolph is about as much of a Brock (from Pokémon) bro as they come, starting down every skirt he sees in his way. It’s comical at first, but it gets tiring quickly. Then there’s all the body humor that JRPGs sometimes love to overdo and well, you can see where I’m getting.

But strangely enough, despite all the attempts at the basest of fan service, Trails of Cold Steel IV is still excellent about true character development among its protagonists. I was happy to see new aspects of even some of the less seen characters that were once front and center in the first two games and how far they’ve come in their own little arcs, like Jusis’ acceptance of his brother’s dual role in the previous and upcoming conflict, or even Emma, who’s much more comfortable in her role in the grand scheme of things than she ever was.

Even knowing where all of them end up at this point of the story, I still feel compelled to see their journey for myself by playing through the rest of what I have left of Trails of Cold Steel. It’s a hefty proposition, considering just how long these games are, for sure. Then again, if there’s ever a JRPG series I’m interested in seeing to the end, it’s this one. Damn it if it isn’t one of the most complete worlds I’ve ever seen in a multi game spanning series, and one that manages to keep the overarching story going in the course of various chapters.

I tend to forget that Trails of Cold Steel is a sub-series of The Legend of Heroes franchise, and I haven’t really touched the older isometric entries, so add to that tally a couple more hundred hours. My work is definitely cut out for me for sure. It takes a truly special story to have me want to make that commitment, one that probably won’t be met anytime soon, but hey, it’s good to know that they’re all there when I can finally get to them.

Trails of Cold Steel IV is the series Return of the Jedi basically; it’s the culmination of everything that came before it and at the same time, for as much of a closer as it is to the Cold Steel story, it’s as welcoming of an entry as any of the others, if you are willing to invest some time and patience into learning the backstory. As I’ve said in my review of the previous game, Nihon Falcom’s put a lot of care into this franchise and it shows. I’m excited to see what’s in store for them in the coming year, especially the new entry in the criminally overlooked Ys series, with Ys IX: Monstrum Nox. As for you, Trails of Cold Steel, I’ll see you when I see you.