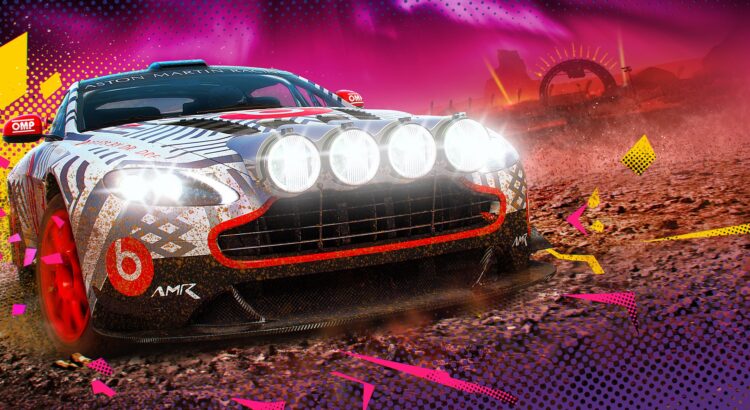 The DIRT series, which in 2010 was synonymous with a 4×4 carnival, had some changes in the current generation. The fourth game, with a more serious tone, tried to offer a little more simulation and yielded a spin-off series, DIRT Rally, a very technical and demanding title made for those who like true simulation. But now, on the eve of a new console generation, the fifth game in the series brings what fans of the franchise like the most: party!

Loud music, lots of color, neon and lights everywhere are the elements that return in DIRT 5. All that energy drink event atmosphere is back with a varied career mode. You’ll be met with a tree of options, choose your preferred challenges, win while meeting some extra goals, unlock the next branch of races and advance through many career chapters. Nothing new, really. The career gets a bit of love thanks to the participation of James Pumphrey and Nolan Sykes, who add a little narrative through the game’s podcast, the DIRT Podcast by Donut Media.

There are also challenges against specific drivers and some new and interesting racing disciplines. You’ll be facing more than 70 routes in ten countries, and you can finish the game by doing only the events that you prefer, but the fun of the game is to dedicate yourself to carry out all the activities.

The game is not very demanding in regards to progression. You just need to meet very accessible minimum times when required or reach third place in races, at the very least. But it is so fun to play, it pays to complete the campaign step by step. And the game remains very varied in events, including the unmissable Gymkhana. DIRT 5 is an arcade game, but requires a certain skill from the player to think fast, take challenging turns and jumps at speed and dominate its rugged terrain. It is a simple gameplay mechanic, but it is not dumbed down.

AI, in turn, is quite aggressive. The opponents go to great lengths to complete the route and they don’t care much to get you off the track for that. They are not disloyal and they do not push you with malice. They are aggressive enough, however, to not care too much about clean overtaking.

You’ll race on land, asphalt, snow, and even on slippery ice tracks. Another element makes racing much more interesting: real-time climate change. The climate factor adds up to the nice visual work of the game. During a race, you can encounter several natural obstacles to test your mettle, from heavy rain and snow to sandstorms that will severely impair your field of view.

And, finally, the cars. There are many and with a greater variety than other games in the series. We have buggies, prerunner pick-up trucks and famous cars from the rally world like the Subaru Impreza or the Ford Fiesta. But there are many different offerings like a Ford Mustang, Aston Martins, a few Porsches and many others.

What the game offers in its initial package is not much compared to other racing games. But it is enough to please fans. Basic things are missing like a replay mode and even the rewind option, which is common in Codemasters games. But there are some new fun additions. Besides the campaign mode, DIRT 5 has an offline multiplayer mode with split screen for up to four players, enough for a nice and friendly brawl between friends.

The online mode offers good news as well. Vampire, King and Transporter modes will have maps built for 12 player racing events and online races will be curated by the game. But the icing on the cake, for sure, is Playground mode. This mode allows the player to create, share and discover unique racing arenas. This mode practically “overrides” the argument that DIRT 5 does not bring that much content.

Empowering the community to create their own tracks and arenas is a genius move from Codemasters and will guarantee the replayability factor of the game for a long time. And, because it is about races and short events, you can still enjoy the game in a casual way, if the player has little time to dedicate to the game at any given time.

DIRT 5 represents more than the return of a franchise to its “noisiest” days. It is an extremely fun and enjoyable game that will serve as a bridge between the current and the next generation. This means that current console owners can already have an idea of what to expect in the future, while those who have already invested in the new generation will also be able to enjoy the game once they have a next-gen console in their hands.