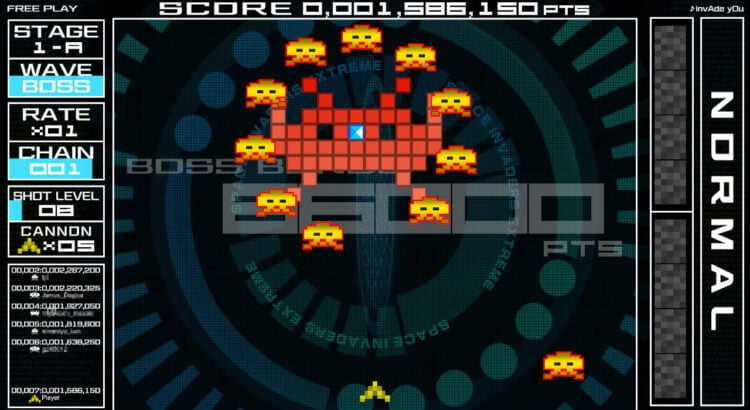 If there’s one constant in videogames it’s old arcade hits being brought back and again and again, whether through straight-up ports or modernizations that put a new spin on the basic formulas. Space Invaders Forever is one of the more recent examples of the latter, acting as a compilation of games with very different interpretations of Space Invaders.

Space Invaders Extreme, released originally in 2008, is more or less Space Invaders in the same way Pac-Man Championship Edition was Pac-Man — which is to say it’s a slightly different take on the original with a bunch of flashy visuals to accompany it. Extreme sees you playing through five stages blasting aliens using a variety of power-ups. After you complete one full playthrough, the levels begin to branch. The lower the level is on the map, the harder it is and the higher your point total needs to be to access it.

It is very much a different game from regular ol’ Space Invaders, but it still feels like that game at its core. Enemies still move in set patterns, slowly inching their way toward you, your ship only able to fire one shot at a time, and so on. But the core functions also have a fair number of twists. Extreme tracks a lot of different little things. If you take out enemies of the same color in succession, you get a power-up of the corresponding color that upgrades your ship’s firepower briefly (red is a bomb, green is a wide-shot, blue is a laser, and gray is a shield). If you take every enemy one row or column at a time, you earn additional bonuses as well. There’s a lot going on. It’s a bit much to take in at first given all the additional visual flair competing for your attention, but after a level or two, it all starts to become second nature. It’s a cool game!

Space Invaders Gigamax 4 SE is a multiplayer take on Space Invaders. Up to four players partake in what is basically regular Space Invaders set on a massive field, attempting to vanquish as many aliens as possible before the stage ends, at which point you fight a boss and repeat the cycle anew. Cooperative play is encouraged by allowing you to fire more powerful shots by staying grouped together, which is especially useful during boss fights given how hardy they are. It’s a pretty basic game on the whole, but it’s a fun novelty if you’ve got people to play it with. As a single-player venture, however (which is pretty likely for a lot of folks I’m sure, given current circumstances), there’s not much to it. It’s fine, but it’s impossible to escape the feeling that you’re getting a lesser experience given it is very obviously designed with multiple players in mind.

Arkanoid vs Space Invaders, on the other hand, is just Arkanoid except you’re fighting invaders in addition to breaking the usual variety of blocks. Instead of bouncing a ball around the field, however, you’re reflecting the invaders’ attacks back at them. Additionally, you can call upon your partner to activate special abilities that make clearing stages easier as well as spend currency on various power-ups to give yourself an edge, though they only last for one stage. It’s pretty standard fare Arkanoid, otherwise, which, hey — Arkanoid‘s always fun.

Playing it on the Switch’s touch screen makes it far more responsive since I can effectively put the paddle anywhere I need to in an instant. Having to hold the system in a portrait orientation is a bit odd at first (the system isn’t exactly designed with that sort of grip in mind), but it makes sense given the game needs a lot of vertical screen real-estate to properly display the field.

Space Invaders Forever is a fine collection on the whole, each of the game’s providing a good and fun dose of Space Invaders action while providing a decent amount of variety. But I kinda wish the collection had included some of the more inspired takes on Space Invaders (such as Infinity Gene, which saw the game slowly evolve from the traditional 2D field of the original game into a full 3D shooter) because there’s been so many other takes on the game over the years that have been languishing in obscurity that it would have been nice to see more get featured. The choices Taito made with this compilation are good, but more is always better when possible, especially when the opportunity to bring back some of the lesser known entries is involved.